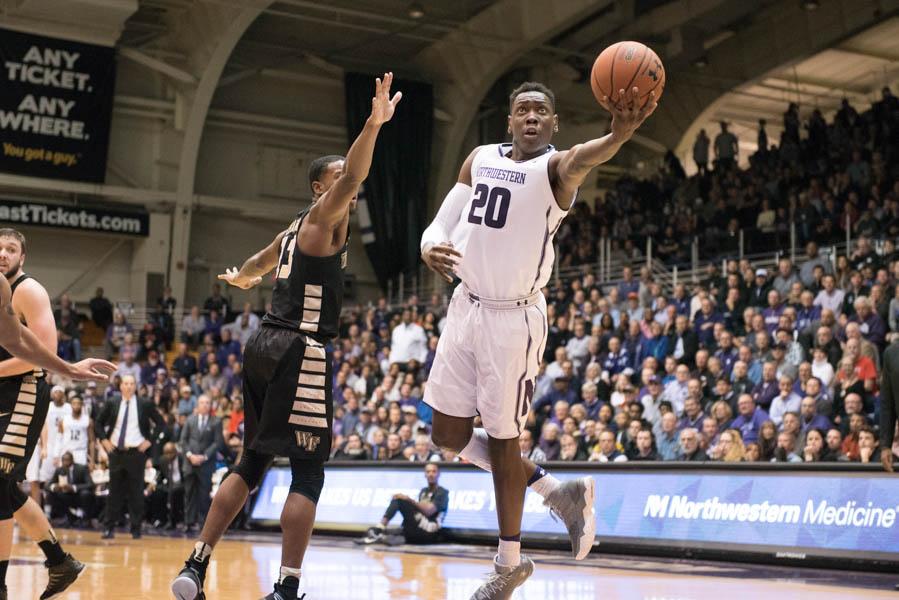 Scottie Lindsey scoops a shot. The junior guard led the way for Northwestern with 19 points in a victory against DePaul.

Minutes into their contest against DePaul, the Wildcats laid to rest the idea that Dererk Pardon’s injury would slow them down.

In the sophomore center’s stead, freshman big man Barret Benson opened the game with a score inside. Less than ten minutes later, senior power forward Sanjay Lumpkin had pitched in 9 points in the frontcourt, leading a balanced effort as Northwestern (6-2) surged offensively. That high-powered early attack ultimately led the Cats past the Blue Demons (4-2), 80-64, on Saturday in Evanston.

“The first half, everything was clicking,” Lumpkin said. “We were getting stops and we just stuck to our game plan. We knew we would get a lot of open shots.”

NU’s strong opening saw it firing on all cylinders. The team entered halftime leading 54-18, shooting 54.3 percent from the floor and 7-for-13 from deep. The Cats logged 18 assists on 19 field goals and dominated in transition.

Junior guard Scottie Lindsey’s breakout campaign continued, as he scored 16 of his team-high 19 points in the first half. He caught fire toward the middle of the opening period as NU continuously extended its lead.

“(DePaul wasn’t) really going over the screens,” Lindsey said. “Our guys just recognized (that) and I was open a lot of times, so we just capitalized on that.”

DePaul cut into the lead in the second half, making a push down the stretch, but it never seriously threatened to come all the way back.

The Cats’ offense slowed, but a forceful defensive effort — the Blue Demons shot just 32.8 percent from the field — ensured NU’s continued control after the break.

“We were really locked in on what we were trying to do against a couple of guys who are, in my opinion, pretty darn good players in (DePaul guards Billy) Garrett and (Eli) Cain,” coach Chris Collins said. “I thought overall the job Scottie and (sophomore forward) Vic (Law) did was really good.”

Despite his team’s commanding win, junior guard Bryant McIntosh made little impact, ending the game with just 4 points. The poor showing comes just one game after McIntosh awoke from a slump to score 19 second half points in Monday’s win over Wake Forest.

But overall, NU’s first-half performance showed the team at its best. Executing in transition and dominating in the half court, the Cats impressed in their first contest without Pardon and cruised to a victory.