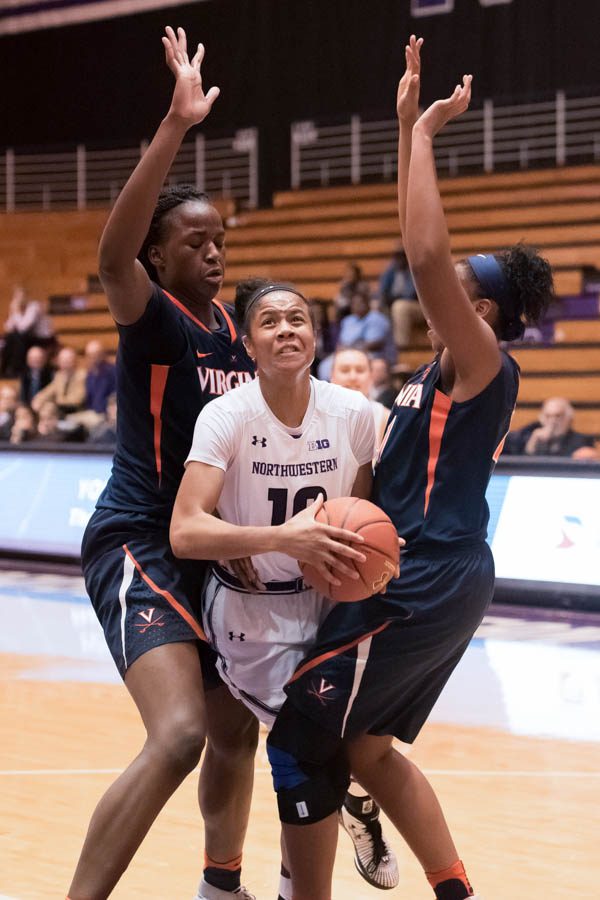 Nia Coffey fights through a pair of defenders in the post. The senior forward had another huge game to lift Northwestern past Virginia.

Facing a steep uphill climb in the second half, the Wildcats accepted, and overcame, the challenge.

Behind an extended 19-0 run spanning the third and fourth quarters, Northwestern (6-1) erased an 18-point deficit to take down visiting Virginia (5-2) on Thursday, 69-60. The win moved the Cats to a perfect 6-0 at home this season.

“It was just a hard fought, tough game, a physical game, with a lot of runs on both ends, and I just loved the way we came out in the third quarter,” coach Joe McKeown said. “That’s what we talked about — the second 20 minutes now are more important than the first 20 minutes, and I think our players came out with a sense of urgency to start the second half.”

After the Cavaliers took a 44-26 lead with 8:02 remaining in the third quarter, NU outscored the Cavaliers 43-16 over the rest of the game. That reversal gave the Cats a win in their ACC-Big Ten Challenge matchup and their first meeting with Virginia since 2004.

The Cats played a close one early, edging out the Cavaliers 18-17 after the first quarter. But Virginia stormed ahead thanks to a 16-2 run in the second and took a 39-26 advantage into halftime.

NU rallied in the second half, using the 19-0 run, capped by 12 consecutive points from senior forward Nia Coffey, to tie the game at 49 at the end of the third quarter and take the lead in the fourth. The Cats used the momentum to build a comfortable lead that they wouldn’t relinquish for the remainder of the game.

“We weren’t very aggressive on defense in the first half, so we just really stepped that up,” Coffey said. “We were patient on offense — we just attacked them — and then we got to the line and just started playing our game.”

Coffey led NU with her fourth double-double of the year, scoring 29 points and adding 14 rebounds. She has scored at least 20 points in four of five games she’s played so far this season.

Meanwhile, senior guard Christen Inman, who missed the previous two games with an upper-body injury, returned to the starting lineup Thursday. The Katy, Texas native chipped in with 12 points, two rebounds and two assists in her return.

“I was just dying to get back on the court with my teammates, just sitting on the sidelines and watching,” Inman said. “It was a great game to get back in and play.”

On the opposite side, four Cavaliers scored at least ten points: guards Breyana Mason, Dominique Toussaint and Jocelyn Willoughby and forward Lauren Moses. However, Virginia shot just 36.2 percent from field and wasn’t able to take advantage of 19 Cats turnovers, a season-high.

With a win against a power-conference opponent secured, NU will next take on Chicago State at Welsh-Ryan Arena on Sunday, wrapping up its four-game homestand.

“Defensively, we rebounded better, we stopped giving Virginia a lot of open shots they got in the first half and I like how we closed it out when we had to,” McKeown said. “They’re hard to play against. They make you have to work.”