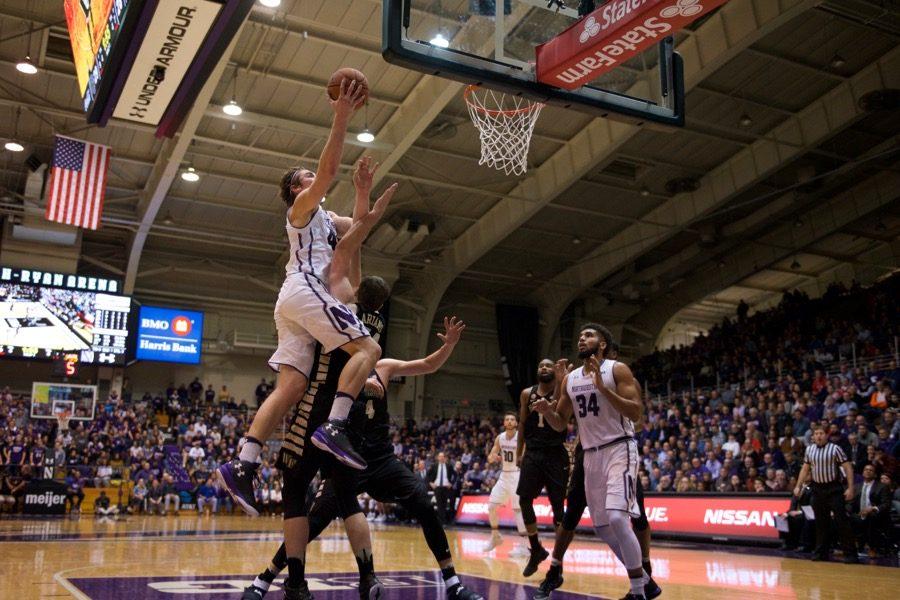 Gavin Skelly lays the ball in. The junior forward scored 11 points off the bench as the Wildcats held off Wake Forest.

For the third time this fall, Northwestern found itself in back-and-forth battle with a power-conference team Monday night. But this time, the Wildcats came out on the winning side.

In front of a lively crowd of 6,386 at Welsh-Ryan Arena, NU (5-2) took down Wake Forest (5-2), as a bounceback performance from previously struggling junior guard Bryant McIntosh allowed the Cats to reverse the results from earlier narrow non-conference losses to Butler and Notre Dame.

The game, played as part of the ACC-Big Ten challenge, was sloppy from the start, and both teams struggled from the field throughout.

“That was kind of a good old-fashioned fist fight,” coach Chris Collins said. “Both teams’ defenses were terrific tonight.”

NU shot 40.9 percent from the field, while the Demon Deacons hit on just 31.1 percent of their shots.

Wake Forest played from ahead for most of the night and challenged the Cats with their front line combo of 6-foot-10 forwards John Collins and Dinos Mitoglou. The Demon Deacons outrebounded NU 48-37 in the game.

But NU overcame that differential thanks to sterling play from McIntosh. He finished with 23 points on 10-of-16 shooting, a positive sign after he managed just 15 points on 6-of-29 shooting combined in his past two games.

“He’s a good player, everybody knows that,” Manning said. “He’s certainly capable of taking the game over like he did.”

Wake Forest sprinted out to a 12-5 lead early in the game, sending the ball into the post frequently and attempting to take advantage of its size advantage in the paint. But the Cats responded with a 7-0 run sparked by a 3-pointer from sophomore forward Vic Law and finished with a transition bucket from McIntosh that tied the game at 12.

When the Demon Deacons pushed their lead back to 24-16 just over 12 minutes into the game, NU again responded. Using a barrage of jumpers, the Cats went on a 10-0 run to take the lead right back. After a back-and-forth few minutes, Wake Forest took a 31-30 edge into halftime.

“They kind of hit us early,” senior forward Sanjay Lumpkin said. “We knew going into the half … we were right there.”

The Demon Deacons again blitzed NU early in the second half, pushing out to a 40-36 lead while their frontcourt pulled in offensive rebound after offensive rebound. Yet the Cats responded once more, as three straight McIntosh layups allowed NU to take a 44-42 lead with 11 minutes to play.

The teams continued to trade small runs going down to the final few minutes, and the score was locked at 53 with just over three minutes to play when McIntosh found a path to the hoop, driving and finishing a 3-point play.

“We were running a play, but I just saw a lane that I think you could drive a semi through it. So I just drove and got it up off the glass high enough to keep it away from Collins and got a call,” McIntosh said.

After that big finish, McIntosh continued to nail clutch shots in the game’s final minutes, hitting a baseline floater and a corner 3 to push NU’s lead to 6 with 1:02 remaining. All told, the point guard scored 10-straight for the Cats, who put the punctuation mark on their win with a pair of run-out buckets from Lumpkin as Wake Forest pressed in the game’s final minute.

NU is now 4-0 at home this year and, after McIntosh’s late game heroics, finally showed it can close out a game late against a solid opponent. The Cats will have another opportunity to take down a major-conference program when they host cross-town rival DePaul on Saturday.

“Any time you play local teams, there’s obviously a little bit more at stake,” Collins said looking ahead, adding that he’s glad his team has nearly a full week to rest up. “We’re tired right now. We need to get rest.”