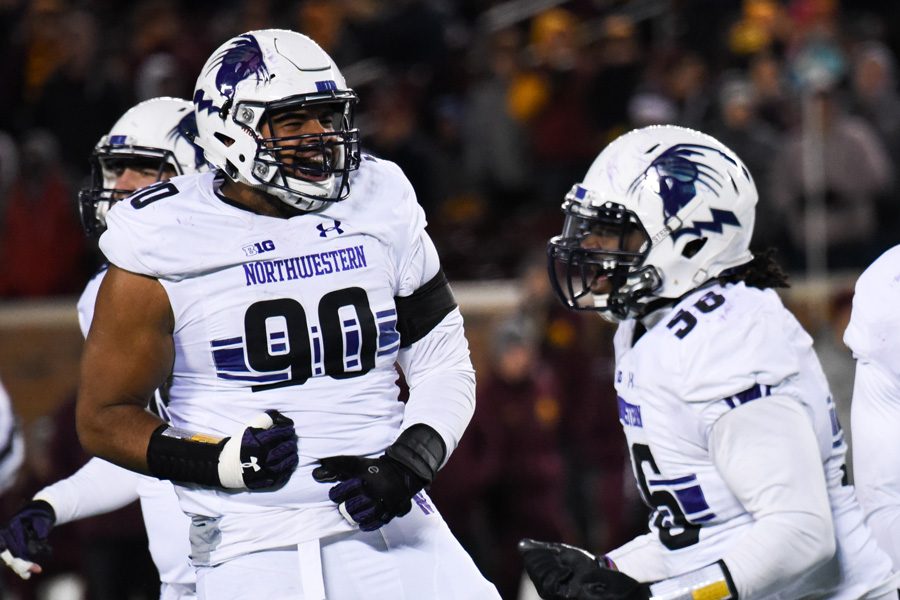 C.J. Robbins celebrates a play. The senior defensive end, along with fellow DL Ifeadi Odenigbo, will play their final games at Ryan Field this Saturday when the Wildcats host Illinois.

C.J. Robbins is the grandpa in Northwestern’s locker room.

After six years on the Wildcats’ roster — Robbins received an extra year of eligibility thanks to injuries suffered early in his career — the senior defensive end and team captain is finally down to his last regular season game of college football. At the end of his long journey, Robbins has found himself embracing the role of elder statesman.

“When all the freshmen got here, I was like, wow, they were going into eighth grade when I was in college,” Robbins said. “I try to be the older guy and just let people know how things will be.”

Also bidding farewell is senior Ifeadi Odenigbo, often the defensive end opposite Robbins, who has broken out in his final year to lead the Big Ten in sacks with nine. Robbins and Odenigbo each followed a circuitous path to their senior seasons, but the destination has been the same: Each has emerged this season as an impact player for NU’s defense.

Odenigbo’s journey started as one of the most highly-rated recruits of coach Pat Fitzgerald’s tenure. When Odenigbo committed in 2012, ESPN rated him as the No. 50 high school player in the nation and the best prospect in the state of Ohio.

Hype followed Odenigbo for most of his career but often failed to materialize into on-field results, with the defensive end recording just 12 sacks through his first three seasons. That all changed when NU took on Iowa this year and Odenigbo racked up a staggering four quarterback takedowns.

“(The defensive line has) stepped up big time. You see Ifeadi playing his balls off,” junior linebacker Anthony Walker said. “Those guys are really starting to put their stamp on the season, and hopefully we can keep going from there.”

Robbins has likewise seen his role grow as the season has progressed. He took over for Odenigbo as a starter at defensive end after a season-opening loss to Western Michigan, and his teammates promoted him to team captain after senior cornerback and team captain Matthew Harris started to miss significant time with an injury.

As one of the oldest players on the roster, Robbins has been instrumental in helping a young defense find its footing this season.

“Having C.J. around really helps the young guys out,” Odenigbo said. “(He hints) the freshmen, this is what to do, this is what not to do. He has a lot of input.”

Robbins also has the unique perspective of being one of the few players left over from NU’s victory in the 2013 Gator Bowl, which was the Cats’ first win in a bowl game since the 1949 Rose Bowl.

The significance of becoming the first group of NU players to win two bowl games is not lost on him.

“To get an opportunity to go to a bowl and get that second bowl win would be big in my eyes and obviously in past seniors’ eyes too,” Robbins said. “You just want to get bowl wins.”

But the Cats will first need a victory over Illinois on Saturday to reach six wins and guarantee postseason eligibility. As the game approaches, Robbins said his mind will be on his memories of the teammates and coaches he’s met during his time at NU.

For Odenigbo, the moment may have already passed. He said what he’ll miss most about being a Cat is playing in road games, though he’s still excited to finish out his career at home.

“I never thought this day would happen,” Odenigbo said. “Now I’m looking around and I see me and C.J. and (senior defensive lineman Greg) Kuhar, I’m like hey, I’m old now. But it’s been a fun roller coaster, and I’m just trying to make the best of it.”