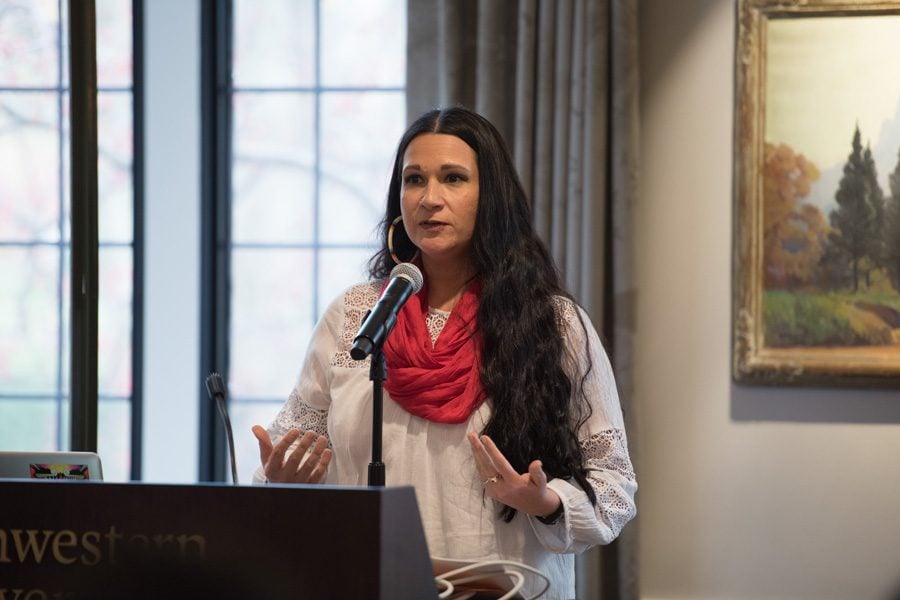 University of Denver Prof. Ramona Beltrán speaks to an audience of more than 50 people at NAISA’s annual Sand Creek Massacre commemoration. Beltrán emphasized the importance of learning history, understanding it and using it to move forward in a positive direction.

Members of Northwestern and Chicago’s Native American communities gathered Saturday to discuss the importance understanding the history of the Sand Creek Massacre at its annual commemoration.

More than 50 people, including professors and students, attended the event hosted in Scott Hall by the Native American and Indigenous Student Alliance. The event commemorated the 152nd anniversary of the Sand Creek Massacre, in which U.S. soldiers attacked a Cheyenne and Arapaho encampment supposedly under government protection. Speakers emphasized the need for the community to acknowledge the role of NU founder John Evans, who some say is responsible for the massacre.

Ninah Divine (Weinberg ’16), former NAISA member and coordinator of the Native American and Indigenous Peoples Steering Group, said it is important to acknowledge that both the University and Evans have benefited from Native American suffering.

The event featured a speech by University of Denver Prof. Ramona Beltrán, who emphasized the importance of acknowledging Native peoples’ role in U.S. history.

“(I hope) our indigenous children will see themselves and their families represented in the complex tapestry of American history,” Beltrán said. “They will know our stories are real (and) important and that, despite all efforts, we are still here. We are surviving, and we are thriving.”

In May 2014, NU published a report saying Evans was not directly involved in planning the massacre. But a University of Denver report published in November 2014 found Evans “deeply culpable” and disagreed “strongly” with the NU report.

Beltrán discussed the significance of language and said naming something allows people to call it into their consciousness and relate to it in a way that shapes their understandings and actions.

She also said historical trauma, which she defined as a collective and cumulative wounding across generations, is deeply connected to the indigenous concept of the interconnectedness of all things. She added that sociology Prof. Gary Fine identified the Sand Creek Massacre as the “single worst act of genocide in American history.”

Divine said the goal of the event was to commemorate and honor the victims, survivors and descendants of the Sand Creek Massacre, as well as pay tribute to the displacement of the Native community due to western expansion.

“The takeaway is to really hold your University and institutions you are involved in accountable for their actions and their history, and to know that history and how it affects communities around the country and around the world,” Divine told The Daily.

The event also showcased a display titled “Walking Through Sand Creek.” It comprised a series of banners with the names and family names of massacre victims and survivors — in English, Cheyenne and Arapaho — as well as scattered moccasins representing their struggle to escape. It will be displayed in Norris University Center from Nov. 21 to Dec. 4.

Weinberg senior Edward Duron said the event was an interesting way to hear more about the relationship between the Sand Creek Massacre and the University. Duron said he has been reflecting on NU’s relationship with history and appreciated NAISA’s work to put on the event.

“It’s easy to exist in a place and not know the history behind it,” Duron said. “As a Northwestern student, even though I don’t feel like the space is my space, I still benefit from it. I still take part in it, so part of that process is acknowledging the history.”

Beltrán said it is the responsibility of people to understand many institutions exist on stolen land. She said it is everyone’s responsibility to learn the true history, acknowledge it and contribute to healing from it.

“Learn the history of wherever you are,” Beltrán told The Daily. “Learn your own history.”

A previous version of this story misquoted a word in Ramona Beltrán’s quote. Beltrán said she hopes indigenous children will see themselves and their families represented in the “complex tapestry” of American history. The Daily regrets the error.