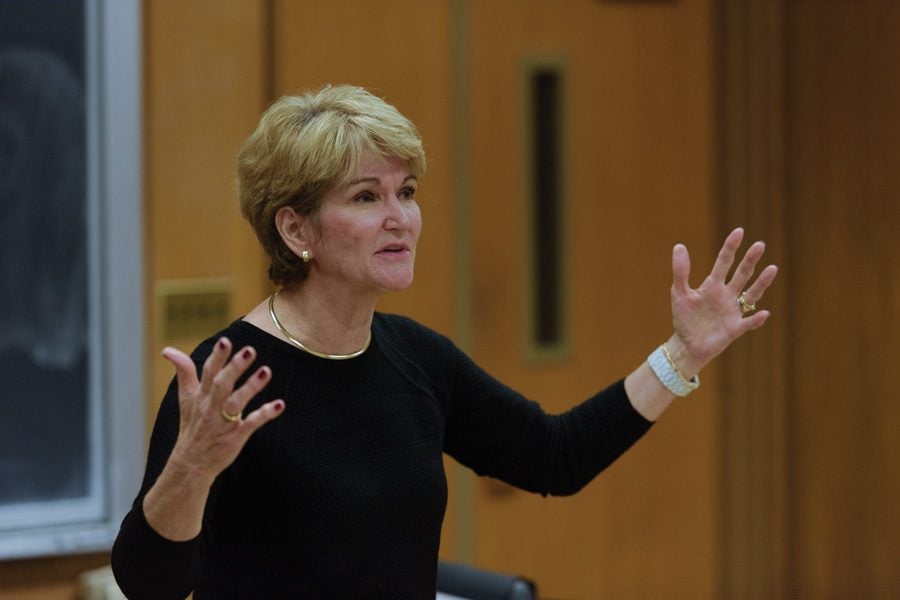 “Trump has broken the backbone of political correctness,” she said. “It has changed everything. We have returned to being Americans who speak exactly what we believe.”

Buchanan addressed an audience of about 60 people in a lecture room in the Technological Institute during NU College Republicans’ fall speaker event. Having served as former President Ronald Reagan’s treasurer, Buchanan spoke about how Reagan and Trump compare as politicians.

However, Buchanan did acknowledge the differences between Reagan and Trump’s personalities. She said although Reagan followed the “11th commandment,” his belief in not speaking evil of other Republicans, Trump has no problem speaking against other politicians in his party.

Buchanan said people have been too concerned and cautious of their words in fear of being called names, and that it is important to stand up for what one believes.

Weinberg freshman Marco Laudati, who attended the event, said he agreed with the message that healthy debate is crucial in developing political opinions.

But Brian Nebolsky, another Weinberg freshman in attendance, said Buchanan’s comments did not encourage open debate.

“It seemed like they were really trying to espouse the idea of creating open debates, but … anytime she’d give an example it would be like, ‘Trump said Rand Paul’s dumb,’ and that was his idea of an open debate, which feels more like an ad hominem attack,” he said.

Buchanan also talked about Trump’s economic policies. Trump plans to make cuts that will be “bold” and “dramatic” she said, comparing them to Reagan’s. These cuts have to be done quickly, she said, so that his presidency gains momentum.

Nebolsky said he was “surprised” by the comparison Buchanan drew between Trump and Reagan.

“My dad was a huge Reagan fan, and he always told me that Reagan was pretty diametrically opposed to Trump’s plan,” said Nebolsky, who is a Democrat. “From my personal research into the tax plans it seemed like they wouldn’t really be together.”

College Republicans president Weinberg junior Jack Stucky said he hopes that Buchanan’s talk will have eased the uncertainty about how Trump’s presidency will look like.

“A lot of people view this election as the end of their worlds right now, but I hope people are able to hear Buchanan speak and realize there might be some good things that can come out of the next four years,” Stucky said.

This story has been updated with new information about the attendance at the event.