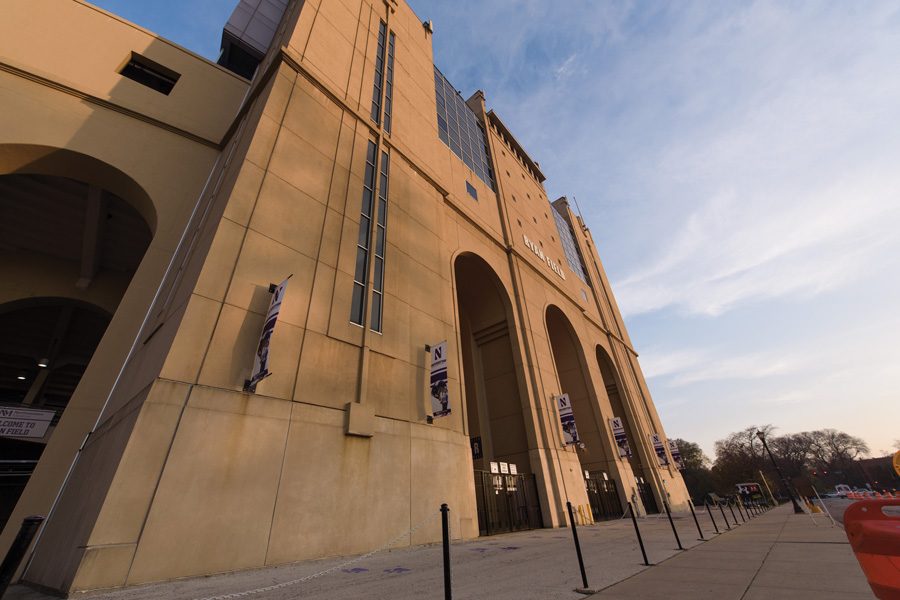 The exterior of Ryan Field. ASG’s Sustainability Committee has plans to reduce waste at Ryan Field and other NU athletic facilities.

Associated Student Government’s Sustainability Committee is developing a plan to reduce waste at Ryan Field and other Northwestern athletic facilities.

Although strides have already been made in promoting sustainability initiatives in other areas of campus life, committee member Dylan Kennedy said the committee’s attention has now turned to reducing waste produced during NU athletic programs and events.

“We’ve made a lot of progress in other areas, but sports facilities are very energy and resource intensive, so we’re trying to make the largest improvements there,” the McCormick freshman said.

ASG’s recent sustainability measures have largely focused on developments in residential dining, Kennedy said. Goals like composting and recycling food products have been at the forefront of the committee’s actions because those goals are more easily achievable in the short term, he said.

Committee member Jessica Collins, a Weinberg sophomore, said the committee’s attention to sustainability efforts at Ryan Field are ongoing and she hopes their work will lead to change next year.

“Last year, we were in a lot of talk with Sodexo management to try and facilitate what they do when buying the products to make sure they’re recyclable and compostable,” Collins said. “It didn’t happen this year, but we’re trying to put more pressure on them to make sure it happens next year.”

Communication issues between Sodexo and the committee have, at times, impeded progress, she said, making it seem like speaking to students about environmental issues “isn’t a priority” for Sodexo.

Sara Chapperon, Sodexo’s director of marketing, said Sodexo has been making adjustments based on the ASG committee’s work and has already introduced sustainability signage throughout the first level of Ryan Field. Chapperon said a potential zero waste program is being developed, but due to the many players involved in the process, Sodexo has to be mindful of these players as the planning progresses.

“We need to make sure we’re speaking with the right people at the right time to ensure we can move (the program) forward,” Chapperon said. “It’s not that progress is at all stalled.”

Although the Sustainability Committee already has made many efforts to reduce waste at the university, “the hardest step” is making students aware of these programs, Kennedy said.

Souvenir fountain cups, for example, were supposed to be a solution to recycling, Dobbel said, but a majority of the cups still end up in the trash.

Despite trouble spreading information to the NU community, Dobbel said the significance of ASG’s sustainability efforts at Ryan Field lies in the positive message the initiative sends to the surrounding community.

“Overall, Northwestern’s a very green campus, but that’s not including the stadium which is somewhere that many families come together to support Northwestern,” Dobbel said. “We want to say we’re not just here to gather and cheer, but we’re also here to better the environment.”