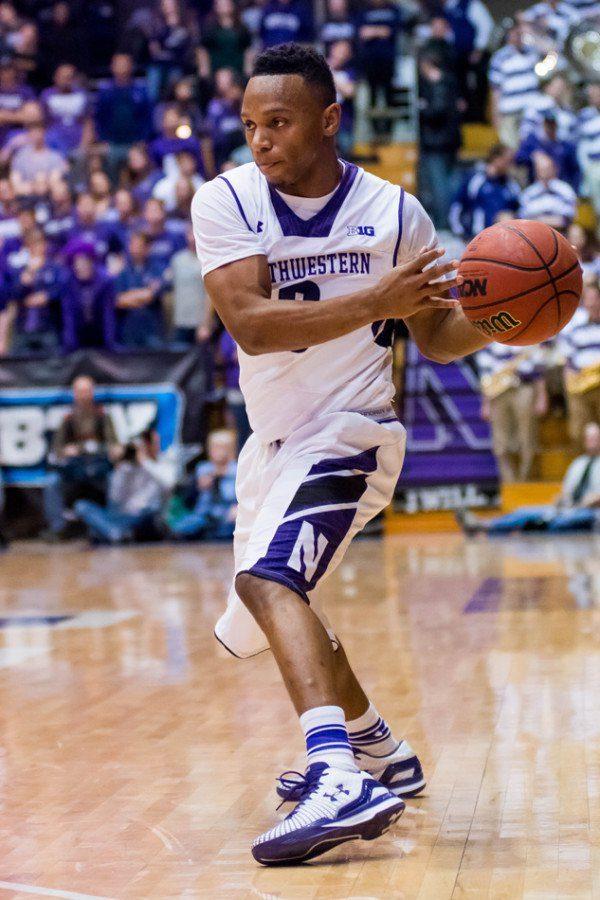 Johnnie Vassar prepares to pass. Vassar filed a class-action lawsuit against Northwestern and the NCAA on Monday.

Former men’s basketball player Johnnie Vassar filed a class-action lawsuit Monday against Northwestern and the NCAA, alleging the University used tactics to “run him off” the team so his athletic scholarship could be freed up for another player.

The complaint said Northwestern put Vassar on an “internship,” during which he worked as a janitor, and “berated” Vassar, alleging coach Chris Collins told the player he had no future with the team.

At a post-game press conference Monday, Collins said he had no comment on the suit.

The class-action suit argues that an NCAA rule requiring student-athletes to sit out a year after transferring to another program violates antitrust law. The complaint said Vassar, who is a current Northwestern student, reached out to multiple Division I basketball programs in hopes of transferring, but the programs said they would only accept Vassar if he could play immediately.

Vassar’s complaint was filed in the U.S. District Court for the Northern District of Illinois, Eastern Division.

Northwestern announced Vassar’s intention to transfer in March 2015, but the complaint states that Vassar had not signed documents to transfer at that time. Vassar arrived in 2014 and was part of Collins’ first recruiting class as Northwestern’s coach.

University spokesman Al Cubbage told The Daily in an email that the University believes the claim has no “legal merit.”

“We will defend the University vigorously,” Cubbage told The Daily in an email.

The complaint states the program attempted to free up Vassar’s scholarship to give to another player and stay under the NCAA-imposed 13-player scholarship limit.

The complaint alleges Vassar was placed in an “internship,” to “get him to give up his athletic scholarship,” that required him to report at 7 a.m. multiple days per week and work for two to three hours.

“Johnnie picked up trash and leaves, operated a leaf blower, put salt on sidewalks and under cars, wiped down the outside tennis court bleachers, swept the baseball diamonds, and lift heavy metal planks near the football field (hurting his shoulder),” the complaint states.

The complaint also alleges that Northwestern attempted to falsify “internship” timecards in order to feign misconduct on Vassar’s part.

Vassar was allegedly “informally” asked in March 2016 if he would take a cash payment equal to the remaining value of his athletic scholarship. The complaint said that after Vassar voiced his concern over violating NCAA rules, he was asked if he would be willing to move to a “merit based scholarship.”

The complaint claims that in April, Vassar was notified that Northwestern would be revoking his scholarship as Vassar indicated his desire to transfer but had not yet done so.

During the 2014-15 season, Vassar played 18 games for the Wildcats, averaging just under four minutes per game.