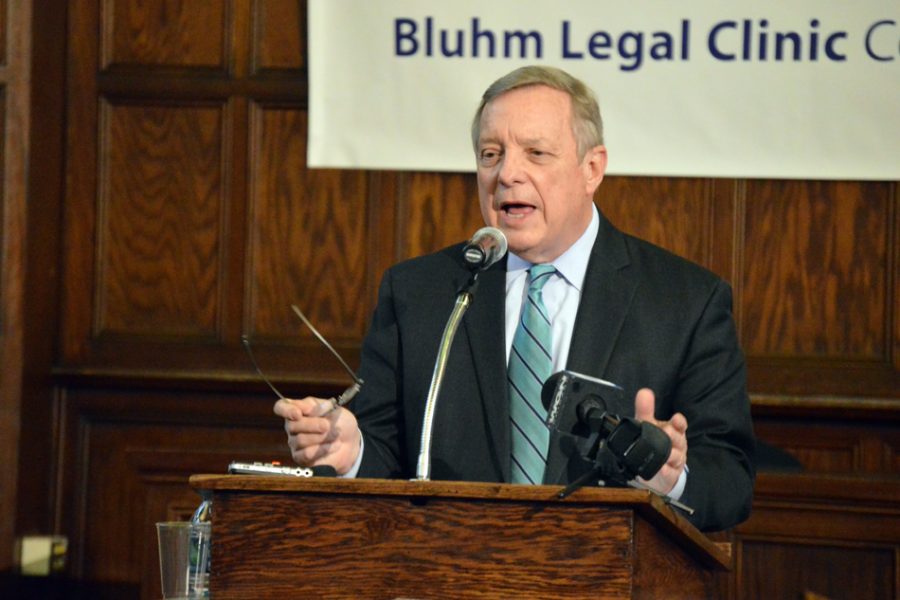 Sen. Dick Durbin speaks at the Northwestern Pritzker School of Law in 2015. An ASG committee aims to present the Affordable College Textbook Act, which was proposed by Durbin, at an upcoming Association of Big Ten Students conference.

Members of Associated Student Government aim to gather faculty and student support for a bill that would create public online textbook resources for college communities.

The Affordable College Textbook Act was introduced by U.S. Sen. Dick Durbin (D-Ill.) last October and aims to reduce the price of textbooks by using digital collections of textbooks, which are purchased by universities rather than individual students.

“We’re hoping to build a coalition, so it’s not just Northwestern students supporting this, but it’s a bunch of schools supporting this,” said Krasner, who is also the association’s director of public relations.

The committee plans to present the legislation during the conference, which will be held at The Ohio State University, Krasner said. In January, ASG passed a resolution in support of the bill and wanted to introduce the bill at last year’s winter conference, but was unable to do so, said committee member Shayna Servillas, a Weinberg sophomore.

Servillas said the committee hopes to get Durbin’s act included in the packet of legislation ABTS will lobby for during Big Ten on the Hill, the association’s annual spring conference in Washington, D.C.

If passed, the bill will make it easier for universities to implement open textbook resources by awarding grants to schools that submit proposals, Servillas said.

Rising textbook costs are a major concern for all students, especially those who are low-income, said McCormick senior Steffany Bahamon, president of NU Quest Scholars Network.

“It’s not just a massive economic cost, but it’s also a massive mental cost,” Bahamon said. “Oftentimes you don’t know what textbooks you need up until the very first day of class. Trying to scrounge … to find a book you can afford if your budget is pennies on the dollar can be very mentally taxing.”

Concrete plans to advocate for the bill are still in “beginning stages,” as the committee is focused on spreading awareness about what open education resources are and how a digital textbook pool would function, Servillas said.

One of the keys to successful implementation is collaborating with other universities, committee member Michael Deneroff said.

“The more people we know within a community, the better, because they can connect us to resources, or in the future if this does pass, help us with best practices,” the SESP sophomore said.

Having the support of faculty members is also an essential component of implementation because it lends “legitimacy” to the initiative, Servillas said.

Despite some concern about the results of this year’s presidential election and how they could impact Durbin’s act, she said the bill is “not a political issue.”

“The whole point of the bill is to make college somewhat more affordable, and I really don’t think any politician is just completely against that,” Servillas said.