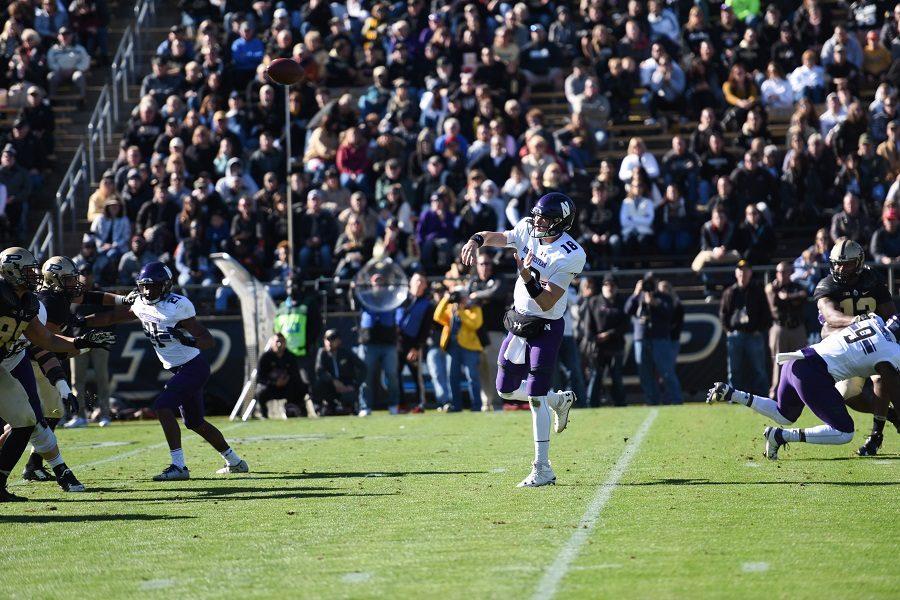 Clayton Thorson throws downfield. The sophomore quarterback set a career high with 352 yards passing in a blowout win over the Boilermakers.

WEST LAFAYETTE, Ind. — Another week, another laundry list of offensive milestones for Northwestern.

The Wildcats (5-5, 4-3 Big Ten) easily dispatched the Purdue Boilermakers (3-7, 1-6) by a margin of 45-17, racking up 605 yards of total offense in the process. Along the way, sophomore quarterback Clayton Thorson and senior receiver Austin Carr set a new round of team and personal bests.

Carr will continue his chokehold as the Big Ten’s leading receiver in catches, yards and touchdowns, having hauled in five passes for 92 yards and two scores. With 12 touchdown receptions this year, Carr is now tied with D’Wayne Bates for the most touchdown catches by an NU receiver in a season.

“It’s pretty rare air,” coach Pat Fitzgerald said. “(Bates is) arguably one of the best that’s ever put on the purple and white.”

On the year, Carr now has 75 catches for 1,102 yards, leaving him 19 receptions shy of the Cats’ single-season catch record and 143 yards short of NU’s single-season receiving yardage record.

Thorson had a career day as well, setting a new personal best with 352 yards passing while accounting for three scores through the air and another one on the ground. With 19 passing touchdowns this year, Thorson is now tied for third for the Cats’ single-season record, trailing Brett Basanez’s high-water mark of 21 set in 2005.

It’s the second time this season Thorson has set a new passing yardage mark for himself, surpassing the 320 yards he amassed against Duke.

“Our receivers were getting open, but (the offensive line) was playing real well,” Thorson said. “I had a lot of time back there. I think there were only one or two times where I was rushed to even make a throw.”

Next week NU faces Minnesota, which ranks 13th in the Big Ten in passing yards allowed per game. Look for Carr and Thorson to continue their march on the record books.