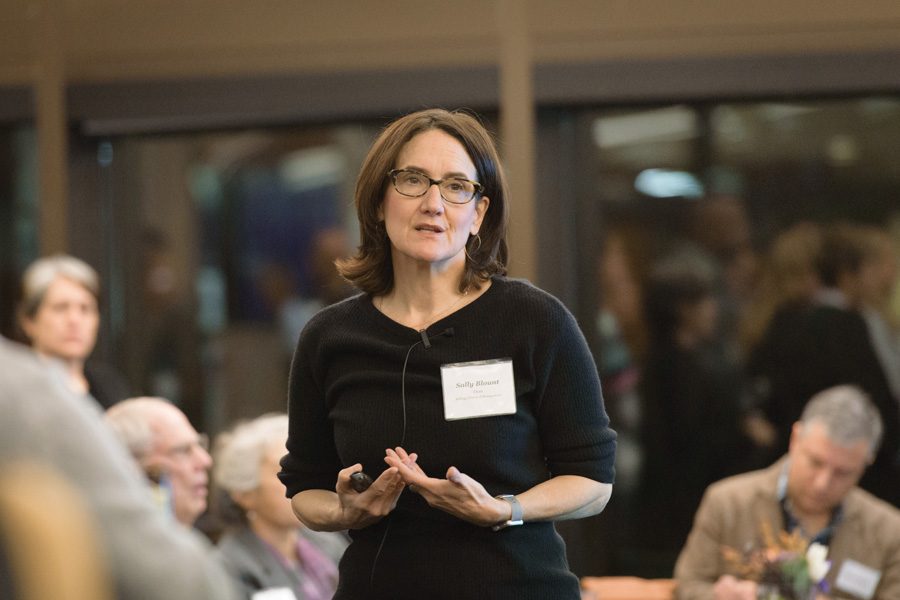 Kellogg Dean Sally Blount speaks at a town hall hosted by the Global Strategy Task Force on Thursday. Professors raised questions about where funding for programs would come from and how research projects in various departments could be impacted by the six themes the task force recommended in its report.

About 50 people attended the event hosted by the Global Strategy Task Force in the Allen Center. Members of the task force engaged with attendees to discuss their report, which was released last Friday. The report made nine recommendations, which included creating three new international sites and increasing support for language studies.

History Prof. Rajeev Kinra said the task force did “extraordinary work,” but he would like administrators to also consider infrastructure and programming on this campus.

“Where can we also improve here on campus, both in coordinating what’s already here, but also allocating some of the kind of financial resources they’re talking about to existing programs that will also help us improve the kind of education we can offer to our undergraduates?” Kinra said. “That’s really what it ends up being all about.”

Faculty members, who made up a majority of the audience, also raised questions about where funding for programs would come from and how research projects in various departments could be impacted by the report’s six central themes. The themes cover topics such as human conflict and violence, finite earth, and cities and migration.

It is still too early to determine exact sources of funding, said Kellogg School of Management Dean Sally Blount, who co-chaired the task force and led the town hall.

In response to worries about research being influenced by the administration, political science Prof. Elizabeth Hurd, who represented Weinberg on the task force, said there is “no way” that could happen.

“We have one of the most highly qualified, internationally recognized faculty in the world,” Hurd said. “These people are doing their work, and they’re doing it at the top of their game. It would be ridiculous for me or someone else on this committee to tell them what to do and how to do it.”

Some professors also said their voices were not represented in the report.

Hurd said this oversight may have been a result of the task force having only one representative from each of the university’s schools. Hurd said she recognized the limitations of being the “one faculty member representing 600-odd faculty members.”

“I’m very respectful of my colleagues who feel like, ‘Hey, I’ve never heard of her,’ or, ‘She’s in a field that’s very different from mine,’” Hurd said. “Those concerns are real and palpable and I respect everyone who has them.”

Concerns voiced during the town hall will be passed on to Provost Dan Linzer, University President Morton Schapiro and various deans, Blount said.

She added that acknowledging these concerns is necessary for creating change.