Black representation in music discussed during State of the Black Union 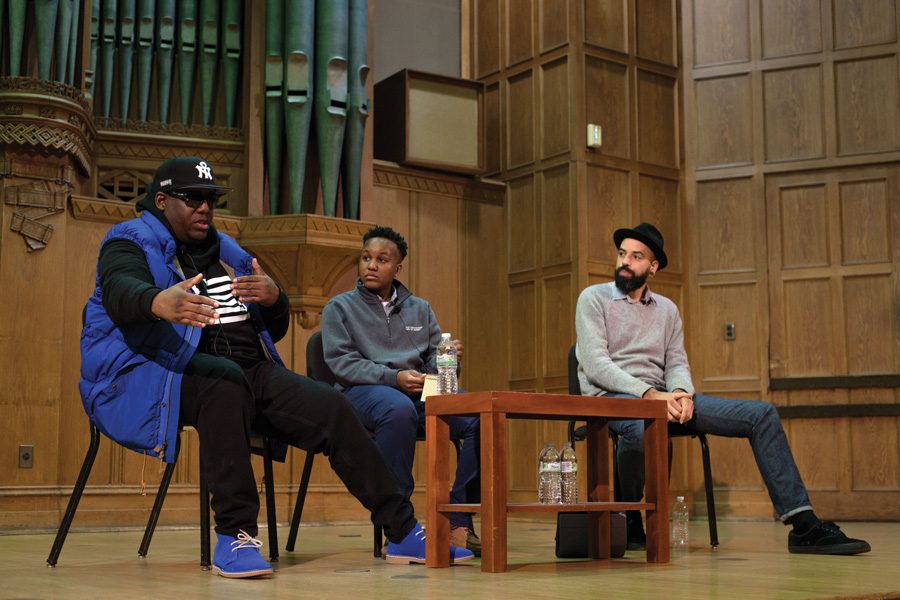 MSA assistant director JT Turner (center) talks with Rapper Kool Moe Dee (left) and Afro-Punk festival creator James Spooner during this year’s State of the Black Union. Both artists discussed black representation within the punk and hip-hop communities and the commercialization of both musical genres.

Hip-hop and punk came together at Lutkin Hall on Thursday night as Grammy Award-winning rapper Kool Moe Dee and Afropunk Festival co-founder and tattoo artist James Spooner spoke about black representation and the corporatization of both genres at this year’s State of the Black Union.

During the event, held by For Members Only and moderated by Multicultural Student Affairs assistant director Jordan Turner, Dee and Spooner spoke about their experiences working in the music industry.

Spooner spoke about creating the 2003 documentary “Afro-Punk,” which explored the experiences and culture of black people in the then overwhelmingly white punk scene. The documentary sparked the annual Afropunk Festival, celebrated in New York and other cities such as Paris and London.

As a young man, Spooner said, he felt supported and understood in the punk community. However, he said he was aware of how historically white that culture was.

“It was a very empowering place,” Spooner said. “But at the same time, I was recognizing that there was this understanding that, as a black person, I wasn’t really supposed to be part of it, or I wasn’t supposed to remind the white people that I was friends with that I’m a black person.”

In response, Spooner said he decided to dig deeper into the history and community of black punks, leading him to create the 66-minute documentary and later the Afropunk festival. He said he left the festival after its third iteration when it became over-commercialized, something he said separated it from its original punk culture. However, he said he still believes the festival a space for black people who enjoy funk to celebrate both identities.

Dee, the first rapper to perform at the Grammy Awards, said he has seen a similar commercialization of his music genre. During the 1980s, he said, hip-hop artists who gained popularity when their styles became fashionable were given money and luxuries by “corporate America,” affecting their songs’ lyrics and themes. Despite these issues, he said, there is a wide range of themes and ideas in hip-hop music.

“Hip-hop’s voice isn’t one voice. It’s many different layers of voices,” he said.

Dee also said hip-hop’s lyrics are influenced by its historically male-dominated mindset, in which black women were oversexualized and underrepresented.

During the event, no one mentioned this week’s election of Donald Trump for president.

Spooner encouraged students with creative passions to pursue them and become trailblazers in areas that interest them.

“Just because it’s never been done before doesn’t mean you can’t do it, you know?” he said. “Genius springs from just being like, ‘F–k it, man! This is the way I want to do it’.”

SESP junior Michelle Sanders, an FMO leader who attended the event, said the group decided to invite Spooner and Dee to campus because it wanted to look at different narratives within genres of music central to black communities.

“I really enjoyed hearing both perspectives on the erasure of black women and queerphobia in both genres and looking at how … white supremacy and white male hetero perspectives are dominating within the genre as it becomes more like a business rather than a form of expression,” she said.