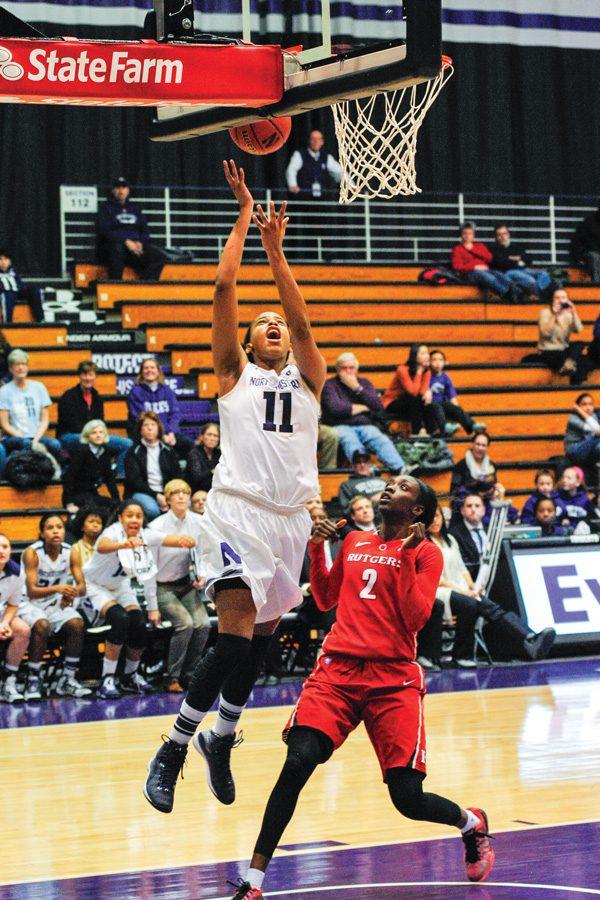 Lauren Douglas goes up for a layup. The fifth-year forward was a key player for Northwestern two seasons ago and missed last year with injury.

As a new season dawns, Northwestern is hopeful that its new additions, particularly in the frontcourt, will allow for improvement from last season.

The first challenge for coach Joe McKeown’s squad comes at home on Friday afternoon against Hampton, and the team likely will showcase a deeper rotation than last year.

“We have six new players, and I think we’re in the process of blending them in during the preseason and through November, December, non-conference,” McKeown said. “As we get ready for Big Ten play, hopefully that’ll be a positive experience.”

Of those six new players, four are freshmen, one is transfer center Oceana Hamilton, and the final one is fifth-year forward Lauren Douglas, who returns after taking a medical redshirt last season. Five of the six new additions are listed as forwards or centers on the roster, positions in particular that did not have much depth last season.

The “big three” made up of senior forward Nia Coffey and senior guards Ashley Deary and Christen Inman is sure to lead the team, but Coffey believes Douglas has the potential to contribute in a big way.

“She’s tall, and she’s a fifth-year senior, so she has a lot of experience to help everyone, especially the freshmen and underclassmen,” Coffey said. “She can stretch defenses, and she can be a very lethal option for us on offense.”

The question of whether Douglas is fully healthy remains, but she scored six points in fifteen minutes of action during the NU’s exhibition game against Illinois-Springfield last Sunday. Douglas expressed excitement to get back on the court in a regular season game and had her own reasons to predict improvement.

“I think we can do everything better; we have a lot of scoring power,” Douglas said. “We also have a lot of people that can defend.”

The Cats’ weaknesses may not be fully tested in Friday’s game, but the contest will be an important indicator of how the new players will be integrated into the lineup.

Though no one yet knows how NU will improve on its rebounding and replace departed guard Maggie Lyon’s shooting, some of the questions may start to be answered as a new season begins.

“For everybody it’s like spring training: you get to play somebody different and play against people who are preparing for you just like you’re preparing for them,” McKeown said. “The biggest thing for us is getting our confidence, learning how we can blend in some of our new players.”