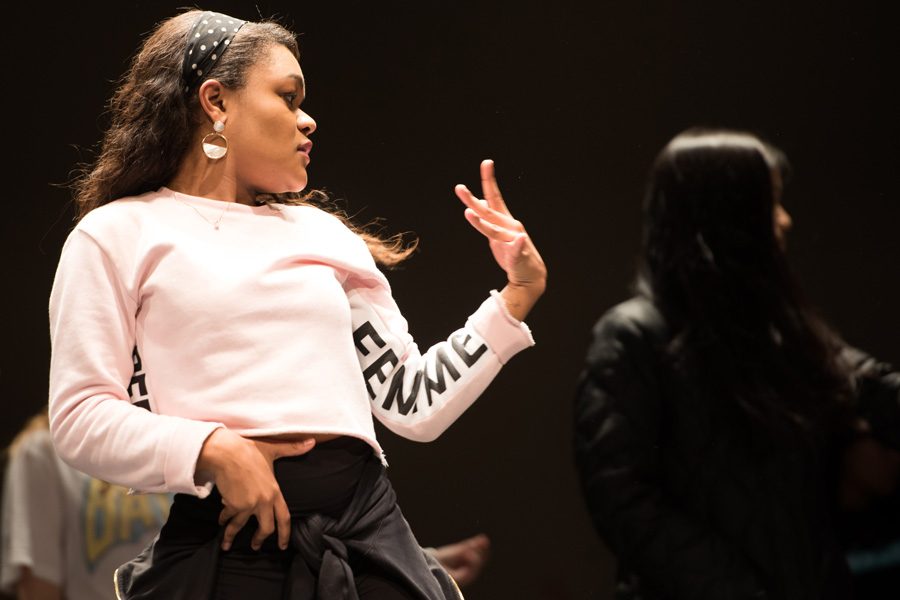 Jillian Berry strikes a pose during a rehearsal for ReFusionShaka. The show premieres Friday in Cahn Auditorium.

No one predicted the meteoric rise of ReFusionShaka’s popularity in the Northwestern community when it started in 2010. Six years later and with more than 100 dancers involved, the event has turned into a symbol of unity for the dance community on campus.

“It was definitely something that I felt a lot of pride in doing,” said Yuchi Chiu (Communication ’14), who worked as an assistant producer for Boomshaka his freshman year. “To have three key student groups that are involved in the arts come together really says that we are one dance community at Northwestern.”

ReFusionShaka is the annual collaboration of three student dance groups: Refresh Dance Crew, Fusion Dance Company and Boomshaka. The show has rapidly grown out of the McCormick Foundation Center Forum stage, where it was initially staged, to eventually selling out Cahn Auditorium, which can seat more than one thousand people. This year’s ReFusionShaka will premiere Friday.

“The main inspiration for ReFusionShaka is that we realized each group had their own specialties about them that we were always interested in doing but never had a chance to participate,” said Jasmine Hubbard (Weinberg ’13), one of the founders of ReFusionShaka.

Hubbard, previously a member of Refresh, worked together with the three groups in 2010 to help members get to know each other and build a tighter dance community at NU. The diversity of the dancers’ experience with creative production processes helped ReFusionShaka take off logistically in its first year, thanks to the heavy focus on organizing and publicizing the show, Hubbard said.

Moreover, with each group’s distinct approach to dance, ReFusionShaka was an opportunity for members from groups to gain experience in other styles, Hubbard said.

“Each group was busy doing their own thing — Refresh with our street style, Fusion with their more dance company outlook … and Boomshaka with their modern dance twist and musical uniqueness,” Hubbard said.

The bonds that resulted from this three-way partnership helped pave the way for members to move from group to group as well. Chiu helped publicize and organize the first ReFusionShaka, but in the spring of 2011, he decided to join Refresh and perform in their subsequent shows.

Others managed to find the time to perform for two groups simultaneously. Weinberg junior Grant Hou, currently the artistic director for Refresh, is also an active member of Fusion, joining both groups during his freshman year.

Hou is also part of ReFusionShaka’s executive board, in which two or three members from each participating group are selected to speak for their organization and help shape the structure of the annual show. Now, Hou helps influence the evolution of ReFusionShaka and works to improve the show’s artistic content from previous years.

“For example, in years past, opening and closing has always been thrown together last minute,” Hou said. “We put a lot more work into making (them) a bigger production this year.”

As the event has grown in size and popularity over the years, the mindset toward rehearsing ReFusionShaka has shifted dramatically within the groups. Just four years ago, ReFusionShaka was more casually “thrown together,” said McCormick senior Andre Mohring, who serves as one of Boomshaka’s artistic directors. After the show moved to Cahn, though, new performance material was created targeted to the audience attending the show, he said.

For Boomshaka, efforts to design and create a program specific for the show were initiated after the board realized ReFusionShaka was turning into one of their biggest performances, Mohring said. Similarly for Fusion, rehearsals intensified with the growth of ReFusionShaka, said Weinberg junior Mimi Khawsam-ang, public relations chair for the group.

“It feels like there’s more at stake now, so people have definitely been getting their stuff together more,” Khawsam-ang said. “Practices have gotten a little more intense just because, with the amount of people coming, the choreography needs to be more interesting.”

For NU alumni who participated in ReFusionShaka, though, watching the event get bigger is an indicator of the sheer amount of talent on campus and, on a deeper level, the strengthening of the college dance community.

“ReFusionShaka was the show that got me interested in dancing in the first place,” said former Refresh member Kingsley Leung (Weinberg ’15). “It is a really cool thing to bring the entire campus together to enjoy this form of art.”

Hubbard, who has watched ReFusionShaka grow for three years after her graduation, said she finds the pace at which the show expanded amazing, especially considering its humble origin story.

“I absolutely love that it’s still thriving, and it seems to improve more and more each year with all the teams continuously growing and pushing their limits,” Hubbard said. “It’s a great example of how lots of different kinds of people can come together with one common passion and attract a huge audience.”