Paxton: Wildcats will improve markedly from last season, but just how much is up in the air 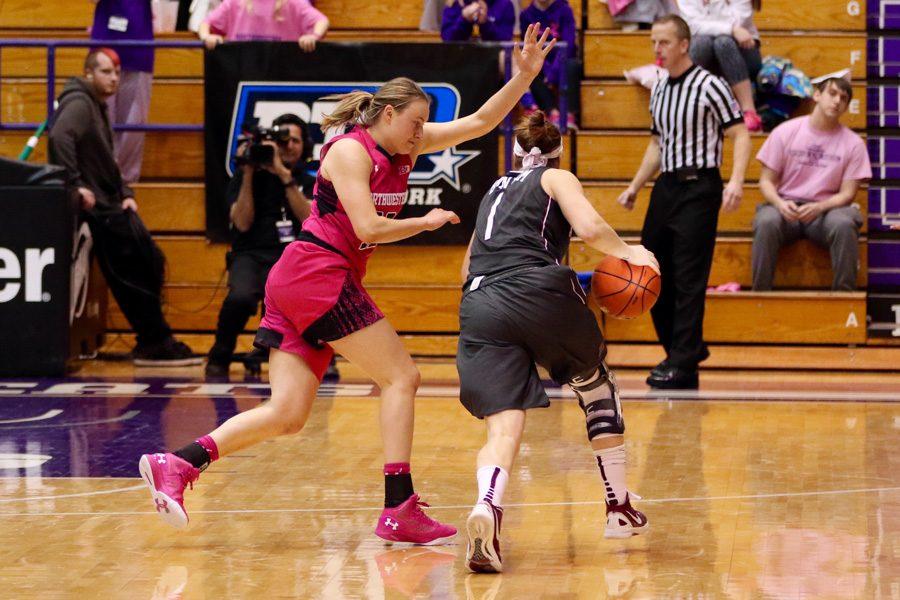 Lydia Rohde tries to stay with her player defensively. The junior guard’s development could be critical to Northwestern’s development this season.

Of the myriad potential causes for Northwestern’s Big Ten tumble last season — lack of depth, poor rebounding, inconsistent shooting or an inability to execute in late-game situations — none have been magically solved in the offseason.

Nonetheless, the Wildcats will be far better than last year’s team, which slumped to a 4-14 conference record. And I’m not alone in that train of thought: NU received a handful of votes in the preseason coaches poll, and ESPN bracketologist Charlie Creme listed the Cats as one of the first four teams out of the NCAA Tournament in his preseason projection.

It’s almost inconceivable that a team led by forward Nia Coffey, a legitimate All-American contender in her senior season, and flanked by a pair of fellow senior standouts in guards Ashley Deary and Christen Inman, could win only two games in February. I highly doubt NU will succumb to another 60-point performance or lose a game at the buzzer because of a wonky deflection in the final seconds.

Coffey said she focused this offseason on her midrange game, which is a scary thought for opposing defenses given she averaged better than 20 points per game last season. Add in Deary’s uncanny defensive prowess and Inman’s steady, consistent offensive output, and the Cats have a trio that can play with top-10 teams Maryland and Ohio State.

NU won’t be favored in those games, but there isn’t an unwinnable game on the Cats’ schedule. Plus, the Big Ten drops off significantly after the Terrapins and Buckeyes. Indiana, No. 23 in the preseason AP poll, overachieved last year. Michigan State will miss the recently departed Aerial Powers. Michigan has star Katelynn Flaherty but an uninspiring supporting cast.

And so on and so forth. You get the point: there is an opportunity for NU to lurk near the top of the Big Ten, and the Cats have the weapons to do just that.

But let’s talk about those weaknesses I mentioned. Depth shouldn’t be an issue, since coach Joe McKeown has several legitimate weapons on his bench. Unlike last year, the reserves should offer a spark, something beyond a brief respite for the starters.

The Cats should hit the boards more consistently this season, but counting on freshmen to make an immediate impact is always perilous. Outside shooting is a significant concern, since Maggie Lyon has graduated and has no natural heir.

Late game execution is another question mark. Sure, Coffey, Deary and Inman are a year older and more experienced, but that doesn’t guarantee that they’ll make tough shots in crunch time.

Maybe other players, like junior guard Lydia Rohde, Lyon’s likely replacement in the lineup, and sophomore forward Pallas Kunaiyi-Akpanah, who started much of last season, can elevate their games significantly. If they do that, the Cats could roll past a highly touted team like Maryland or Ohio State.

Consider me skeptical. With that said, NU simply has enough talent to be in the upper echelon of the Big Ten and return to the NCAA Tournament. This season won’t be like last season. The question is just how much better the Cats will be.