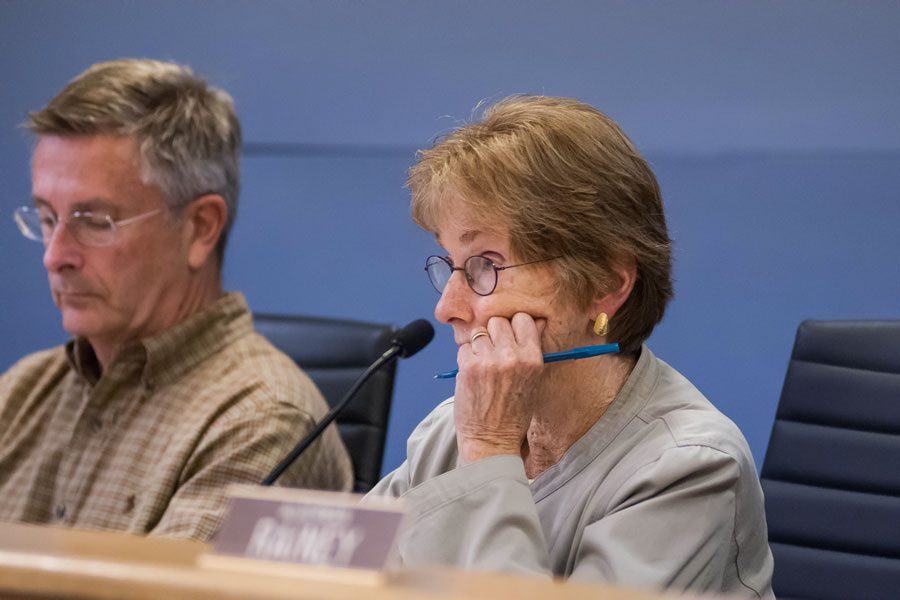 Ald. Eleanor Revelle (7th) attends a city meeting. Revelle moved on Monday to remove an item in the proposed budget that would have extended metered parking hours.

Aldermen expressed support to increase the cost of monthly city parking garage passes by $10 from last year as they continued 2017 budget discussions at City Council on Monday.

Ald. Eleanor Revelle (7th) proposed to delete an item from the budget that would expand the hours in which parking meters charge because she said she received many complaints from local businesses.

Expanding parking meter hours as proposed would increase Evanston’s revenue by $290,000. Ald. Melissa Wynne (3rd) said she also supported the deletion of the parking meter increase from the budget. She instead proposed an additional $5 increase in monthly parking garage fees to raise revenue.

A monthly parking pass currently costs $85, and because of a surge in demand, the pass was originally proposed to increase by $5. Wynne proposed increasing the cost an additional $5 to make the total cost $95 per month.

Wynne compared the price to park in Evanston to other parking garages, such as ones in Oak Park which cost $132.50 per month as a sign that Evanston should raise its prices too.

The $10 increase would raise about $320,000 in revenue, assistant city manager Marty Lyons said.

“Looking at these other rates, even the $100 range seems to me to be a pretty good bargain,” Ald. Donald Wilson (4th) said.

Earlier in the meeting, residents urged aldermen to listen to constituents about a waste transfer station in Evanston.

Residents said the waste transfer station at 1711 Church St. hurt the surrounding neighborhood with its odor, noise and increased traffic. During public comment, residents told aldermen they should spend city money in ways recommended by community members in a survey conducted in August and September.

The City of Evanston approved a settlement from a lawsuit in February with Advanced Disposal, the company that manages the waste transfer station, which gave the city $1.2 million to allocate.

In the survey, 81 percent of respondents said they wanted the city to monitor the environmental impacts of the station on the community.

Janet Alexander Davis, a member of the environmental justice subcommittee of Evanston’s environmental board, said the city should be testing the water and air surrounding the waste transfer station so residents can be assured there isn’t an additional health risk.

“Without monitoring of this site’s water, soil, air and more, is there health risk for our people, the city’s people, that has not been looked after in a very professional way?” Davis asked the aldermen. “I ask all nine of you to think how’d you feel about a business such as this residing near your lovely home.”

Ald. Delores Holmes (5th) expressed approval for potential job requirements described in a Friday budget memo for the equity and empowerment coordinator position, a new city position introduced in the budget this year that would address racial and gender equity in Evanston.

Holmes said the position as outlined in the revision now had “teeth.”

“We need to be clear that this is just not making sure that jobs are being handed out,” Holmes said. “This is about equity in terms of gender, race, age, everything. This is really going to make a big, big piece for Evanston, I think, in terms of showing what kind of community we really are.”

Correction: A previous version of this story misattributed a quote to Ald. Brian Miller (9th). The first quote in the article was from Ald. Donald Wilson (4th). A photo caption in the previous story also misattributed Wilson’s comments. The Daily regrets the error.