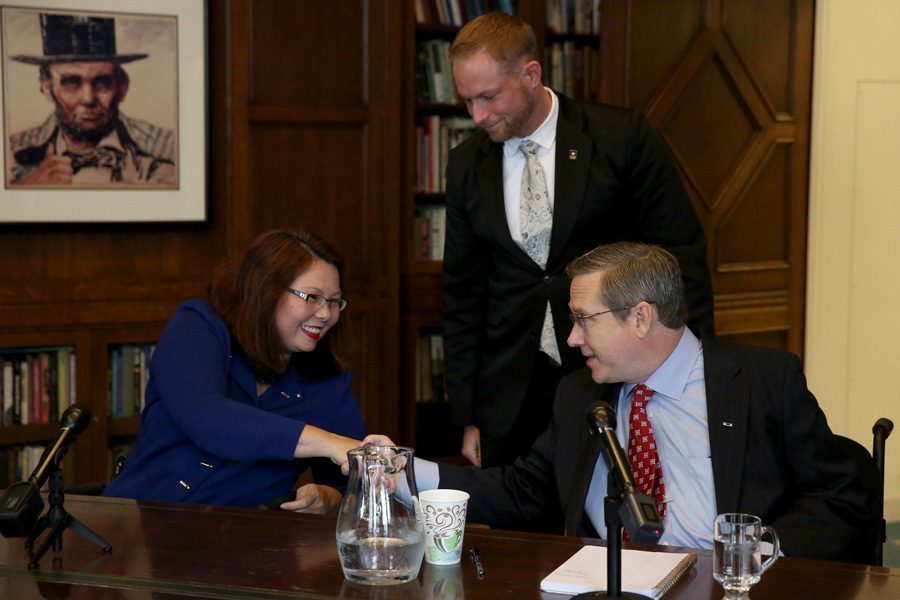 U.S. Sen. Mark Kirk (R-Ill.) defended himself again Friday night for comments he made at a debate the week before.

“I am absolutely not a racist,” he said at Friday’s debate with his opponent U.S. Rep. Tammy Duckworth (D-Ill.), after being asked about the comments about her family heritage he made at their first televised debate.

At the candidates’ first televised debate, Duckworth referenced her family’s military history. The army veteran said she has ancestors on her father’s side who fought in the Revolutionary War.

“I forgot your parents came all the way from Thailand to serve George Washington,” Kirk said during that debate.

The junior senator received criticism for the remark from Duckworth and Democratic nominee Hillary Clinton, among others. He also lost two key endorsements, including the Human Rights Campaign and Americans for Responsible Solutions, the gun control political action committee founded by former Rep. Gabby Giffords (D-Ariz.), who was shot in the head during an assassination attempt in 2011.

Kirk said at Friday night’s debate he “wasn’t thinking” when he made the remarks, and used the first part of his opening remarks to apologize to Duckworth.

In accepting his apology, Duckworth criticized Kirk for the remark.

“That is not acceptable language coming from a United States senator,” Duckworth said.

At the final debate, hosted by ABC7 Chicago, Univision Chicago and the League of Women Voters of Illinois, the two candidates also clashed over gun control methods and Republican nominee Donald Trump. Moderator Charles Thomas asked the candidates how they would work with Trump if he were elected.

Kirk, who has not endorsed Trump and asked he step down, said he would not work with the business mogul.

“Given his personality, I would probably have a lousy relationship with him,” he said. “He does not have the temperament to be a good commander in chief.”

For her part, Duckworth said she would try to work with Trump if he were elected and that many Americans were “sick and tired” of Congress opposing the president based on party lines.

The current gridlock in Congress is a sign that a policy of opposing a president “doesn’t work,” she said.

“I will work with Donald Trump when his policies are for the good of the country,” she said. “I will hold him accountable for making good decisions, and when they’re bad decisions I will oppose him.”

Duckworth said she already has experience acting against a president’s beliefs. As a representative, Duckworth did not support Obama’s plan to provide Syrian rebels with weapons.

Duckworth, who supports the use of drones in the Middle East, said she wants to be in the Senate when decisions about U.S. military involvement are made.

“You don’t always know the cost … (and) too often we’ve hidden the cost from the American people,” she said. “We need to do right by our military men and women.”

Kirk said he also supports the use of drones, saying, “We don’t need boots on the ground. We need boots over ground.”

Kirk said he is wary of letting in refugees, while Duckworth said she supported opening the country to “fully-vetted” refugees.

On gun control, Duckworth also said during the debate that the country should institute universal background checks and ban armor-piercing bullets. She also criticized Kirk for not participating in the congressional sit-in addressing gun control legislation.

Kirk is both pro-gun control and supports abortion rights. He said the country should better regulate gun shops linked to a high volume of gun violence.

“The way to handle this problem is … to ban gun trafficking to criminal organizations,” he said.

The two candidates were also allowed to ask each other questions in part of the debate. Kirk asked Duckworth whether she would agree to meet him the day after the election at the Billy Goat Tavern for a beer “to show Illinois families that we can bury the hatchet.”

“I’m allergic to alcohol, so if you let me have a Diet Coke I would certainly be willing to meet with you there,” she said.