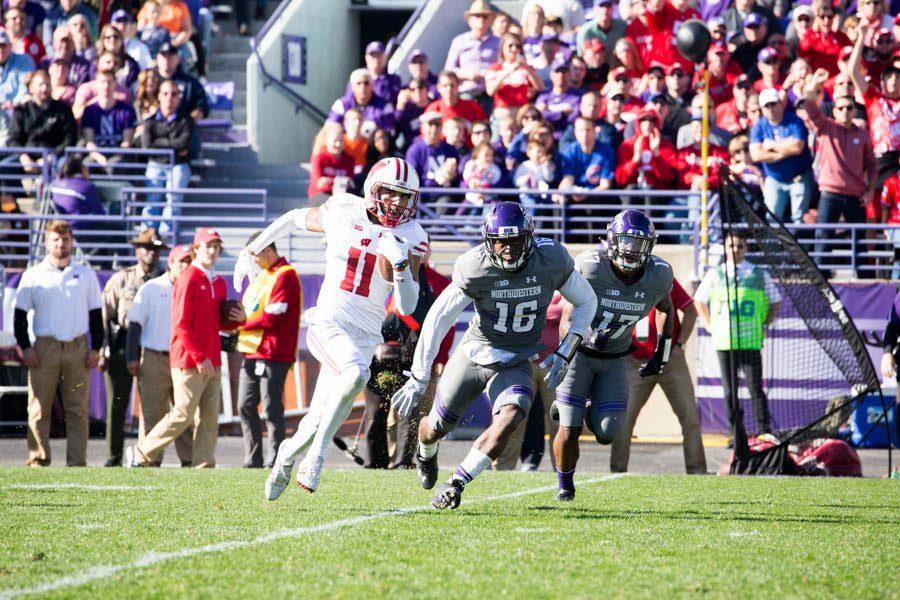 Northwestern has had a high-flying offense over the past month, moving the ball through the air and on the ground against solid Big Ten defenses.

“Wisconsin may be the most complete team we saw on tape in all three phases. They don’t typically beat themselves,” coach Pat Fitzgerald said. “They forced us to be one-dimensional today, and we just weren’t able to get it done.”

Outside of a successful two-minute drill drive at the end of the first half, which Thorson capped by finding senior receiver Austin Carr in the end zone for the Cats’ only points of the day, NU’s offense showed little ability to sustain drives. The Cats’ best scoring chance of the second half came with the team in the red zone down 13-7 at the start of the fourth quarter, but Thorson fumbled on a third-down sack to end the drive.

The Badgers turned NU’s only turnover of the game into a touchdown and two-point conversion on the ensuing possession to go up by 14 with 8:57 left in the game, effectively sealing the win given the Cats’ offensive struggles.

“They didn’t throw anything extra-special at us,” Carr said. “They’re a good defense…up front, in the back, there’s a reason why they’re a top-ranked team.”

With little offensive support, NU’s defense had slim margin for error against the run-heavy Wisconsin attack. The Badgers held the ball for more than 40 minutes and racked up 190 yards on the ground, pounding away at the Cats with methodical drives to complement their suffocating defense.

NU surrendered few big plays on the day, but was burned by a 46-yard end-around touchdown run by Wisconsin receiver Jazz Peavy that gave the Badgers a 10-0 lead in the second quarter. The Cats also failed to make big plays of their own to disrupt Wisconsin’s offense, finishing without a sack or a turnover.

“We should’ve been able to make more plays. It was crucial for us to be able to do so,” junior safety Kyle Queiro said. “Turnovers are one of the leading factors of victories, and we aren’t doing all that great at it right now.”

Without explosive defensive plays, NU’s scuffling offense was forced to deal with bad field position for most of the game. Badgers punter Anthony Lotti put six of his seven punts inside the 20, tilting the field in Wisconsin’s favor and forcing the Cats’ offense to score on long fields.

That challenge was too much for NU, which was forced to abandon the run early in the game and lean on Thorson. Though the passer has been a bright spot in recent weeks and connected with Carr to the tune of 12 catches and 132 yards, he missed several throws and couldn’t make enough plays to lift the Cats to an upset victory.

Despite Thorson’s inconsistency and a sharp performance by the Badgers, NU trailed by just one score into the fourth quarter against the top-10 team. With the Cats needing two wins in their last three games to reach bowl eligibility, junior linebacker Anthony Walker said the team feels it is close to a breakthrough.

“13-7, No. 8 team in the nation, going into the fourth quarter with all the momentum…who wouldn’t want that?” he said. “We just have to get it done.”