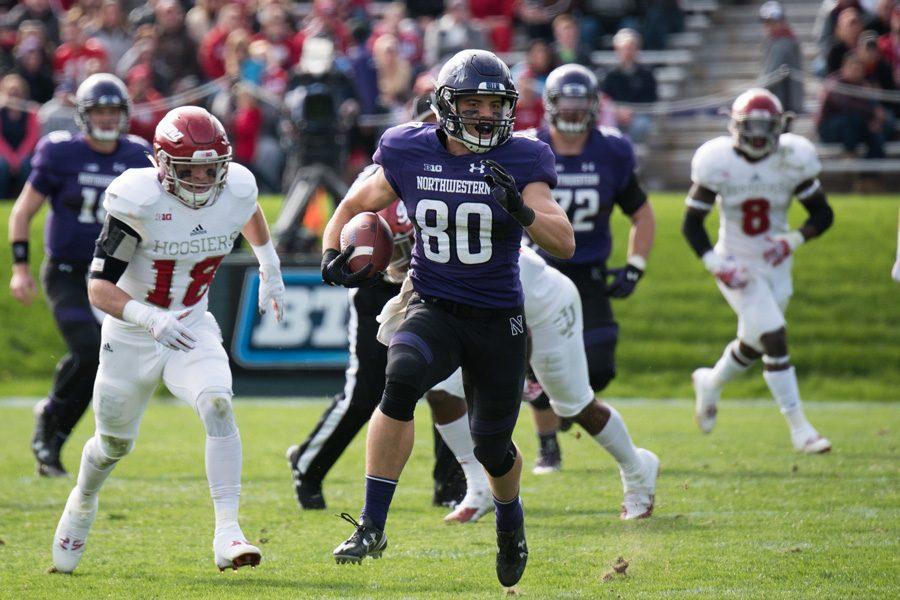 As they watched the Badgers clash with Northwestern in Madison last November, Wisconsin fans threw snowball after snowball onto the field. They fired off chunks of snow at refs, cheerleaders and each other. But down on the field, Wildcats quarterback Clayton Thorson barely threw the football at all.

“I think we handed the ball off 50 times or something like that,” the now-sophomore quarterback remembered, only slightly overstating the number.

The approach worked. NU emerged with a 13-7 victory in the Top-25 battle, escaping with a victory on a day that Thorson completed just nine passes.

When the two teams meet back up this Saturday, the No. 8 Badgers will be greeted by a completely different NU offense. The Cats now boast one of the league’s most explosive passing attacks, and it is spearheaded by Thorson’s favorite target, senior Austin Carr.

Thorson and Carr have forged a close relationship and awoke an offense that was in a deep slumber as recently as September, when the team managed just 7 points against FCS opponent Illinois State. Coming into Saturday, NU has thrown for at least 250 yards in three straight games.

The friendship between the signal caller and receiver, which both compared to a “mentorship,” actually started before Thorson even arrived as a freshman.

Carr said he first met Thorson when the quarterback visited NU the spring of his senior year in high school, and the two initially got to know each other through Athletes in Action, a Christian ministry on campus.

“When (Thorson) ultimately ended up coming (to NU) and — being in the locker room with him and everything — it was just kind of a natural friendship,” Carr said. “He and I would meet weekly and just kind of talk about life.”

The relationship blossomed. Thorson, who said building chemistry with all his receivers off the field is key to success on gameday, noted the time the two put in during the offseason has paid dividends in building on their rapport.

“We’re just on the same page all the time. We talk through a lot of things, and I can get on him about something, he can get on me,” Thorson said. “We’ve got that good relationship. We can go both ways.”

Carr, a former walk-on, entered the season with just 23 career receptions. Nine weeks later, he has more than tripled his career catch total and leads the Big Ten in total receptions, touchdown catches and receiving yards for the season. He is the conference’s top wide receiver by just about any metric, and the competition isn’t all that close.

In the words of Thorson, who doesn’t hesitate to annoint the senior the best receiver in the league, Carr has “a lot of evidence” to back up such a claim.

Carr said he tries to block out the noise around his sensational season, but admits he too is in awe of the numbers he’s putting up.

“There’s a ton of talent across this league,” Carr said. “Sometimes I’m just amazed that I’m first, because I’ve been watching other guys … those guys are top-echelon athletes.”

“He’s really just taking the season by storm. He put in all that extra work in the offseason, and it’s actually paying off,” Walker said. “To see him go from a walk-on to the best wide receiver in the Big Ten is just crazy.”

Carr’s senior year explosion has been made possible by the evolution of Thorson, who has been asked to make the jump from a game-manager to a game-changer after starting in 2015 as a redshirt freshman.

As offensive coordinator Mick McCall has opened up his playbook, Thorson has jumped from 11th in the conference in passing attempts a year ago to second this fall. Along the way, he already has thrown 15 touchdown passes, more than any other sophomore quarterback in NU history.

“It’s been a lot of fun,” Thorson said. “Just like high school, just throwing the ball around the place.”

The pass-heavy approach has allowed him to quickly move into 13th in program history in passing yards.

“He has kind of got that ‘it’ factor with timing in his head,” Carr said about the quarterback. “We didn’t so much have that last year, and I think that he was a little more tentative with his throws, less confident and a little more conservative. And, this year, it just feels like he’s letting it loose a lot more.”

Last November, a conservative Thorson and a run-heavy approach produced 60 passing yards for the quarterback and only one catch for Carr when NU took on the Badgers.

This year, the weather forecasts to be in the mid-60s at Ryan Field when the two teams meet. There will be no snowballs to throw.

However, Thorson is likely to throw the pigskin plenty and be looking to get it to his star wide receiver.