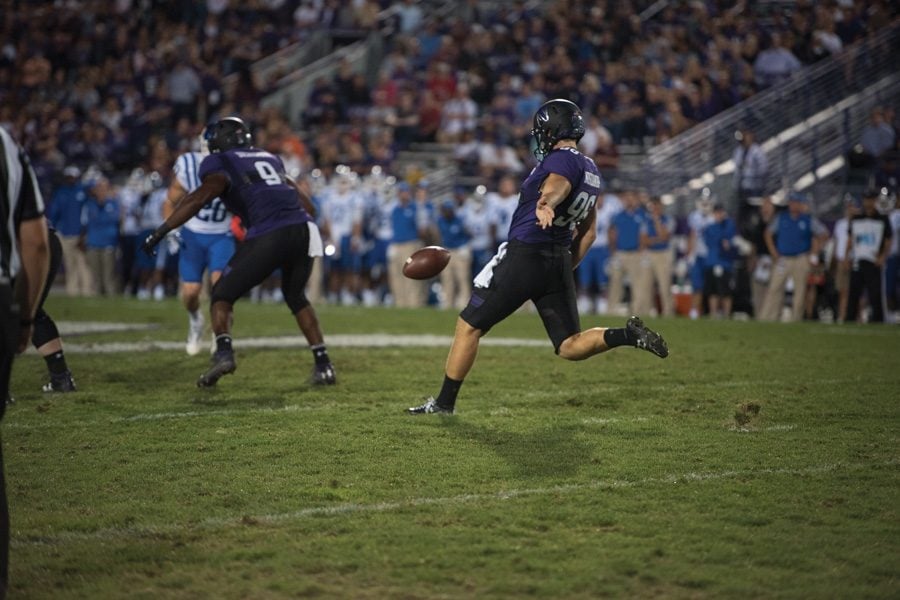 Hunter Niswander punts the ball. The junior punter is second in the Big Ten in average punt yardage and punts per game.

Hunter Niswander trotted onto the Outback Bowl field for his final punt of the 2015 season with a season average of 38.3 yards per punt, second-worst in the Big Ten.

After receiving the snap, his punt traveled a mere 10 yards. Niswander’s season average dropped to 38.0, and he finished in last place.

“Everyone had faith in me,” the now-junior punter said. “I just had to believe in myself.”

Fast-forward 10 months, and Niswander has all the self-confidence in the world.

He ranks second in the Big Ten with a 42.7-yard average and fourth with a 62-yard long. He’s the organizer of a conference-wide tribute to punters Sam Foltz and Mike Sadler, who lost their lives in a July car accident. He’s been dubbed “Heiswander” on social media, alluding playfully to the Heisman Trophy, college football’s most prestigious award.

“It’s just been a matter of focus in the offseason, working on the details, whether it’s mechanics, the steps, the drop,” Niswander said. “There’s a lot that goes into punting that people don’t necessarily see.”

Each morning during the summer, Niswander and Fitzpatrick would lift and run together, then head out to the field to work on snapping and kicking. Niswander also supplemented that daily training with frequent visits with Filipovic, whom he’s worked with since high school.

“With Hunter, I always felt that he had a really good ‘big punt’ … but that his bad kicks could’ve been better,” Filipovic said. “We needed to narrow down that spectrum of worst kick to best kick.”

So, over the course of the offseason, Niswander and Filipovic worked together to adjust essentially every aspect of his punting technique.

“The biggest thing we talked about was trying to be more relaxed with his steps, so he’s more balanced while he’s swinging through the ball,” Filipovic said. “By being more balanced, he would be able to bring more torque and make cleaner contact more often.”

Niswander also flattened and lowered his drop in relation to his foot, shifted his weight farther forward during the kicking motion, took up Pilates to improve his balance and did exercises to strengthen his core muscles.

In addition to his primary goals of improving his distance and hang time — “That’s pretty much it in punting,” he said with a smile — Niswander also focused on becoming more reliable in windy situations — which require an even lower drop — and pinning punts inside the opponent’s 20-yard line.

But the most motivating part of Niswander’s offseason was also the most tragic: a moment that reinforced the relative inconsequence of punting and football in general.

Niswander was helping coach a youth camp in late July when Filipovic pulled him aside and told him that Foltz, Nebraska’s punter, and Sadler, Michigan State’s punter from 2011-2014, had died in a car crash the night before. Niswander, who knew both personally, was stunned by the news.

“Those guys were an inspiration to me,” he said. “Obviously they were great punters, so they were inspirational in that way, but they were also great guys off the field and in the community, so it inspired me going into this year to do the best I can do in everything that I do.”

In August, Niswander orchestrated a movement among other Big Ten punters to write, in memorandum, “RIP SF” and “RIP MS” on their cleats this season. And on the gridiron, Niswander has honored them even more — by emulating their former excellence.

The days of 10-yard shanks and last-place averages seem far behind him.

“Knowing what I’d experienced last year, what that was like,” he said, “I just wanted to be better and help the team out more this year.”