Football: Northwestern braces for yet another close Wisconsin game 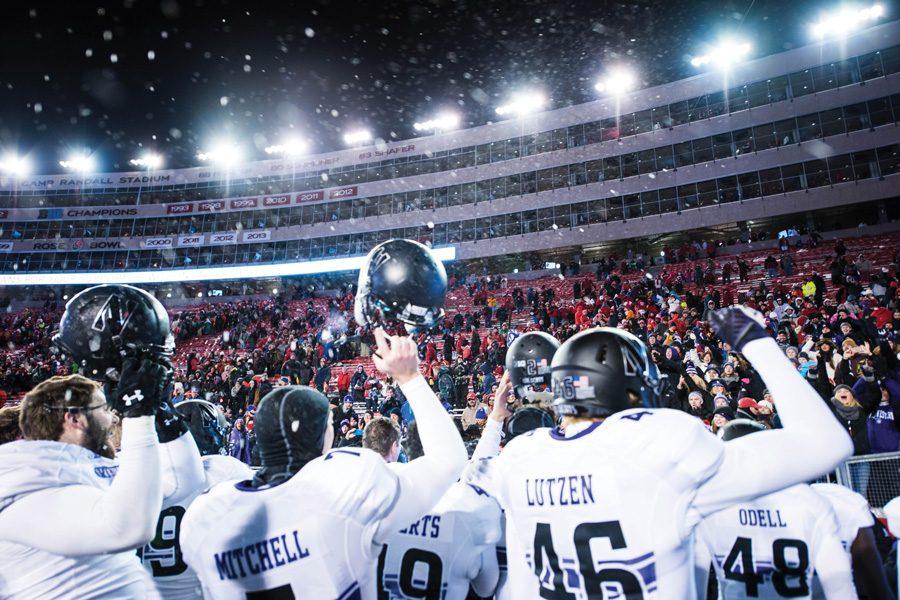 Northwestern celebrates after defeating Wisconsin in 2015. The Badgers have not won at Ryan Field since 1999.

There’s some magic in the air at Ryan Field, at least when Wisconsin comes to town.

The Wildcats haven’t lost to the Badgers at home since 1999, an impressive streak covering four victories. Northwestern (4-4, 3-2 Big Ten) will look to stretch that run to five on Saturday when No. 8 Wisconsin (6-2, 3-2) rolls into Evanston.

“That’s dope,” junior safety Godwin Igwebuike said, referring to the winning streak. “We have to keep that going.”

All four of the Cats’ wins during that streak have been decided by fewer than 10 points, and NU also escaped with a 13-7 victory over Wisconsin last year on the road. This game has the potential to decide the winner of the Big Ten’s West division, and NU is bracing for another down-to-the-wire finish against the team.

And just like the last time the Cats and Badgers played at Ryan Field, Igwebuike should end up being a key player. The then-redshirt freshman came out of nowhere in 2014 to record three interceptions and almost single-handedly pull NU to an upset victory. Igwebuike will again have to shoulder much of the defensive load as the leader of the Cats inexperienced, patchwork secondary, but he seems confident in his ability to replicate the past two years’ results.

“We’re ready for anybody,” Igwebuike said. “I don’t care if you’ve got a third arm. You’re throwing with a third arm, we’re still going to cover you up.”

NU will hope Igwebuike can provide more of the same, but a key difference from the past two games is the offense’s newfound passing success with receiver Austin Carr. The Badgers’ defense held the senior to just one catch in each of the teams’ last two meetings, a stark difference from this year, where Carr has had at least five receptions in every game.

Carr’s ability to stretch the field vertically and rip off big gains could give the Cats more breathing room than they had in last season’s win or in their 20-14 victory in 2014.

But knowing Wisconsin, Carr knows getting and keeping a lead won’t be easy.

“We’ve got to play a four-quarter game. We’ve got to be mistake-free,” Carr said. “They’re going to make some plays too, and they’re a scrappy team. They’re one of the hardest playing teams I think we’re going to play all year.”

Scrappiness proved critical in the last two matchups, whether it was Igwebuike catching Badgers running back Melvin Gordon from behind to stop a long touchdown in 2014, or then-redshirt freshman linebacker Nate Hall making a tackle at the one-yard line to prevent the go-ahead touchdown in 2015.

But the Wisconsin defense may have the edge this year. Coach Pat Fitzgerald highlighted the unit’s eight returning starters, led by linebacker TJ Watt. The brother of NFL sack machine JJ Watt, TJ Watt is cut from the same cloth and leads the Badgers with seven sacks and 9.5 tackles for loss.

“(Sophomore quarterback Clayton Thorson) is going to play one of the best defenses, if not the best defense, in the conference and in the country this weekend,” Fitzgerald said. “Those guys are relentless. They’re fun to watch.”

With a trip to the Big Ten championship possibly on the line, the game is sure to be fiercely contested. And just like it has been year after year, that also means it should be close.