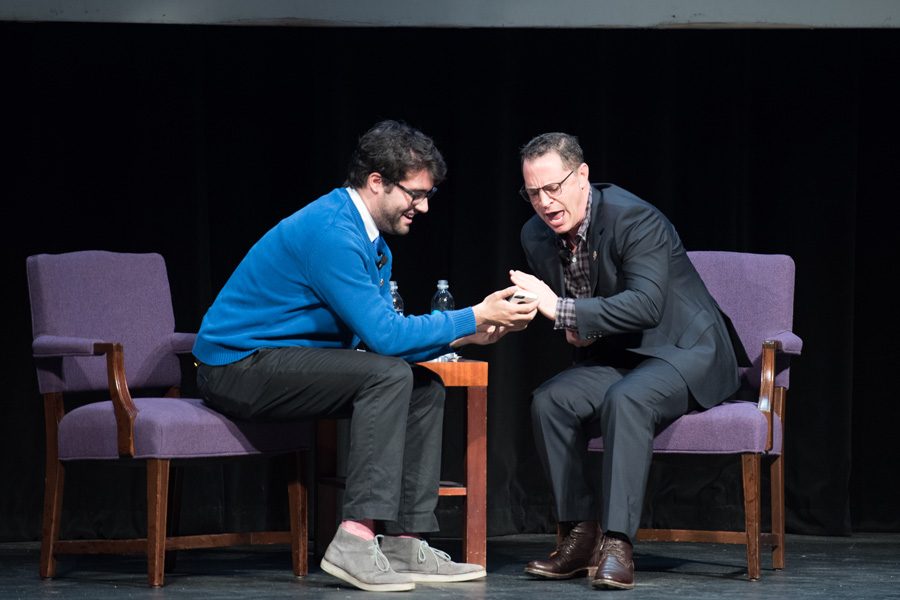 “Hello, non-baseball fans” were the first words out of actor Joshua Malina’s mouth as he addressed more than 100 people who chose to see him instead of watching the Chicago Cubs win Game 6 of the World Series.

Unlike recent Hillel celebrity speakers, such as actor James Franco and stars of Comedy Central’s “Broad City,” Malina is not a comedian by trade. However, the “Scandal” and “West Wing” star had the audience in stitches as he talked about his career as a Jewish actor and the upcoming election at Cahn Auditorium on Tuesday night.

The bespectacled actor entertained the audience with humorous stories about his humble beginnings, explaining how he landed his first major role in Emmy-award winning screenwriter Aaron Sorkin’s Broadway play “A Few Good Men.”

Malina recalled moving back to New York City after graduating from Yale University and being prompted by his mother to call Sorkin because they were acquaintances and both Jewish.

“I was like ‘Mom, that’s how I’m going to become an actor? I’m just going to cold-call Jews?’” Malina said. “But then I really couldn’t think of anything else to do, so I did call him.”

The call paid off, as Malina went on to star in Sorkin’s other shows, such as ABC’s “Sports Night” and the NBC political drama “The West Wing.” He is currently playing David Rosen on “Scandal,” ABC’s political drama, which is set to debut its sixth season in 2017.

The actor’s experience with politics on screen and in reality made him an appealing choice as this year’s speaker, said Communication senior Harry Wood, who moderated the event.

Last month, Malina reunited with other cast members of “The West Wing” in Ohio, where they campaigned for Hillary Clinton and urged people to register to vote.

However, when asked what he thought a celebrity’s role is during the election season, Malina said he prefers non-partisan “get out and vote” messages.

The serious discussion about politics was balanced by Malina’s comical stories about playing pranks on sets and getting pranked himself. While playing Will Bailey on “The West Wing,” Malina said he stole personal stationery from Bradley Whitford, who played Josh Lyman. He and cast member Janel Moloney pranked Jimmy Smits, who joined the show just before Valentine’s Day, Malina said. The two sent Smits a “huge” bouquet of red roses from Whitford along with a “lightly homoerotic” note written by Malina on Whitford’s stationery.

“Apparently it was incredibly awkward,” Malina said. “Brad told me all about it the next day because he immediately knew that I’d done it to him. He told me that Jimmy Smits came over to him and wanted to make it very clear that he had a girlfriend.”

The actor showcased his talent when he and Wood acted out “Scandal” fanfiction dialogue, which had Malina’s character involved in a romantic relationship with Olivia Pope, played by Kerry Washington.

Medill freshman Claire Bugos, who is a fan of “The West Wing,” said the event was one to remember.

“It was one of the most entertaining, funniest hours of my life,” she said.

The best part, Bugos said, was hearing about the pranks, because it provided a chance for fans to experience what it is like behind the scenes of their favorite shows.

Malina told The Daily he was “pleased” people came to the event and seemed to enjoy it.

“The fact that anybody, especially on a night when there’s a World Series game involving the Chicago Cubs … showed up, touches me,” he said.