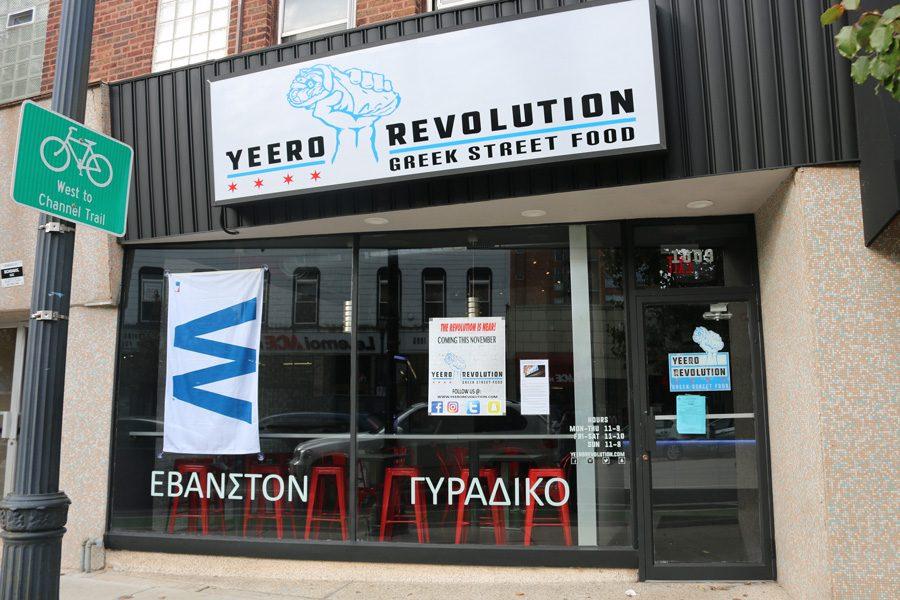 Yeero Revolution “flies the W” outside their restaurant, 1009 Davis St., on Tuesday. The fast-casual Greek restaurant is set to open next week.

The owners of Yeero Revolution said they are ready to show Evanston residents and Northwestern students what a Greek gyro really tastes like.

The new restaurant will open next week at 1009 Davis St. under the ownership of three Greek immigrants who expressed excitement about setting up shop in the North Shore. Co-owner John Nikolaou said he appreciates the opportunity to bring a “true” gyro to Evanston. He said people who’ve been to Greece will be able to differentiate their food from that of other Greek restaurants.

“We are offering a gyro that actually is not in Chicagoland at all,” Nikolaou said. “Our gyro is traditional, in the way that this is what they serve in Greece. The gyro that you see everywhere else here, they don’t have that in Greece. That’s an American thing.”

Before deciding to set up shop in Evanston, Nikolaou said he and the other owners were looking to start in Chicago, until they realized a more intimate, connected downtown feeling was what they were looking for.

Co-owner Nick Stolidakis said the Yeero Revolution concept took some time to develop, but the planning period helped them realize the significant demand for Greek cuisine from Evanston residents.

“We’ve been planning on this for a while. It’s not just something we just said, ‘Let’s do it right now and call it a day,’” Stolidakis said. “We already knew what was missing from the market, so that’s why we’re going with something different (that’s) not your traditional fast-food style Greek food that’s been here for the last 30 or 40 years.”

The restaurant’s third co-owner Louie Theodorakakis said his decision to leave the door open in the days before Yeero Revolution’s official opening has helped the co-owners form relationships with Evanston residents. Several have already asked for recommendations on which gyros to get.

The restaurant’s interior doesn’t give many hints toward its cuisine, but Nikolaou said the modern aesthetic was intentional, as he wanted to replicate the feeling of eating in a typical restaurant in Greece. Theodorakakis said after acquiring the space in July, he immediately wanted to renovate the restaurant, choosing to stray from the stereotypical decorations found in Greek restaurants.

The restaurant will be located in space previously occupied by Asian Express, which closed in July.

“We wanted to be the new trend, not copy a trend,” Theodorakakis said. “You wouldn’t think you’re walking into a Greek restaurant because you don’t see columns, you don’t see blue everywhere, you don’t see pictures of islands or mountaintops.”

Nikolaou said he came up with the idea over a year and a half ago with his partners. The chance to introduce customers to what they call a “true” gyro was too good to pass up, he said.

“It’s something new, something exciting, and you will literally be eating the food from Greece,” Nikolaou said.