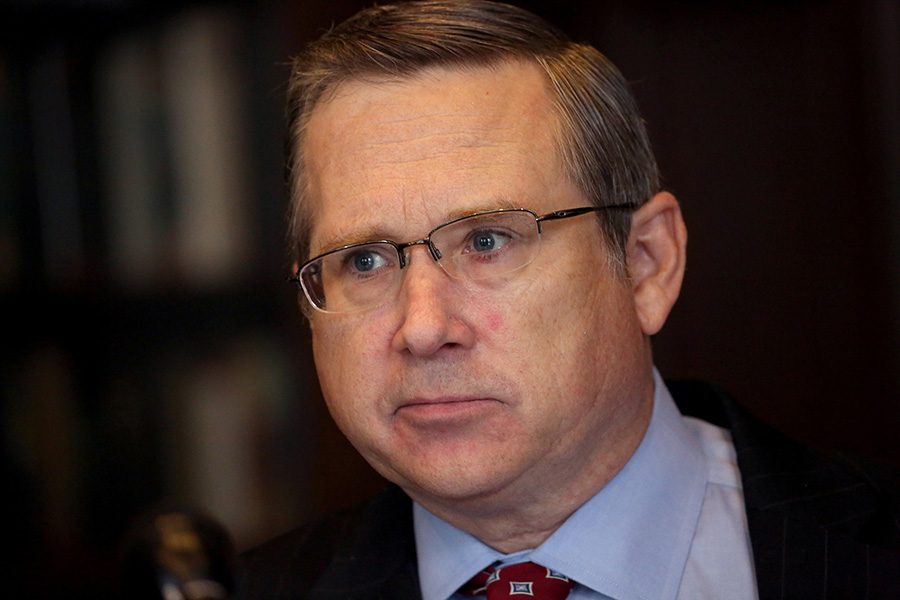 Sen. Mark Kirk (R-Ill) answers questions from the Chicago Tribune editorial board during an appearance in October. After making racially charged comments about his opponent Rep. Tammy Duckworth (D-Ill), Kirk has lost endorsements from the Human Rights Campaign and Americans for Responsible Solutions.

Political action committee Americans for Responsible Solutions revoked its endorsement of Sen. Mark Kirk (R-Ill.) on Saturday, after he made a jab at Rep. Tammy Duckworth (D-Ill.) heritage during Thursday’s debate.

“I’d forgotten that your parents came all the way from Thailand to serve George Washington,” Kirk told Duckworth during the Oct. 27 debate after Duckworth said her family’s military history dated back to the American Revolution.

Duckworth, who lost both her legs while serving as a helicopter pilot for the U.S. Army in Iraq, was born in Bangkok, Thailand, to a Thai mother and American father.

ARS, a PAC that focuses on reducing gun violence, originally endorsed Kirk because of his support for gun policy reform. ARS was formed by former Sen. Gabrielle Giffords (D-Ariz.), who was shot in the head during a 2011 assassination attempt. Giffords formed the PAC in 2013 in response to the Sandy Hook Elementary School shooting.

The group said Kirk had been an advocate for “bipartisan, responsible change” on gun control in the Senate. But following his comments Thursday, ARS said Kirk was “not worthy” of their endorsement.

“Senator Kirk’s racist attack on Congresswoman Duckworth is unacceptable and represents a low point, even in this election season,” ARS PAC executive director Peter Ambler said in a statement released Saturday. “While we believe the path to responsible change and communities safer from gun violence must include Republican champions, we cannot continue to support Senator Kirk.”

ARS is the second group, following the Human Rights Campaign, to revoke its endorsement of the incumbent senator.