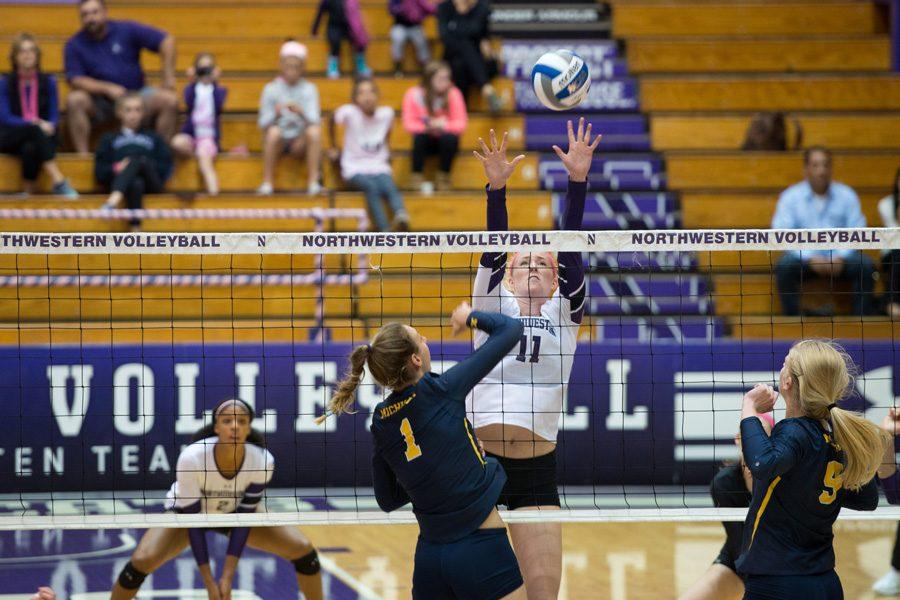 Maddie Slater rises for a block. The senior middle blocker notched her 300th career block on Friday against Iowa.

Northwestern might have suffered another 0-2 weekend, but there were some bright spots.

“When we couldn’t pass the ball well we didn’t have as many offensive options as we needed,” she said. “I think that’s what really put us a little further behind.”

NU never established itself at the net in the match. The Cats didn’t have a single hitter with double-digit kills Saturday, and only managed six blocks as a team. Nebraska hit an outstanding .308, while NU hit just .124.

“Nebraska’s a really solid team, and they were really strong behind the service line,” Slater said. “This week we need to work on challenging our passers so they can be able to pass those high-caliber balls.”

The Hawkeyes edged NU on Friday under questionable circumstances. The Cats had two points overturned on video review in the fourth and final set, including an overturned kill by junior outside hitter Symone Abbott that would have given NU the set win.

Unlike Saturday’s match, the Cats’ play at the net helped the team stay competitive with Iowa, as they had 14 blocks in the match. Junior setter Taylor Tashima and junior middle blocker Gabrielle Hazen led the way with seven, while Slater chipped in six. NU also had three hitters with double-digit kills, led by Abbott’s 12.

Despite failing to find a victory, the Cats continued to build on their upset win over Purdue last weekend. On Friday, they won a set for only the second time since Sept. 21 at Indiana.

Davis said he likes the way his team is competing.

“We just keep trying to get better each day,” he said. “The team’s doing great coming in and working hard.”

Johnson said despite a 1-11 start to the Big Ten slate, NU is still optimistic.

“We know we’re a good team,” Johnson said. “We know we can continue to fight. We were playing the number one team in the country, and we didn’t get completely wiped out of the water. We just need to put all the pieces together.”