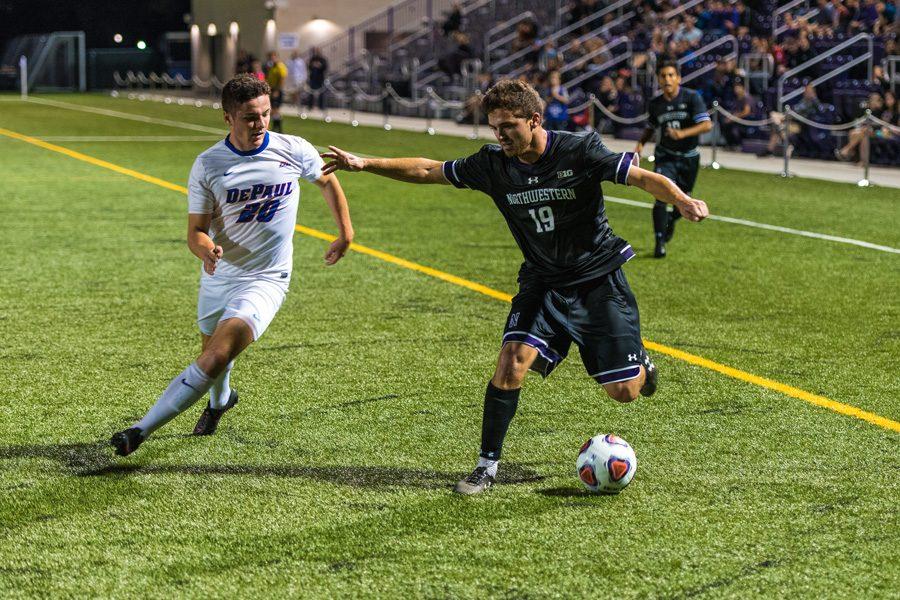 Jeffrey Hopson takes on a defender down the sideline. The senior midfielder netted the Wildcats’ only goal of the game to help give the team a 1-0 win over Penn State in its final regular-season game.

The 2016 season hasn’t gone the way Northwestern’s seniors wanted, but the departing players emerged with a silver lining Sunday, as the group helped lead the Cats to a surprise win.

In what could very well be their final game at home this season, Wildcats (5-10-1) coach Tim Lenahan started all of his seniors for Senior Day, and NU upended Penn State (8-7-2) 1-0 at Martin Stadium.

The Nittany Lions, who were playing for home-field advantage in the Big Ten Tournament, started the game strong offensively, controlling the ball through their backline and creating scoring chances by pushing the ball up the flanks.

In the sixth minute, midfielder Connor Maloney, Penn State’s leading goal scorer, found himself with only junior goalkeeper Francisco Tomasino to beat. Tomasino, however, denied Maloney a goal with an impressive kick save.

“(Tomasino) made a really good save against their best player to keep us in the game,” coach Tim Lenahan said.

NU’s defense, however, wasn’t fazed by the Nittany Lions’ potent attack, as the Cats defended Penn State’s corners and services well. The Nittany Lions ripped six shots in the first half, but only two were on goal due to NU’s solid defensive play.

Good defense is a big part of the Cats’ game, as they like to defend and then counter. Although the team has struggled to execute this game plan for most of the season, Sunday was different.

In the 24th minute, junior midfielder Riley Kelliher crossed the ball from the right corner to senior midfielder Jeffrey Hopson who headed it home to give NU the lead.

“We started off a little slow,” Hopson said, “but then we were able to find holes in their formation and exploit them on the flanks.”

Down a goal, the Nittany Lions ratcheted up the physicality of the game, as junior forward Elo Ozumba and Penn State defender Robby Sagel both received yellow cards shortly before halftime. The Nittany Lions finished with 11 fouls, while the Cats only committed six.

NU was able to keep pace with the physical style of play as its defense held steadfast through Penn State’s second half offensive onslaught. In the last third of the game, Tomasino made another pair of nice saves, denying forward Aymar Sigue twice. In the second half as a whole, the Nittany Lions outshot the Cats 10-2.

“The guys played great ahead of me, and I was able to make the saves I needed to,” Tomasino said. “There’s a lot more chemistry now (than at the beginning of the season).”

Statistically, Sunday’s game didn’t affect NU’s postseason prospects. The Cats are the seventh seed in the Big Ten Tournament and will face Indiana, who is the second seed, in Bloomington next Sunday.

But for Hopson and the other seniors, Sunday’s win was more than just three points.

“It meant everything to me to be able to get a goal and a win on Senior Day,” Hopson said.