Football: In historically one-sided series, NU starting to keep up with Ohio State 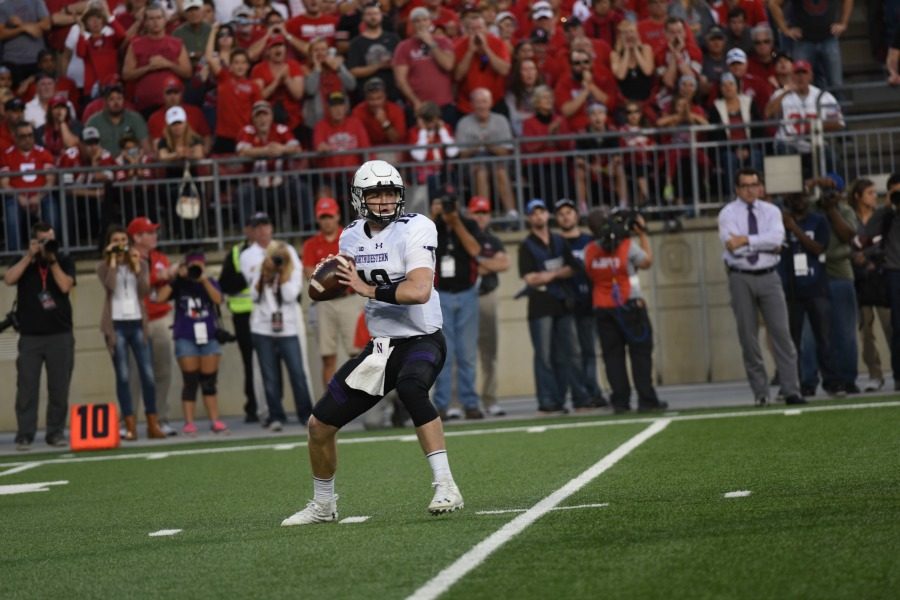 Clayton Thorson passes the ball in front of more than 107,000 fans at Ohio Stadium. The sophomore threw for 256 yards against the heavily favored Buckeyes.

COLUMBUS, Ohio — Northwestern entered Saturday’s game with Ohio State looking to shock the Buckeyes at their place for the first time since 1971. Instead, they ended with a similar result to the last time the two teams battled, a narrow Ohio State win three years ago.

Coach Pat Fitzgerald said the game still had major differences from that primetime showdown in Evanston, despite the similarly close scorelines.

“That was one of the games that kind of started to take our focus in other different directions,” Fitzgerald said of the 2013 showdown, which turned out to be the start of a seven-game losing streak. “We’re in a totally different place than we were at that time.”

Since 1971, the Cats have only topped Ohio State once, and in their 30 losses to the Big Ten rival, have only kept three games within single digits including Saturday.

In 2013, the Cats narrowly missed that mark, losing 40-30 to the then-No. 4 Buckeyes. That game came in front of a packed Ryan Field and with the eyes of a primetime audience watching.

“That might be the most electric I’ve seen Ryan Field in my career,” said Fitzgerald, who played at NU before coaching the team over the past decade.

The close loss that night appeared to cement then-No. 16 NU’s place as a serious contender in the conference. Then came the losing streak, and any indication that the program was ready to burst through quickly dissipated.

After this loss, the Cats were reluctant to chalk the performance up as anything more than a missed opportunity.

“(Ohio State) has always been that top-tier program, and, if we want to get up there, we have to win these games,” junior linebacker Anthony Walker said. “We can’t accept any moral victories.”

Nonetheless, the consecutive narrow losses to the Buckeyes show that NU is getting closer as a program to a top-tier level. Before 2013, it had lost its four games against Ohio State by at least 35.

Junior safety Godwin Igwebuike said Saturday’s performance in particular showed more about the Cats than just how far they’ve come over the past few decades.

“It says something about the perseverance, the family on this team,” Igwebuike said. “These are games that you want to come away with. But let it be known that if you play us, you’re going to have to battle.”

This competitive loss will carry more meaning than the one three years ago if the Cats can back it up with a strong showing against No. 11 Wisconsin next Saturday.

“It’s on to Wisconsin,” sophomore quarterback Clayton Thorson said. “If you look in your rearview mirror in the Big Ten, you’re going to get your butt kicked.”