Football: Northwestern takes No. 6 Ohio State down to the wire, comes up just short 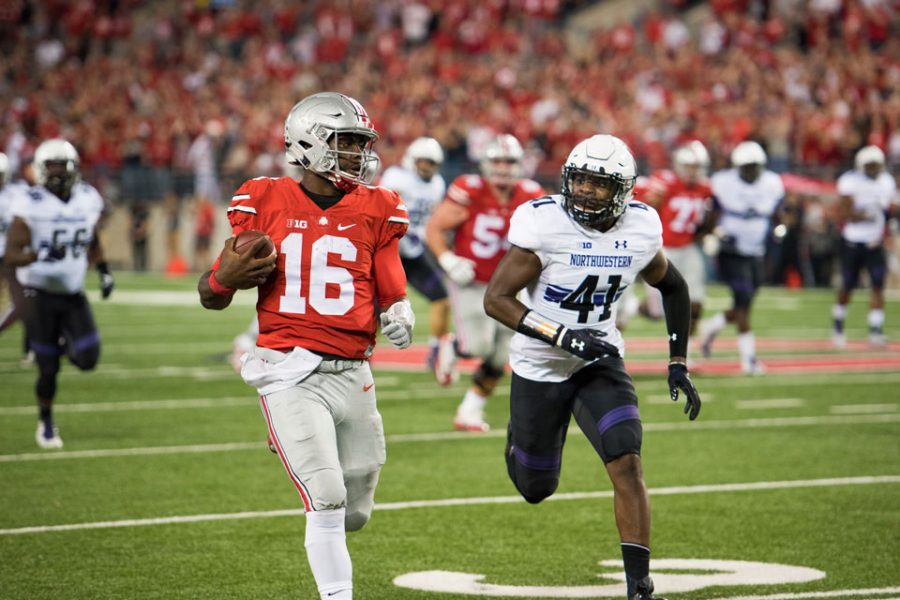 Sophomore safety Jared McGee chases after Ohio State quarterback J.T. Barrett. The Cats held Barrett to 223 passing yards and the Buckeyes to 24 points, but could not pull out the win.

COLUMBUS, Ohio — With a chance to put an exclamation point on a marked turnaround from early-season struggles, Northwestern fell just short Saturday.

The Wildcats (4-4, 3-2 Big Ten) couldn’t quite get the job done against the No. 6 Buckeyes (7-1, 4-1) in a 24-20 loss, falling to .500 with four games left in the season. Saturday’s contest seemed winnable for the Cats all afternoon, and they pulled even late in the third quarter, but Ohio State retook the lead with a late touchdown and held on for the victory.

“It didn’t start the way we wanted it to, spotting them a couple scores, but the guys didn’t flinch and kept swinging,” coach Pat Fitzgerald said. “We ended up one punch short … we went toe-to-toe but just couldn’t find a way to get it done in the end.”

With under four minutes remaining in the fourth quarter and a seven-point deficit facing the Cats, Fitzgerald elected to kick a field goal on 4th-and-goal from the 15-yard line rather than leave the offense on the field. Fitzgerald’s decision was a break from an otherwise aggressive game plan which saw NU convert on both of its fourth-down attempts earlier in the game.

Ultimately, the choice to kick proved the Cats’ undoing, as Ohio State quarterback J.T. Barrett iced the game after breaking free for a 35-yard run on a 3rd-and-10 with 1:57 left on the clock.

“There’s an added pressure on third downs to get off the field, that’s what changes the game,” junior safety Godwin Igwebuike said. “We didn’t do a great job on third down today, and all we can do now is just go back to the film and see where we went wrong.”

Fitzgerald added he likely would have gone for the touchdown on fourth down had the Cats not just been pushed back with a holding penalty on the previous play.

Coming into Saturday, NU had a potential path to a Big Ten West title and spot in the conference championship game. Saturday’s defeat, however, was a major setback toward that goal — because No. 7 Nebraska owns the tiebreaker over the Cats after its win at Ryan Field in September, NU will need significant help from other teams to have a chance to play for a Big Ten championship.

One week after Penn State sprung an upset on the Buckeyes, NU had hoped for a similar outcome. Sophomore quarterback Clayton Thorson said Saturday’s loss was a missed opportunity similar to earlier this season when the Cats lost to Western Michigan and Illinois State.

Despite the loss, Thorson played perhaps one of the best games of his career, repeatedly finding senior wide receiver Austin Carr and junior superback Garrett Dickerson for short and medium gains. Carr racked up a career-best 158 receiving yards, becoming the first NU wideout to reach at least 100 yards in three straight games since at least 2000, and Dickerson hauled in a career-high eight receptions.

The Cats’ won’t get too much time to harp on the loss, as No. 11 Wisconsin rolls into Evanston next week. With the end of the season quickly approaching, Fitzgerald said NU doesn’t want to “be remembered for being average,” and still needs to keep improving.

“There’s going to be no easy fix,” Fitzgerald said. “If we keep battling and keep fighting and scratching and clawing, we’ll give ourselves an opportunity to compete.”