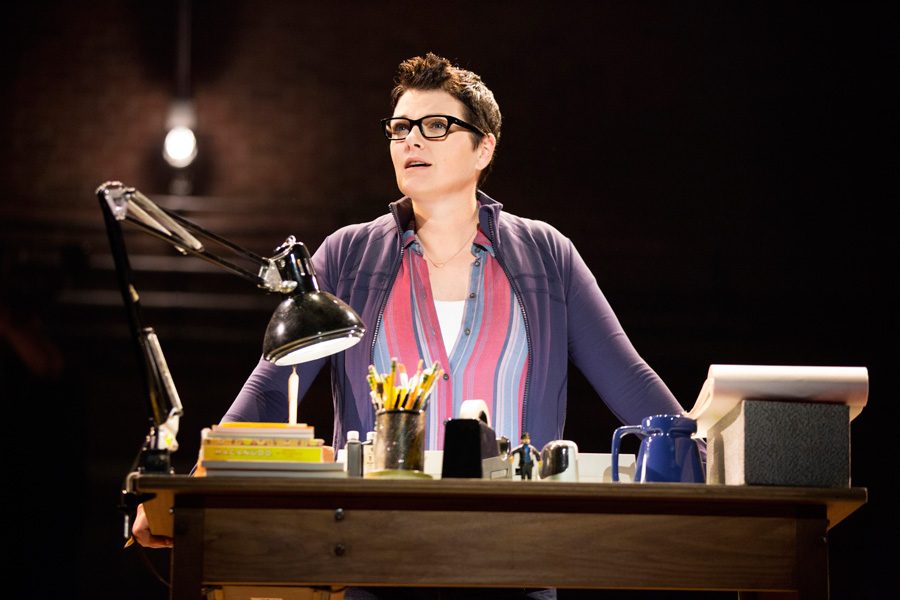 Kate Shindle (Communication ‘99) returns to Chicago with the national tour of the hit musical “Fun Home.” Shindle stars as Alison, the first lesbian protagonist in a Broadway musical.

Stardom was not on Kate Shindle’s agenda while she attended Northwestern.

“Kate was a very interesting student, because she was not always in the in-crowd,” Missimi said. “She worked very diligently and very hard to perfect her craft, but wasn’t necessarily very into the, ‘Let’s sit around and talk theater 24 hours a day’ attitude.”

Hopping from one theater production to another at NU, Shindle’s theater experience in college was later defined by a long series of acting achievements. From getting cast in major roles in multiple Dolphin Shows to starring and later co-chairing Waa-Mu productions, Shindle was never afraid to take risks with her performing style, Missimi said.

Shindle is now traveling across the U.S. with the national tour production of “Fun Home,” the five-time Tony Award-winning musical that opened on Broadway in 2015.

“Fun Home” is a musical based on Alison Bechdel’s graphic novel of the same name, which recounts the author’s life as she comes to terms with being gay, her struggling relationship with her gay father and the various events that defined her childhood. The show is the first musical produced on Broadway that stars a lesbian protagonist, Alison, whom Shindle portrays.

Missimi said it’s very “Kate-like” for her to be involved in a show of such high artistry, dealing with social issues American audience members can identify with.

“Kate went where she thought the work would make her better,” Missimi said. “Even if it was a tour of an unusual little musical about the wives of the president, she’d go out into the regions and work there because she knew that she was learning … She was opening doors for herself, which is a sign of a really serious actress.”

Shindle said she didn’t watch the original musical on Broadway until January, as she was working abroad for most of this past year. But by the time she left Circle in the Square Theatre, where “Fun Home” played, and knowing the tour was getting cast, she told herself she had to do that show.

“It’s not only a great piece of theater, but also one with a strong message of acceptance and respect for yourself, for the people around you, for your family,” Shindle said. “Even when we go through difficult or dysfunctional times, we’re always trying to make it work. Most people are trying to make the best out of their lives, and in this show that’s certainly true.”

Shindle said she was especially impressed by the direction of the memory play, in which her character narrates her life events and never leaves the stage.

Throughout the show, the audience takes a glimpse at Alison in three different stages of her life — during childhood, college and the present day — all of which are portrayed by different actors. Still, Shindle said “Fun Home” allows for viewers to feel sympathetic toward all characters, no matter who provides a focal point.

“I feel like audiences care about the entire family, about each of these characters in different ways, even if they disagree with some of the choices these characters make,” she said. “They find the stories sympathetic and compelling.”

“Fun Home” comes to Chicago on Nov. 2 and will play at the Oriental Theatre until Nov. 13.

In addition to a full-time acting career, Shindle also serves as the president of the Actors’ Equity Association, a national labor union. Touring with “Fun Home” will allow her to visit the union’s liaison cities and discuss the different challenges actors face all over the country, she said.

Most recently, Actors’ Equity has been involved in a Los Angeles-centered dispute over the 99-seat theater plan it drafted, which calls for owners of 100-seat-or-fewer theater venues to pay minimum wage to the actors they employ for rehearsals and performances.

“Across all of our contracts … we believe and fight for the concept that, even though actors love what we do, our work also deserves to be compensated,” Shindle said.

Social advocacy has been a major part of Shindle’s career, dating back to her participation in the 1998 Miss America beauty pageant, Missimi said.

While he coached her for the talent portion of the pageant, for which she sang “Don’t Rain on My Parade” from the musical “Funny Girl,” Missimi said Shindle shared with him a platform on AIDS prevention, which at the time was a particularly controversial topic.

“(Everyone knew) she’s a little not like a typical beauty queen,” he said.

Matt Dudley (Communication ‘99), who co-chaired the 1999 Waa-Mu Show with Shindle and Kate Strohbehn Sinclair (Communication ‘99), said Shindle was always “grounded” and never driven by the desire to make it big. Instead, she approached everything with an optimistic, can-do attitude.

Even when she won the Miss America pageant, Dudley said she maintained her “goofy, loving and hard-working” attitude, which in turn lifted the entire production.

Dudley added he has not found it “surprising at all” Shindle has taken this trajectory with advocacy for social issues, both through Actors’ Equity and the shows she’s involved in.

“Kate is like a quiet mover and a shaker,” he said. “She’s someone who’s not afraid to put herself in a big spot and just knock it out of the park. It’s just who she is.”