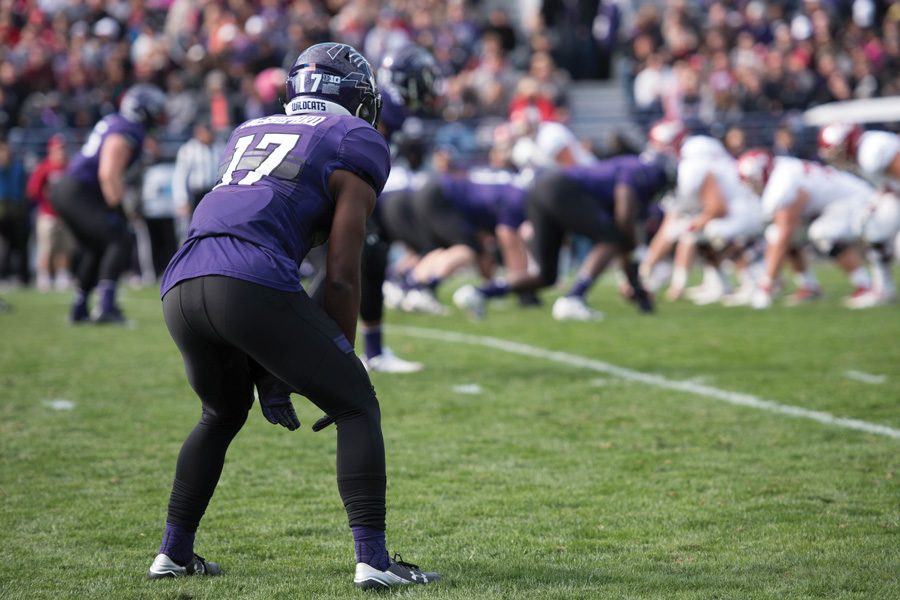 Marcus McShepard lines up at the line of scrimmage. The junior has gone from cornerback, to wide receiver, back to cornerback within the last 10 months.

Last season, Northwestern had one of the most trustworthy cornerback groups in college football.

With two All-Big Ten starters, Nick VanHoose and Matthew Harris, and a third corner, Keith Watkins, who could start on most Big Ten teams, the Wildcats enjoyed a talented and seasoned trio that routinely shut down opponents’ passing games. That foundation helped NU to a top-10 finish in total defense while allowing just five touchdowns through the air — best in the country.

But with VanHoose lost to graduation and Watkins lost to a year-ending knee injury prior to the season, the Cats came into 2016 missing much of last season’s nucleus in the secondary. And although Harris had been out with his own injury since the second week of the season, the senior’s announcement of his retirement Monday ensured last year’s starting cornerback corps will not have a role to play for the remainder of this season.

Instead, the Cats have been reliant on youth on the outside — and have had to live with the ups and downs that have followed.

“We don’t have anyone else, so we don’t have a choice,” coach Pat Fitzgerald said of the young players on his squad, like the ones forced into action at corner. “Your tactics, the way you do things, sometimes have to change.”

The one constant presence on the field has been sophomore Montre Hartage. Once expected to be the team’s first corner off the bench, Hartage has instead started every game this season.

He has made some timely plays — an endzone interception against Illinois State, a no-look pick downfield in last week’s win over Indiana — but admitted he’s just settling in after being thrust into a key role.

“It was kind of shaky at first,” he said. “I’ve calmed down now, playing relaxed and playing for fun.”

The spot across from Hartage has been a revolving door, thanks to injuries. With Harris out, redshirt freshman Trae Williams stepped in and has started four games. When Williams missed the game against the Hoosiers, fellow redshirt freshman Alonzo Mayo started in his place.

After Mayo went down with an injury of his own in the second quarter of that game, junior Marcus McShepard, who had switched from cornerback to receiver in the offseason before switching back mid-season to bolster the secondary’s depth, was pressed into action. McShepard played in every game in 2015 in a reserve role and was solid in helping hold Indiana quarterback Richard Lagow to just 5.4 yards per pass attempt.

“I knew the playbook. I knew the different coverages. So I was more than willing to move back,” McShepard said. “I just wanted to get a chance to get on the field as much as possible.”

Williams has been ruled out for Saturday’s matchup at No. 6 Ohio State, and Mayo is not listed on the two-deep depth chart for the game, leaving Hartage and McShepard to take on the Buckeyes’ aerial attack. Though Ohio State’s passing game is far from the scariest part of its offense — the team has rushed for more yards than it has gained through the air this season — the Buckeyes have a talented quarterback in J.T. Barrett and athletes for him to throw to.

Meanwhile, NU has proven vulnerable in the secondary at times and is giving up 282 passing yards per game. With Harris now out permanently, and other injuries still nagging them, the Cats will need to count on their remaining pieces to get the job done.

Hartage said staying focused through the constant shuffling this season has been hard, but the expectations of the corners remain the same.

“Everyone in the (defensive back) room has the same expectation: to go out and win their battle,” he said. “Whenever a guy steps out there, he’s just got to be ready to go.”