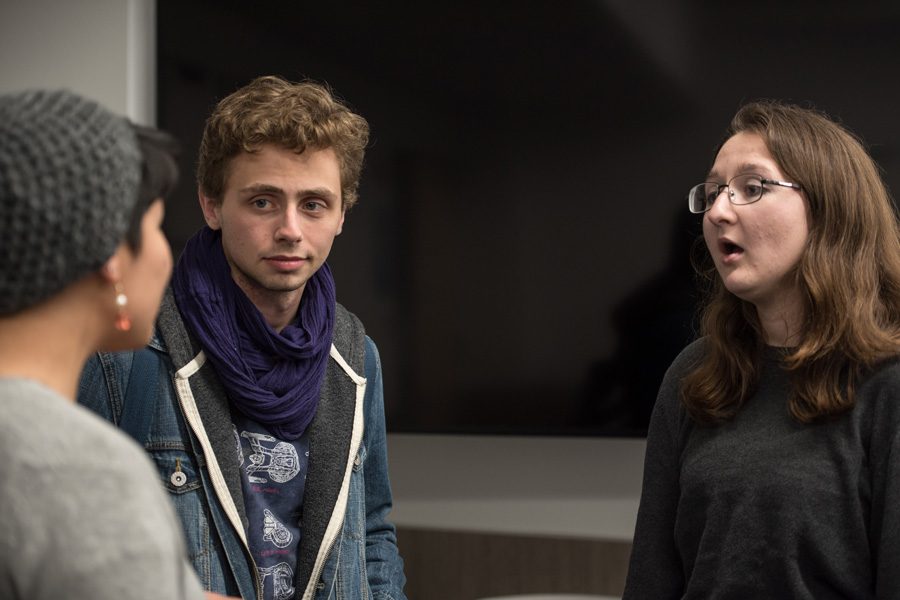 Members and allies of Northwestern’s queer community gathered in Kresge Hall on Tuesday to discuss their experiences involving queerness both on and off campus.

The moderated dialogue was co-hosted by Rainbow Alliance and WAVE Productions and was an introduction to WAVE’s upcoming production “R&J.” The production is an adaptation of Shakespeare’s “Romeo and Juliet” with both leading characters as women. About 80 percent of the script is based on the original text, and the remainder of the show features slam poetry.

The themes discussed during the dialogue included queerness, inclusivity and safe spaces. Roughly 50 people attended the dialogue, which served as a part of the student theater company’s greater outreach to the queer community on campus, said Pauline Moll, a Communication junior and the community outreach coordinator of WAVE.

“A lot of people showed up, which demonstrates the need for this event and safe spaces,” Moll said. “The goal of our outreach is to have…a safe space for dialogue.”

As the discussion began, coordinators passed out 12 printed guidelines for the dialogue. Among them were ideas such as assuming best intentions and challenging ideas rather than people. Students snapped throughout the discussion to convey agreement and support.

Other topics discussed included physical presentation of queerness, the fashion industry’s use and possible exploitation of androgynous clothing, race and sexuality, as well as the fetishization and tokenization of the queer community.

A number of other buildings on campus such as Norris University Center, Harris Hall, University Hall and Technological Institute also provide gender-neutral bathrooms.

While commending the bathrooms as a success, Davies said NU still has “far to go” on topics related to queerness.

Proposals made at the dialogue for improvements on campus included evaluating safe spaces for bias, emphasizing queerness in True Northwestern Dialogues for first-year students and requiring students to take classes on gender and sexuality. Overall, students at the event agreed that the discussions on queerness should be continued on campus.

“The event was well-attended and incredibly productive,” Mackey said.

Correction: A previous version of this story misstated Pauline Moll’s position on WAVE Productions. Moll is the community outreach coordinator. The Daily regrets the error.