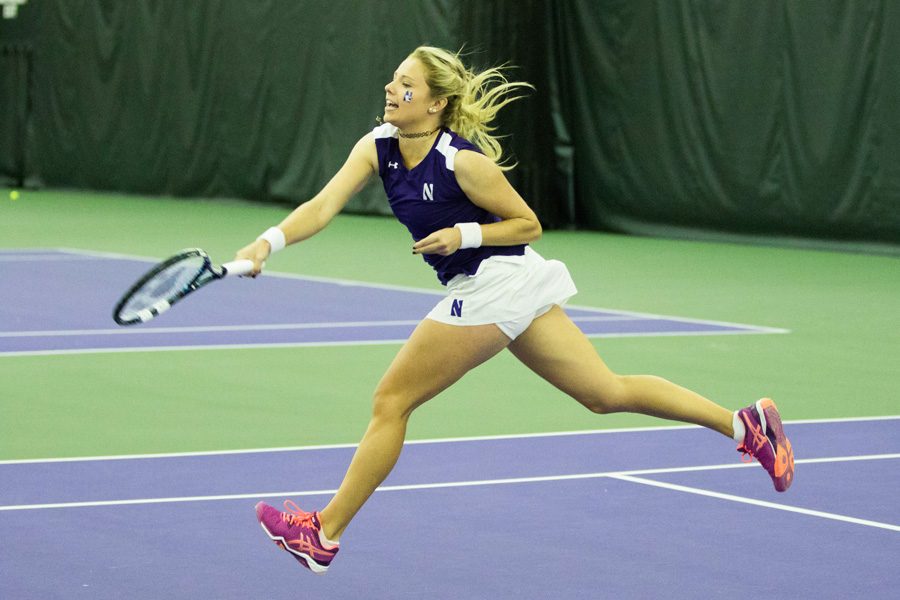 Alex Chatt reaches after the ball. The junior won one singles match at the ITA Midwest Regional but lost her second.

The weight of the weekend rested on Maddie Lipp’s shoulders.

The junior was one of four Northwestern players who traveled to Michigan last weekend for the ITA Midwest Regional Championships. Though Lipp was the No. 2 seed in singles and paired with fellow junior Alex Chatt to form the top-ranked doubles team, she won no titles and lost in the quarterfinals of both draws.

Lipp and Chatt, the No. 8 doubles team in the country, sailed through the round of 32 in doubles Friday after receiving an opening round bye. Saturday was a similarly strong day for the junior duo, which took down an Eastern Michigan pair 8-2 to advance to the quarterfinals. In singles, Lipp battled her way to a three-set victory over Michigan State’s Aslina Chua.

Sunday was less kind to Lipp and Chatt, however, who were upset 8-4 by Michigan’s No. 5-8 seed team of Kate Fahey and Alex Najarian. Junior Erin Larner and sophomore Lee Or also fell to a different Michigan duo Sunday.

Lipp rebounded in singles with an easy 6-0, 6-1 win over Ines Vias of Illinois. Her momentum ended Monday, though, in a three-set loss to Michigan freshman Chiara Lommer. Lipp was in good position after winning the first set, but Lommer leveled the match at a set apiece and cruised to a 6-0 win in the decider.

Despite her quarterfinal loss, Lipp was the best NU singles player on the weekend. Chatt won her first match, but then fell in three sets in the next round. Larner, the No. 4 seed in the draw, was upset by Akron’s Ariadna Blinova in her first match. Or won one match before being eliminated.

The Cats return to play Nov. 3 when they travel to California for the Kramer Classic.