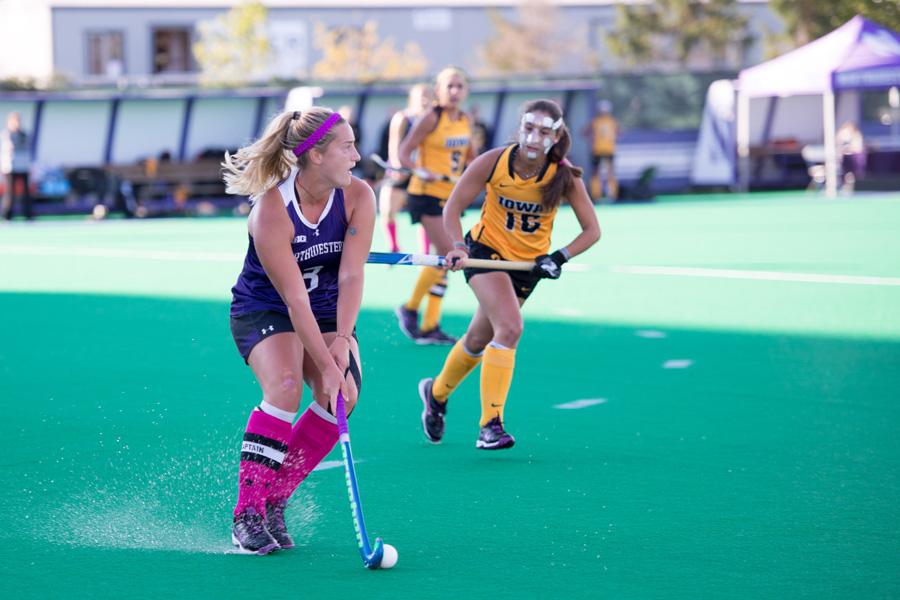 Dominique Masters looks up to make a pass. The senior midfielder is one of nine international players on NU’s current roster. (Daily File Photo by Jonathan Dai)

Dominique Masters looks up to make a pass. The senior midfielder is one of nine international players on NU’s current roster.

When Isabel Flens was 10 years old, she saw a story in a field hockey magazine about a Dutch player who went to the United States to play in college. It intrigued her.

Though her interest was piqued, the prospect of going abroad quickly faded from her mind. Only several years later did it reemerge as a legitimate possibility.

Flens eventually made her way from Hattem, Netherlands, to Evanston, where the senior forward is now arguably the brightest star on a deep Northwestern roster with nine international players. Her path mirrors a widespread trend of talented foreign players moving stateside for college, seeking an education and an opportunity to play a sport that is still working to find mainstream popularity in the U.S.

Several international players described their recruiting processes as relatively similar to those of American players. Through friends, Skype and official visits, players from the Netherlands, United Kingdom and elsewhere are becoming increasingly interested in NU, and more players than ever are actually making it to campus.

“It was just the balance between the academics and the great field hockey program,” said junior forward Pascale Massey, a native of Bromsgrove, England. “It was a perfect fit for me, really.”

Field hockey is nowhere near a mainstream sport in the U.S. Fewer than half the states have organized high school competition, and the sport’s popularity is most concentrated in the Northeast. Just four of the 79 Division I programs are on the West Coast.

In countries like the Netherlands and Great Britain, on the other hand, the sport is far from obscure.

“Everybody plays hockey over there in Europe,” coach Tracey Fuchs said. “It’s like baseball over here.”

Fuchs has had international players on her roster every season since she took over the Cats’ program in 2009. That year, Chelsea Armstrong, NU’s all-time leader in goals and total points, arrived from Australia.

Only in recent years, however, has the volume of foreign players in Evanston grown. Five international players were on the roster in 2013, and nearly twice as many are in the program today.

Once international players started joining the Cats, Fuchs said, it became easier to draw more of them.

“The internationals who have come here have had an amazing experience. … They love it,” Fuchs said. “That helps, because they have friends at home that want to come.”

Nonetheless, recruiting international players presents a handful of challenges not present when targeting Americans. NU loses roughly a third of its potential foreign player pool because of concerns about English language proficiency and the University’s rigorous admissions standards, Fuchs said. Travel offers another challenge, and after 17 seasons trotting the globe with the U.S. national team and a long coaching career, Fuchs is content to leave international recruiting trips to assistants Ali Johnstone and Will Byrne.

The volume of players the staff looks at is also different at home and abroad.

An influx of international recruiting services has both spiked player interest in competing at the NCAA level and directed coaches to potential prospects, Fuchs said. Similarly helpful are Fuchs’ connections within the field hockey world, which are numerous thanks to her lengthy playing time with the national team and experience as a longtime assistant at Michigan.

Such a connection played a significant role in bringing senior Dominique Masters, now fifth on the Cats’ all-time goal list, to Evanston. Fuchs’ prior relationship with Masters’ coach in England first drew the midfielder’s interest in coming abroad.

“I did not even think I would attempt to come to America. I didn’t know the standard of hockey that was out here,” Masters said.

A meeting about NU led to an official visit, however, and she was sold.

Many international players echoed the sentiment that a welcoming team environment, high level of play and dedicated coaches led them to NU. Several also noted the importance of academics in their decision.

“I thought I could really make something of myself here, not just for the field hockey but a degree from here,” Masters said. “Everyone always tells you a degree from Northwestern is like the best thing.”

Like her British teammate, Massey said she took a long-term view when making her decision.

“Ultimately, I’m not going to play hockey for the rest of my life,” Massey said. “So getting a good education is just as important as playing for an amazing team.”

Beyond the quality of the education, price may be a critical factor in drawing foreign players as well. When asked why the Cats continue to have more internationals on their roster than ever before, Fuchs pointed to, among other things, changes in the economics of European education.

“Higher education in some of those countries is getting more expensive,” Fuchs said. “It used to be free in many countries, and now it’s not. A chance for them to get a scholarship or a partial scholarship helps.”

Flens and senior goaltender Lindsay von der Luft still talk about their freshman preseason. But instead of reminiscing about how taxing practice was or the size of a dorm room, they remember their often humorous attempts to communicate.

“I would say, ‘What time’s practice,’ and Lindsay would say, ‘uh-huh,’” Flens said. “It was a smiling and waving situation pretty much. We would just smile and nod.”

Flens said her teammates were generally helpful, and she quickly overcame the language barrier. Nonetheless, language is but one adjustment foreign players must deal with when they arrive at NU.

Some acclimations are relatively mundane — Masters mentioned getting an American bank account and phone plan — while others are more universal, like homesickness.

To help with the adjustments, some older international players have acted as mentors for younger foreigners. Multiple players said they realized the importance of helping underclassmen if they were struggling.

“We’re a bit of a community within our team,” Massey said. “It’s nice that we can all help each other, and we can relate to things that we feel, whether we’re homesick or we just want to eat sausage and mash and beans.”

Foreign players also have to acclimate to differences on the field. Several, including Flens and Masters, said the American game relies more on physicality and work rate than skill.

Beyond the subtleties of the style of play, the sheer amount of time involved in preparation is a challenging transition for many players.

“We train a lot more,” sophomore midfielder Lucy Waterhouse, of Brisbane, Australia, said. “At home we only had like an hour a week of training. It’s quite a big adjustment going from such little to the other extreme.”

In some ways, however, the international players may be more prepared to play at a high level right away. Girls in Europe and Australia are likely to pick up a stick at age three, Fuchs said, compared to nine or 10 in the United States. Because they play almost exclusively on turf fields, the coach said, foreign players may also be better accustomed to the college surface, since many Americans spend some time on grass fields.

Whatever the reason, international players have thrived on the field as Cats. Flens and Masters are two of NU’s most prolific scorers of all-time and have led the team’s attack for several years. Four other foreign players are regular starters for NU this year, including Massey.

Couple that history of success and the program’s atmosphere with the University’s academic prestige and location, and Fuchs’ job in recruiting foreign players is straightforward.

“Our players are the best recruiters we have,” Fuchs said. “They sell the place because they love it. I literally just have to sit here and be the closer.”