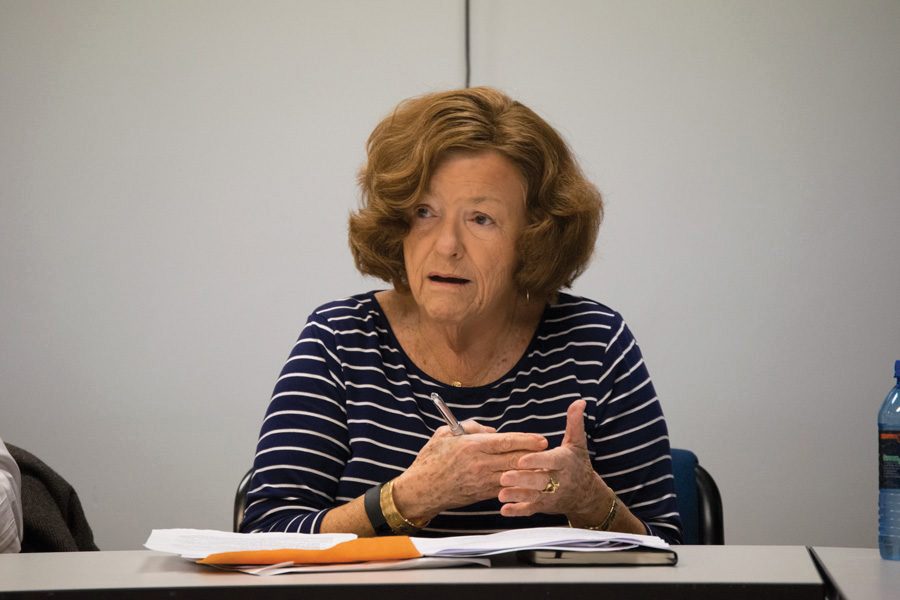 Ald. Ann Rainey (8th) speaks at a city meeting. Rainey voiced support Monday for an idea to reduce the bike lanes on Dodge Avenue from one to two lanes.

Following uproar over the bike lanes, which were built this summer, aldermen raised concerns at the Sept. 12 council meeting about problems with lanes, including buses blocking traffic when loading passengers and poor visibility for cars turning onto Dodge Avenue.

City staff will determine whether or not the changes can be implemented within 30 days, before the weather turns colder. If they are unable to do so, the plan will go forward in the spring, city manager Wally Bobkiewicz said.

“We have to get a contractor to come out before it freezes,” Bobkiewicz told The Daily. “The question is, will we be able to do that? We should see frost by Dec. 1, so if we can get it done in 30 days we will try to.”

Lara Biggs, the city’s engineering and capital planning bureau chief, presented to the council an analysis of parking, bike lane and traffic flow improvements on Dodge Avenue following the construction of the bike lanes.

To determine whether or not to implement the bike lane improvements, city officials studied how many parking spots would be lost if bus drop-off zones and “visibility zones” were to be added.

All intersections on Dodge Avenue from Lake Street to Howard Street were examined as part of the study.

About 20 people showed up to voice opinions on the proposal, including Evanston residents, current and former CTA supervisors and Northwestern Associated Student Government representatives.

One public comment that drew some support from council members suggested eliminating a bike lane on one side of the road, leaving only one lane for bikers traveling southbound on Dodge Avenue. Ald. Ann Rainey (8th), who has called the plan a failure in previous council meetings, and Ald. Brian Miller (9th) agreed with the idea.

“I believe the cyclists are safer in these bike lanes; I truly believe that,” Rainey said. “What I don’t believe is that the motorists are (safe), and I don’t think that there is a balance.“

Miller asked Biggs to look into potential funding for the removal of one of the bike lanes on Dodge Avenue, similar to bike lanes on streets such as Church Street and Davis Street.

However, Ald. Donald Wilson (4th) and Ald. Melissa Wynne (3rd) disagreed with the proposal put forward by the uncommon coalition of Rainey and Miller. Wilson, who is recreational cyclist, said having a bike lane on just one side of the road “doesn’t make any sense,” as it might invite bikers to go both directions on a one-way lane or push bikers onto sidewalks.

Wynne’s main problem with the proposed bus drop-off zones concerned emergency vehicles causing cars to pull over into the zones. She suggested the city ask the Northwestern University Transportation Center, which “aims to influence national and international transportation policy,” to assist in computer modeling of such situations after Biggs said Evanston did not have modeling capabilities itself.

“I’m sure this would not be hard to model for them,” Wynne said. “If we can actually do some computer modeling, we’re not operating on anecdote anymore; we’re actually looking at fact and figuring out whether these are the right solutions to solve the problem.”