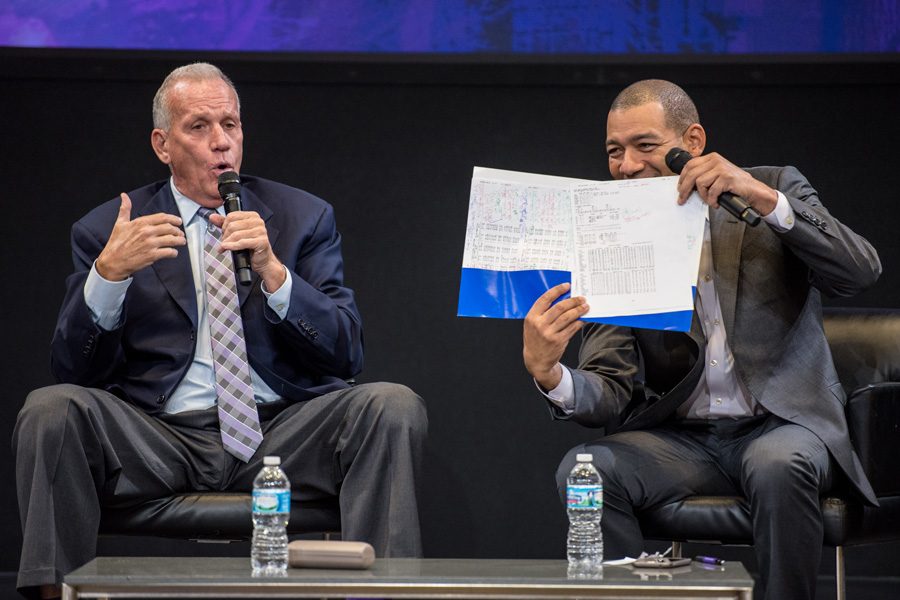 Collins — whose son Chris is the men’s basketball coach at Northwestern — addressed questions about coaching Michael Jordan, analyzing basketball and various other components of his coaching career in front of a full house at the McCormick Tribune Center.

“Michael Jordan is the greatest player in history, ever,” Collins said while discussing his experience coaching Jordan. The star played on Collins-coached teams from 1986 to 1989 while on the Bulls as well as with the Washington Wizards from 2001 to 2003.

Adande also showed short clips of basketball games for Collins to discuss. One clip was of “The Shot” — one of Jordan’s most famous plays and game-winning shots — from the 1989 Eastern Conference playoffs against the Cleveland Cavaliers, during which Collins was coaching the Bulls.

“There is a point for every franchise where there is a breakthrough moment,” Collins said. “Winning Game 5 in ’89 versus the Cavs was that moment.”

Adande asked Collins to walk the audience through Jordan’s game-winning shot against the Utah Jazz in Game 6 of the 1998 NBA Finals. Collins said Bulls forward Scottie Pippen, playing with an injured back, ran down the court to draw a defender away from the middle of the court, allowing Jordan to make one of the most famous shots in NBA history.

The sequence was played twice, and Collins encouraged the audience to play close attention to details. He said without Pippen’s presence on the wing, though it seemed trivial at first, Jordan may not have had the space to make the shot.

In addition to game analysis, Adande and Collins also discussed the importance of statistics.

“To what extent do statistics tell ‘the story?’” Adande asked.

Collins applied his basketball knowledge to the upcoming NBA season, adding that Houston Rockets guard James Harden could win the NBA MVP this season because of the scoring uptick he sees in Coach Mike D’Antoni’s coaching system.

“If you’re in a fantasy league, grab him quickly,” Collins said.

D’Antoni is known for the “seven seconds or less” offensive strategy, where his team tries to get a shot off in the first seven seconds of the shot clock.

Weinberg sophomore Blake Maier, who was at the event, said Collins’ strength is knowing how to use the skills of his players.

“He knows that you can’t teach talent, so he talked about how his game plan revolved around who his best players were and making sure they had the ball when the time was necessary,” Maier said.

Collins concluded by discussing the influence basketball has had on his life.

“Basketball has not been a game to me,” Collins said. “It’s been my life.”