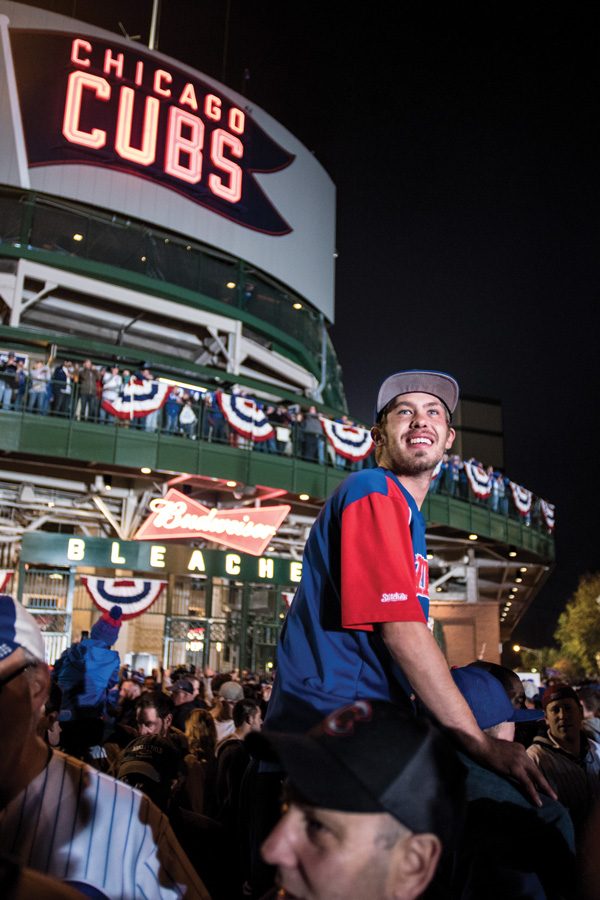 A Cubs fan smiles outside Wrigley Field after the Chicago Cubs defeat the Los Angeles Dodgers on Saturday night. The team won 5-0 in Game 6, making it to their first World Series in 71 years.

As his team fought for a historic World Series appearance, lifelong Chicago Cubs fan Sammy Esparza decided he would do his part to help end a curse.

The curse was that of the Billy Goat, which — the story goes — has plagued the North Side team for decades. In 1945, William “Billy Goat” Sianis was barred from bringing his pet goat into a playoff game at Wrigley Field. It is said Sianis then cursed the Cubs, and the rest is history: The team struggled over the rest of the century, tallying only 21 winning seasons since.

In an attempt to reverse the curse, Esparza started a GoFundMe page to raise $107, representing the 107 seasons that have passed since the Cubs last won the World Series. Esparza raised the money in less than 24 hours, and used it to purchase a goat — named “Billy” — for a family across the world in need of dairy.

“The thought is that the curse of the Billy Goat will go with that goat,” the Weinberg senior said, “and the Cubs can now win a World Series.”

For the first time since the curse supposedly began, the Cubs have won the National League pennant. They beat the Los Angeles Dodgers 5-0 in Game 6 on Saturday night, winning the series 4-2, and punching their ticket to a World Series against the Cleveland Indians.

The Cubs last won the World Series in 1908 and have not appeared in one in 71 years.

Preston Michelson, a lifelong baseball fan who works as a media intern for the Cubs, said being behind the scenes has changed his perspective on the team.

“When you’re at every home game, you just are connected to the team,” the Medill senior said. “You feel all the highs, and you feel all the lows, and you just understand this fan base and what it means to them. It’s pretty special to see the same faces at the ballpark everyday and see some really happy people yesterday.”

He said he “couldn’t even see the road” hours before Saturday’s game because fans had swarmed the streets. He added that the Cubs are unique because they often play during the day and still fill the ballpark.

“It’s not something you’ll see in other cities,” he said. “It really shows how much it matters to the team, and this city is just connected to the team.”

McCormick junior Pierce Gleeson, who grew up in Naples, Florida, but said he was raised as a Cubs fan by his Chicagoan parents, said he hopes to participate in future celebrations at Wrigley.

He said he remembers watching the Cubs play the Miami Marlins over the summer and how heavily the losses weighed on his father.

“This World Series is something really special for everyone I know (who is) a Cubs fan,” Gleeson said. “This is the year. I think we’re going to win it.”

Weinberg senior Juan Rodriguez, who went to Wrigleyville for Saturday’s game, said he feels optimistic about the upcoming games.

“I still think that they could do it and win it because this team is so different and really good,” he said. “This is the most excited I’ve been, as well as other Cubs fans have been, in a long time, I think.”

The World Series will begin in Cleveland on Tuesday night.

“I’m excited, the city’s excited,” he said. “I feel this buzz in the air — I can’t describe it to you, but I feel it everywhere I go.”