Football: Another ‘thanks,’ another interception for Wildcats’ secondary 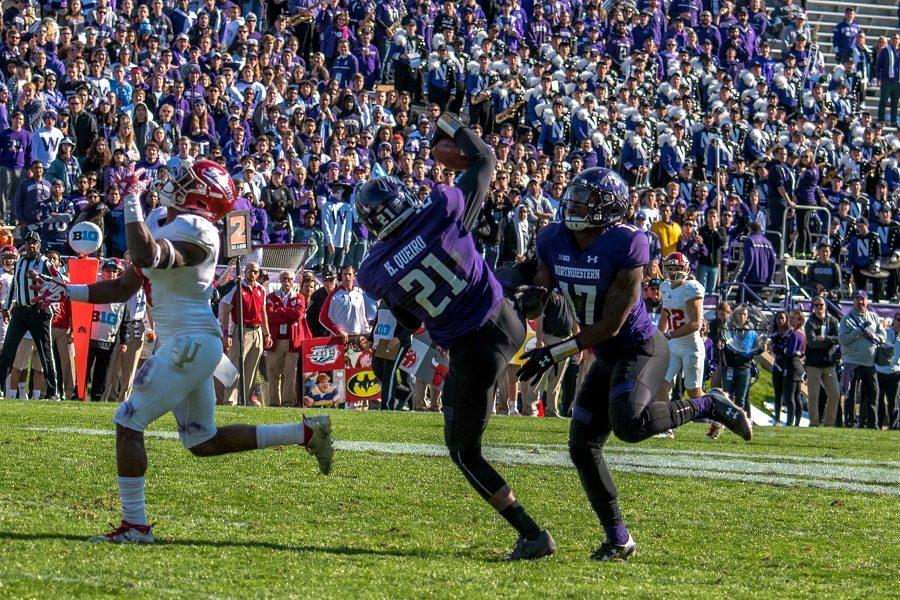 Kyle Queiro intercepts a pass with one hand. The junior safety tweeted out before the game "Thanks for the INT."

Kyle Queiro turned and located the ball while he backpedaled, then reached his right hand up as he fell.

“We were in a three deep coverage,” Queiro said. “Actually I was supposed to be the post, but I messed up. I came downhill and immediately I turned around and ran straight … when I decided I was far enough back, or deep enough rather, I looked up, and I saw the ball.”

When he landed, the football was in his breadbasket, and the junior safety had his first interception of the season. He looked at his left hand, wrapped in a cast, and then pointed toward the sky. Thanks were in order.

Queiro had tweeted “Thanks for the INT” the night before Northwestern (4-3, 3-1 Big Ten) took down Indiana (3-4, 1-3) on Saturday, following in the footsteps of fellow Wildcats safeties junior Godwin Igwebuike and sophomore Jared McGee. Igwebuike and McGee each preemptively posted on social media to thank God for interceptions earlier this season.

Igwebuike inspired the trend when he called his shot on Twitter before the Wildcats’ win over Duke and then followed it up with an interception off Blue Devils quarterback Daniel Jones. McGee repeated the feat in the Cats’ 54-40 victory last week by picking off Michigan State quarterback Tyler O’Connor after a pre-game thank you of his own on Instagram.

“I’d seen Godwin and Jared do it,” Queiro said. “Going into Friday night I just kind of felt it, to be honest. There’s really no other way to explain it. And we talked about speaking it into existence, in a way.”

Queiro’s interception may have been the most impressive — and improbable — of the three. His club-like cast forced him to take a one-handed approach to the fourth quarter pick, and the leaping play would have been difficult even if he had two fully operational hands.

The interception was also a major play in the game, putting a stopper on a fourth-quarter Hoosiers drive that could have cut Indiana’s deficit to one score. The Cats had already ceded momentum in a game they once led 24-3, and the scoreboard stood at 24-12 when Indiana got the ball with 7:22 left in the game.

But Queiro snuffed the drive on its second play with the acrobatic pick.

The team’s defensive backs stepped up throughout the day, forcing Indiana quarterback Richard Lagow into 24 incompletions on 59 attempts while holding him without a touchdown pass. Sophomore cornerback Montre Hartage also had an interception, making a remarkable no-look, one-handed pick in the second quarter.

After getting torched for 424 passing yards and four touchdowns against Michigan State, Igwebuike credited preparation for the bounce-back performance.

“We wanted to step up this week,” Igwebuike said. “It started with focusing in practice at all times.”

The seemingly preordained interception from Queiro highlighted the strong performance.

Coach Pat Fitzgerald said he didn’t think the three social media posts this year had much to do with his players’ interceptions, but made a request of his players in advance of their game against Ohio State.

“I hope they all tweet it out next week,” Fitzgerald said.