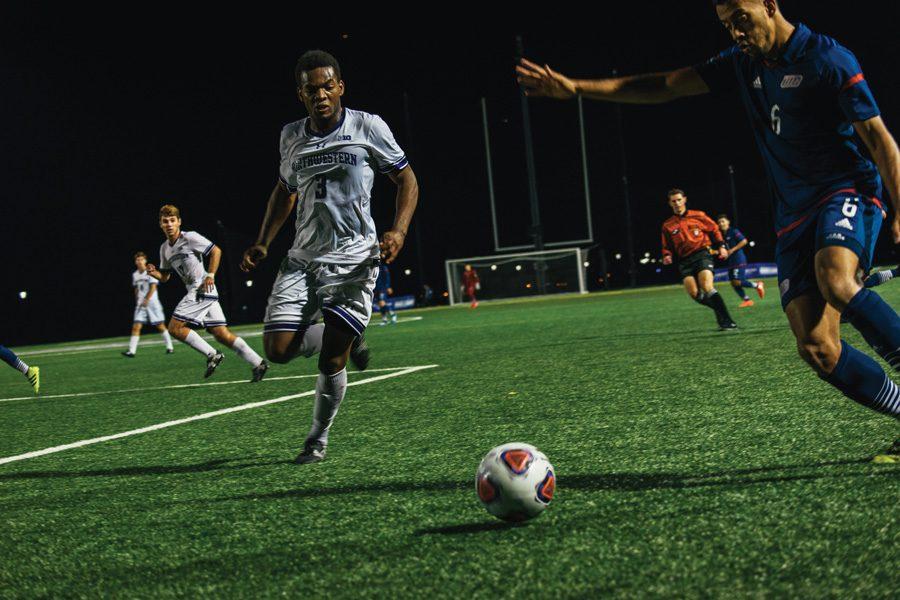 Andrew McLeod covers a run outside the box. The freshman defender and the rest of Northwestern’s defense will try to hold up against No. 20 Michigan State as the Wildcats look for a third-straight win.

After taking down a giant in its last match, Northwestern will look to do it again at No. 20 Michigan State this Saturday.

Although the Wildcats (4-9-1, 2-3-1 Big Ten) have suffered rough losses for most of the season, they will look to build off a 2-1 overtime upset against No. 4 Notre Dame. Senior forward Mike Roberge, who scored the winning goal, said he was thoroughly impressed with his team’s offensive performance against the Fighting Irish.

“We were more efficient in the offensive third,” Roberge said. “We were able to capitalize on the chances we had.”

The Cats are coming off back-to-back overtime wins, and their best performance of the season came in the Notre Dame game. If NU pulls out the win against the Spartans (10-3-1, 3-2-1), it will be the first time this season that they muster back-to-back victories against ranked opponents.

For a team that has consistently struggled to score goals this season, the offense has been the key to recent victories. A third of the Cats’ goals this season have been scored in the last two wins, as NU has won its last two games with two goals each.

But Michigan State will test NU’s offense, as the Spartans have allowed just 10 goals this season, tied for best in the Big Ten. However, the Fighting Irish had allowed seven goals on the season prior to taking on the Cats, so NU recently proved it can challenge strong defenses.

The Cats have been incredibly inconsistent this season, but they have certainly shown they have the talent to take down ranked teams. Outside of the win over Notre Dame, NU also pulled out a victory against now-No. 11 Florida Gulf Coast on Aug. 26 to open its season. In spite of the wins over strong teams, the Cats’ overall record does not reflect their potential.

On top of the inconsistency, NU will face a tough environment at Michigan State. The Spartans have have won every game at home except for one draw. Meanwhile, the Cats’ only road win came against a Rutgers team that is dead-last in conference standings.

There’s a lot going against NU in Saturday’s matchup. But sophomore midfielder Shannon Seymour said the team — for once — has momentum on its side.