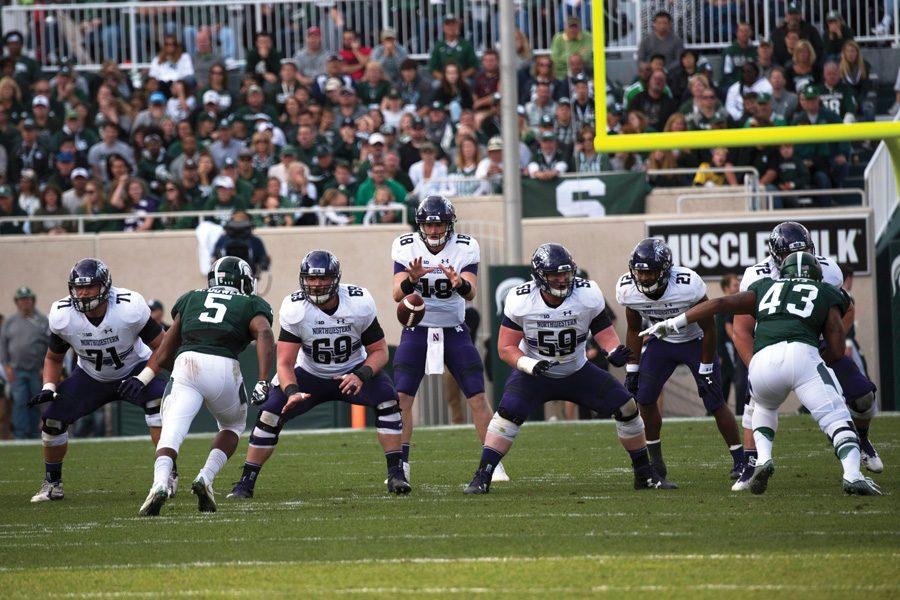 Northwestern snaps the ball to quarterback Clayton Thorson. The offensive line has allowed just two sacks over its past two games.

Through six games, Northwestern’s offensive line hasn’t been great. But at the season’s midpoint, it’s finally showing signs of life.

The Wildcats (3-3, 2-1 Big Ten) rank seventh-worst in the nation in opportunity rate, or the percentage of rush attempts that go for at least five yards, according to FootballOutsiders.com. Though junior running back Justin Jackson has managed to overcome this — he leads the Big Ten in rushing — it’s still an indictment of the O-Line, which has a lot to work on.

“With me and Connor, the two senior guys on the offensive line, the only thing we can do is keep working and hopefully the work will pay off,” senior lineman Eric Olson said. “I think the start of the Duke game, our offense really started heading in the right direction, and we’ve taken a bunch of steps forward.”

The offensive line has struggled on passing downs as well. Sophomore quarterback Clayton Thorson has already taken 17 sacks, just five away from the 22 he took last year, and seemingly big play after big play has been called back this season due to holding penalties.

Things have been different the last two games. The O-Line only allowed one sack to Thorson in each — wins over the Spartans and Iowa. It’s a welcome sign from a unit that allowed a season-high five sacks against Duke and four against Nebraska in September.

But as sophomore guard J.B. Butler put it, the unit can be much better.

“We have so much more we need to improve (on),” Butler said. “We have so many talented guys up front, and we have great senior leadership. Obviously, a perfect game for us is everyone blocks everyone on every play, we score a touchdown on every play, but the biggest thing for us is just coming to work everyday.”

The biggest step the line group has taken so far, Butler said, is grinding through high-scoring wins and not “sitting on our laurels.” NU ran 86 plays against Michigan State last week.

Butler started for the first time in his career against Michigan State last weekend, filling in for injured senior lineman Connor Mahoney. As soon as he found out he was starting, Butler said he immediately went to study more tape to prepare.

Mahoney will be out again Saturday against Indiana, giving Butler another chance to impress.

If Butler continues to impress, NU could have a shot at picking up its fourth win in the last five games. With Indiana’s vastly improved defense coming to town for Homecoming, the Cats know they must keep moving forward.

“I’ve really been impressed with the interior of the Hoosiers. Really been impressed,” Fitzgerald said. “We haven’t played each other in a while, so we did our offseason study and got ready for them … and that’s just what jumps off to you, is the change that they’re playing defensively.