Facing underrepresentation, black STEM students find support in one another 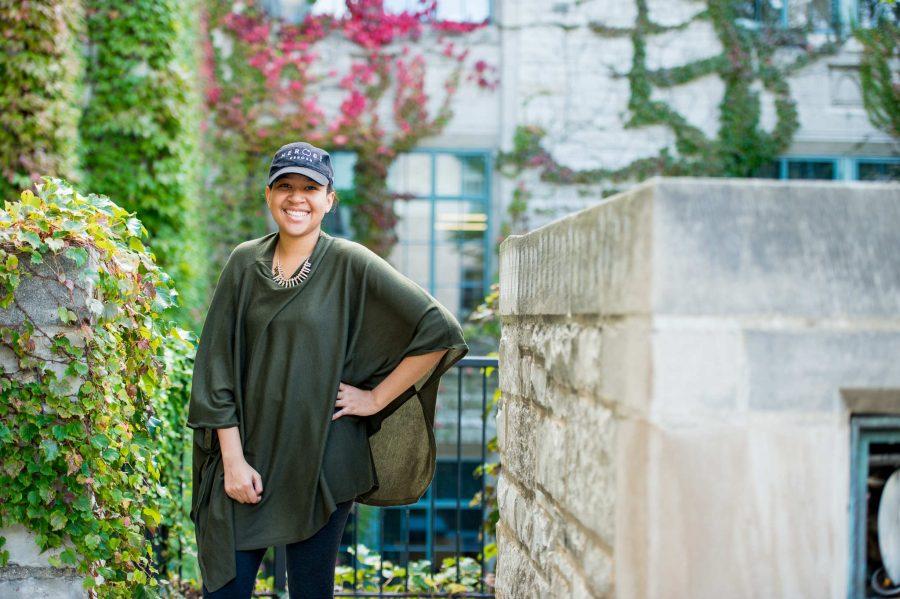 Kristen Cotton is a biomedical engineering major in the McCormick School of Engineering and Applied Sciences. Though underrepresented, black STEM students at Northwestern said they find support through programs like EXCEL and the National Society of Black Engineers.

John Franklin is taking five McCormick classes this quarter. In three of them, he’s the sole black student. In one, it’s just him and a friend.

“I’ll see him during class and say, ‘Hey Steven, it’s us two again,’” Franklin, a McCormick junior, said. “The higher I go, especially in my education, the more I feel like the only black student in class.”

According to a Northwestern report released in September, 106 black students were enrolled in the McCormick School of Engineering and Applied Sciences during Spring Quarter 2016, with 1,700 undergraduates in the school overall. The report was compiled by a task force that reviewed surveys and held focus groups before making 14 recommendations for the University to improve the experience of black students.

The report described the doubts black students have about their preparedness for academic rigor in college, saying their insecurity is heightened by not knowing where to go for help. This, according to the report, leads to frustration, especially for black undergraduates in science, technology, engineering and mathematics fields.

Franklin, an electrical engineering and computer science major, said he has become accustomed to the idea of being the only black student in class.

“I definitely am aware of the state I’m in,” he said. “It’s something kind of innate, something I’m used to doing. It doesn’t necessarily bother me or really impact my education heavily, but it’s just discouraging at times.”

The biggest challenge the STEM fields face when recruiting students of color is getting them excited for a career in science, Franklin said. As the telecommunications chair of NU’s chapter of the National Society of Black Engineers, Franklin said he has reached out to high school students in an attempt to increase their interest in STEM.

To get more students of color in STEM programs, Franklin said students need a role model — someone who can tell them, in his words, “Hey, I’m here; I can do it, so can you.” But that support, he said, needs to continue once they are accepted to and enrolled in a university.

Alexander Johnson, a McCormick junior majoring in electrical engineering, said he found the support he needed in NSBE, which currently has about 30 members at Northwestern. Now the treasurer of the organization, Johnson said the group works to make the experience of black freshman engineering students easier by collecting class notes from older students, offering professional networking events and providing tips for job fairs and interviews.

“Sometimes (black students) come from high school and there’s this huge gap between what they know and what a lot of the other freshmen know,” Johnson said. “So we work to try to close that.”

McCormick senior Randall Harris, who studies computer engineering, used to be an executive officer for NSBE. He said institutional support for the group is a good start for making the STEM fields more accessible to black students. However, he said the lack of diversity among faculty in STEM fields at NU can make students feel less understood on campus.

“In terms of being comfortable (it definitely helps) being around other people…that just understand certain things that people who aren’t of color wouldn’t understand,” Harris said.

Harris also gets support from his adviser, one of the five black McCormick professors registered by the University, based on its 2014 Data Book. Another resource he took advantage of was EXCEL — a program for incoming freshmen of low-socioeconomic and/or minority backgrounds in STEM fields — where he made long-lasting friends and connections.

Students like Kristen Cotton, a junior studying biomedical engineering, also participated in EXCEL as an incoming freshman and later served as an advisor to the program. She said EXCEL helped participants build the communities necessary to make it through college, Cotton said.

“In McCormick, if you’re a black engineer who didn’t go to EXCEL … it’s always like ‘Dang, you messed up,’” she said. “You can still hang out and be a part of our family, but EXCEL is probably the best resource McCormick has to make black students feel comfortable.”

Cotton added that her identity as a black engineer comes before her identity as a female engineer. According to Fall Quarter 2015 enrollment statistics, women make up nearly one third of the total McCormick student population. However, Cotton said it’s evident that there is a lack of black students in the engineering school.

The underrepresentation of black students in STEM fields leads to a smaller pool from which to hire future professors and leaders of STEM programs at universities, McCormick professor Russ Joseph said. This is the result of a “pipeline problem” that begins early in a student’s education, African American studies professor Debra Thompson said.

“Students who want to go into the STEM field are often discouraged or pushed out or don’t have the prerequisites to give them a firm foundation,” she said.

Cotton said she considers herself lucky because her parents were both engineers, which inspired her to become one as well. However, she acknowledged that, generally, black students don’t consider going into STEM fields because they’re not exposed to other black scientists or engineers.

Having a more diverse faculty and student body can do more than just encourage other students of color to pursue STEM fields, Harris said. This would also allow for identification of problems that often go unnoticed because they are only experienced by people of color.

As an example, Harris referenced the engineering behind the creation of color film in cameras, which for years only accurately developed white skin. This happened because photos were developed using a “Shirley” card, which meant pictures were calibrated using a shot of a white woman, whose skin set the tone for a picture’s color balance.

“I was just thinking like, ‘Man, if there were people of color in those fields, then they would’ve thought about those things, and they would’ve fixed it,'” Harris said.