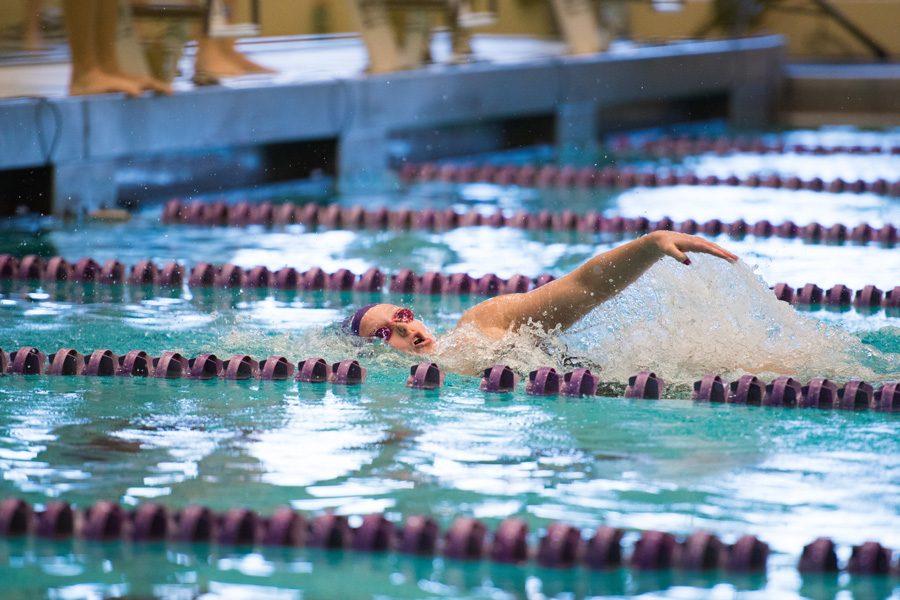 Lacey Locke swims for the wall. The senior captain figures to be one of Northwestern’s leaders as the team prepares for the season.

After turning out improved performances at the Big Ten Championships in 2016, Northwestern is working to build on those accomplishments during this upcoming season.

“We’re figuring out our routine early in the season,” senior captain Lacey Locke said. “So when it matters, and there are big meets, we know exactly what our routine is and don’t even have to think about it. It’s just second nature.”

The Wildcats finished eighth in the Big Tens in 2016, barely more than 220 points behind seventh-place Penn State. Sophomore diver Olivia Rosendahl, who was named to the All-Big Ten Second Team, was the only team member who competed in the 2016 NCAA Championships in March.

As a result, NU’s swimmers and divers are looking beyond their meet Saturday against the University of Chicago and the University of Illinois at Chicago with clearly defined objectives, like improving their execution and consistency with the future in mind, coach Abby Steketee said.

Entering her second year leading the Cats, Steketee has her squad concentrated on long-term goals and preparation for Big Tens.

“We don’t change training for specific meets,” Steketee said. “The training cycle is based for each person to go their lifetime personal records at Big Tens.”

Although NU has prioritized fitness work over its first five weeks of practice, Steketee said training has transitioned into the “competitive phase” which focuses on pace, power and speed work, along with event-specialized training.

The Cats have also focused on strengthening the intangible advantages, such as team morale, which they can use to find success, Locke said.

“We’d like to be the most spirited team in the Big Ten,” Locke said. “If you command the deck with energy, then you can command the meet.”

NU hopes to capitalize on the experience of veterans on both the swimming and diving sides, but freshmen have also shown signs of being contributors right away. During workouts, despite being newcomers, the freshmen have shown a willingness to lead lanes, which Steketee said is indicative of the group’s overall confidence and determination.

“This is probably one of the most diverse freshman classes I’ve seen,” Postoll said. “One thing they have in common is that they all bring really high energy.”

Steketee said she plans to work on fostering cohesion within the squad throughout the year, identifying elements of teamwork and communication needing improvement during practices and dual meets.

“They’ve done a phenomenal job balancing that day in and day out competitive energy with really taking care of each other,” Steketee said. “Our seniors have done a great job reaching out to our freshmen and helping them understand where resources are.”

Although Steketee applauded the team’s senior leadership, the athletes praised the guidance and support their coach provides, Postoll said.

“I think of Abby as a second mom,” Postoll said. “We talked about tough love and loving tough, and I really think she brings both of those to every girl on the team. It’s awesome to have someone like that to look up to.”