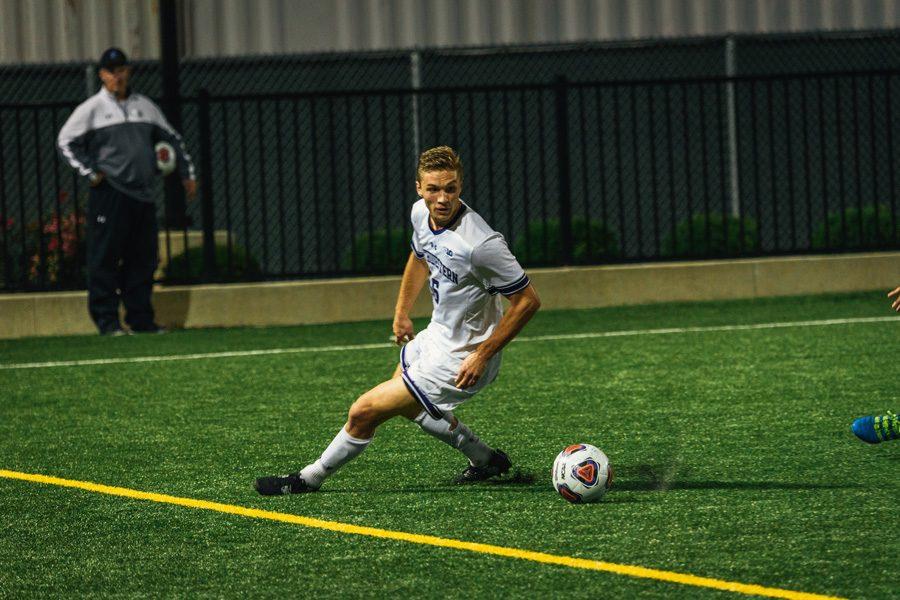 Mike Roberge eyes the ball. The senior forward scored the game-winning goal in overtime as the Wildcats upset No. 4 Notre Dame, 2-1.

Two years after a struggling Northwestern football team recorded a historic win over Notre Dame, the men’s soccer team did the same in a 2-1 overtime win over the No. 4 Fighting Irish (10-3-1) at Toyota Park in Bridgeview. Senior forward Mike Roberge scored the sudden-death, game-winning goal early in the extra session.

NU (4-9-1, 2-3-1 Big Ten) played well from the opening whistle, and the squad’s early pressure paid off in the 25th minute as sophomore midfielder Shannon Seymour scored his first career goal. The score came off a deflected shot from junior forward Elo Ozumba which landed at the feet of Seymour, who drove a low ball into the net.

Seymour said scoring his first goal against a top-5 team felt like being “on top of the world.” But he said that initial joy didn’t last long as Notre Dame midfielder Mark Gormley scored less than a minute later to tie the game.

“We couldn’t regain our focus right away,” Seymour said. “But I still had faith. … I knew we’d fight back to get it.”

Although NU held firm through the rest of regulation, Notre Dame controlled most the chances. The Fighting Irish held a 10-7 edge in total shots, and Roberge stepped in front of a Notre Dame player to prevent a shot in the final moments of regulation.

Coach Tim Lenahan said junior goalkeeper Francisco Tomasino was key in keeping the visitors off the scoresheet for the last 60-plus minutes.

“They challenged him a couple of times,” Lenahan said. “But he had good team management and good box presence.”

The Cats wasted no time in the extra session, as Roberge netted the game-winning goal within the opening four minutes of the period. The goal was Roberge’s second of the season, with the first coming in similar fashion: He sunk an overtime winner against Michigan in late September.

Although Roberge ultimately scored the goal, he deflected the credit to Ozumba and junior midfielder Riley Kelliher, who were credited with assists on the play.

“It was just a great play from start to finish,” Roberge said. “Riley played a great ball; Elo made a great run. … We were saying if it was off by an inch any way, it probably wouldn’t have made it.”

Lenahan praised his squad for keeping Notre Dame from too many quality chances. Although he was disappointed the Cats lost their first-half lead in a matter of seconds, he was glad Seymour, who has suffered from injuries this season, scored his first goal.

After a three-game losing streak in which NU failed to score a goal, the Cats rebounded with a win over lowly Rutgers on Friday. Tuesday’s win gave NU consecutive victories for the first time this season and a statement win over one of the nation’s premier teams.

“We played well and stuck to our plan to clog the middle a little bit and counterattack them. We were able to do that for the game-winning goal,” Lenahan said. “We’re going to enjoy the win tonight and fuel up and get ready for a tough Michigan State game on Saturday.”