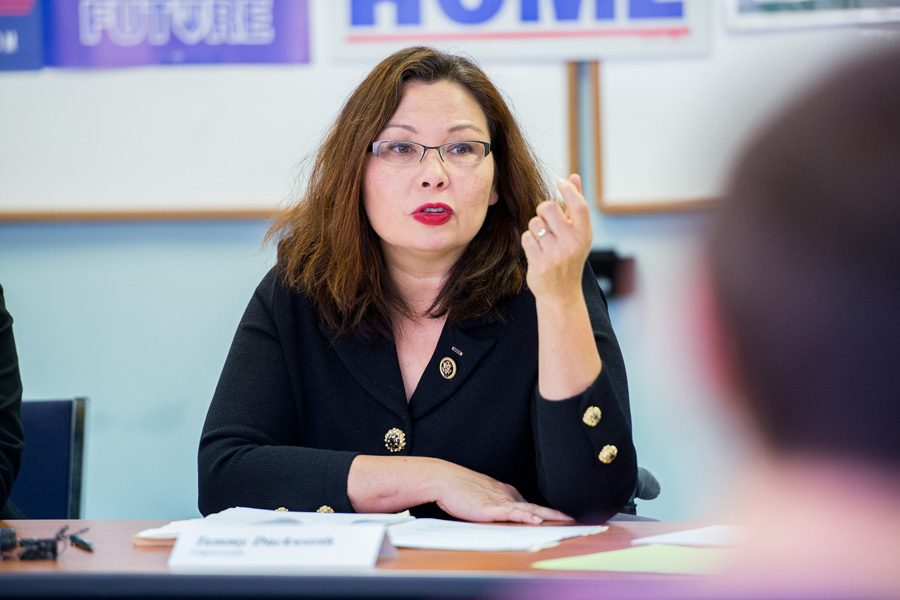 U.S. representative and senate candidate Tammy Duckworth addresses college affordability during a roundtable discussion with teachers and students. Duckworth advocated for the In The Red Act, which would provide additional grants and allow students to refinance loans.

CHICAGO — After her father lost his job, U.S. Rep. Tammy Duckworth (D-Ill.) dropped out of private school and entered the public school system. Duckworth — who is currently running for Senate against Republican incumbent Mark Kirk — said she relied on food stamps and other government services to get by, but never lost the hope of going to college.

Duckworth spoke about obstacles facing young people at a roundtable discussion with Illinois teachers and students Tuesday in Chicago. Duckworth said the lack of Pell Grants and affordable loans — and the need to refinance those loans — have left students hopeless.

As an Iraq War veteran who lost both her legs in combat, Duckworth said she approaches educational reform from a national security perspective. She said others in Congress view education as a “soft issue” or just another “handout.”

“When people talk about the strength of this nation, they talk about tanks and guns and helicopters,” Duckworth said. ”But when we talk about national strength and our role as a global leader, nobody talks about education as part of that foundation. If we don’t have affordable college education, we aren’t going to get the pilots to fly those aircrafts. … We aren’t going to get engineers who are going to be developing the next generation of fighter jets.”

The act was introduced in the House in April and has yet to be voted on.

One of the loopholes Duckworth hopes to close is an end to deductibility of executive compensation, which allows tax write-offs for performance-based bonuses. She said such exemptions — given to employees whose salaries often surpass $1 million — cost taxpayers over $50 billion over 10 years.

In addition, ending corporate tax inversions that allow U.S. companies to move their tax domicile — a person or company’s permanent address that is used for tax purposes — overseas would raise $25 billion over 10 years, she said.

“If you would just tax that, we would raise the $60 billion,” she said. “There is money out there, and that money isn’t going to hurt middle-income families.”

Duckworth reiterated that even without closing loopholes, cutting military spending would free up more funding for education.

American Federation of Teachers President Randi Weingarten, who hosted the roundtable with Greenblatt said she trusts Duckworth to enact affordable education reforms. She said Congress has failed over the past eight years, but that Duckworth understands the importance of affordable education because of her middle-class background.

“There is such obstruction in the U.S. Senate and House right now that even this common sense idea, which essentially is a fair taxation idea…hasn’t had the legs it needs to have because there aren’t enough people in Congress willing to do that,” Weingarten said.

Roundtable attendee Terrie Albano, 53, is now a student at Northeastern Illinois University. She said education cuts made under the Reagan administration forced her to drop out of University of Illinois in the mid-1980s.

The English major said shortly after James Thompson was elected governor in 1977, and Reagan was elected president in 1980, she received a letter saying her Social Security stipend and her Illinois state scholarship would be cut.

“Everything was to go to loans,” Albano said. “You can probably trace the student loan debt starting in 1980 with the Ronald Reagan election.”