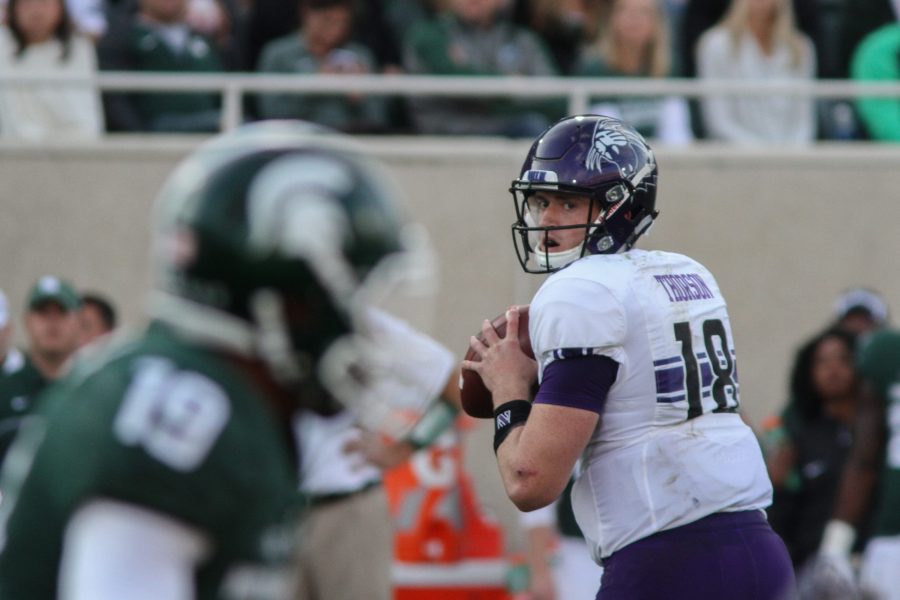 Clayton Thorson looks for a receiver. The sophomore quarterback tossed three touchdown passes, giving him 11 on the season.

EAST LANSING, Michigan — Through six games, it’s safe to say Northwestern’s offense — scrutinized and ridiculed for the better part of the last three seasons — is finally humming like a well-oiled machine.

Not only did its operator, sophomore quarterback Clayton Thorson, lead the Wildcats (3-3, 2-1 Big Ten) to nearly 500 total yards, as the Cats rocked Michigan State (2-4, 0-3) 54-40. Thorson engineered the highest-scoring performance by any visiting offense at Spartan Stadium — ever.

Completing nearly four out of every five passes for a career-high 27 completions, Thorson willed the Cats to their first 50-plus point game in four seasons. His on-field bromance with senior receiver Austin Carr continues to flourish, as the captain hauled in a personal-best 11 catches and a pair of touchdowns.

While Carr continued to pad his resume as the Big Ten’s best receiver, junior running back Justin Jackson set a career-high with 188 rushing yards. Saturday’s outburst so barely resembled the offenses of yesteryear, or even earlier this season, that Thorson’s first quarter pick-six was a distant memory by the time the clock hit zero.

“He didn’t lose his composure, he didn’t get upset,” coach Pat Fitzgerald said. “When you see that type of maturity from a younger player who’s still a redshirt sophomore at No. 1, to understand what (coverage) they were in, understand he made a mistake and to own it, that shows you why he came back and played as well as he did.”

It’s clear Thorson has taken the next step in his development, as he threw for three touchdowns for the third time in the past four games, and ran the ball in for another score. Recruited for his dual-threat abilities, Thorson is responsible for 14 total touchdowns against six turnovers so far this season.

But navigating the Cats through the waters of the Big Ten hasn’t always been smooth sailing for Thorson. The sophomore still has completed 50 percent of his passes or fewer in 11-of-19 career starts, and just six weeks ago cost NU a victory over Western Michigan when he fumbled at the goal line.

Still, if the past few weeks are any indication, it’s thanks to Thorson that the Cats are no longer the team they were at the beginning of the year.