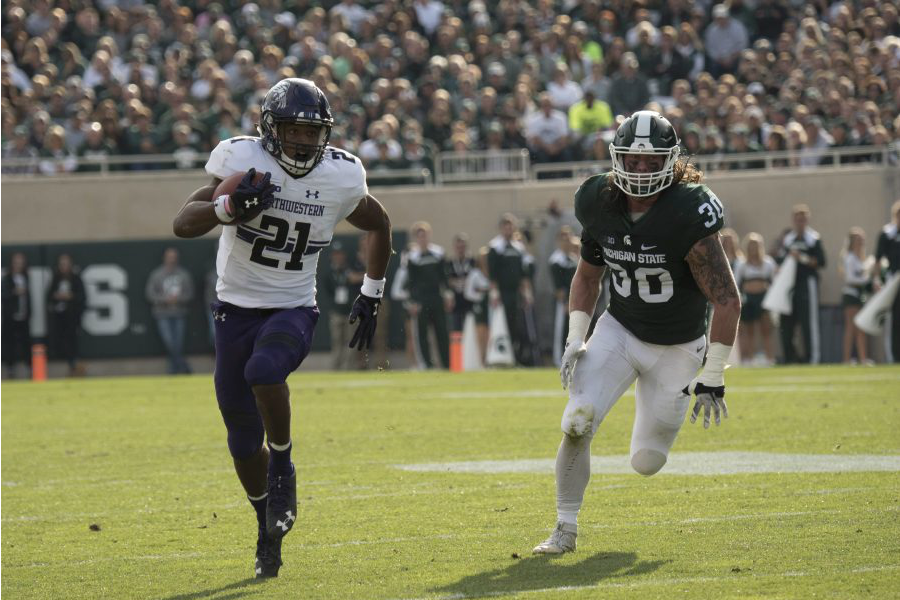 Justin Jackson carries the ball in the first half against Michigan State Saturday. The junior ran for 188 yards and two touchdowns.

For the second time in three weeks, the Wildcats (3-3, 2-1 Big Ten) spoiled the homecoming of a favored conference foe, taking down Michigan State (2-4, 0-3) at sold-out Spartan Stadium Saturday.

“You’ve got to have that mentality of like, team’s scheduling their homecomings against us, let’s make it our homecoming,” senior defensive end Ifeadi Odenigbo said. “We talked about it before the game, this is our homecoming right here.”

The Cats, who took down Iowa at its homecoming two weeks ago, got off to a rocky start in the eventual 54-40 victory.

Michigan State took an early 14-0 lead, as the Spartans scored quickly on their second drive and then used a pick-six from defensive back Justin Layne to dig an early hole for the NU.

“We knew they were going to try and knock us out early,” coach Pat Fitzgerald said. “We basically got what we expected … but I really loved the way our young men responded.”

NU used quick starts in its other two wins this season, striking first against both Duke and Iowa, but this game did not follow a similar path. In fact, the high-scoring shootout proved to be unlike any the Cats have played in years.

The Cats stormed backed against the Spartans with explosive offensive play after explosive offensive play. Junior running back Justin Jackson zoomed for 29 yards to the end zone to cut the deficit to 14-7. Then sophomore quarterback Clayton Thorson connected with senior receiver Austin Carr to move the score to 17-14 after a Michigan State field goal.

By halftime the Cats had the lead. By the end of the night, they had their best offensive performance since 2011 and their first 50-point outing since 2012.

Both Carr and Jackson went on to have career days. Jackson finished with a career-high 188 rushing yards, while Carr captured a career-high in receptions with 11.

Meanwhile, Thorson shook off the errant first quarter throw picked off by Layne, putting together one of his best days as a Wildcat. He finished a stellar 27-for-35 with four total touchdowns and 281 passing yards.

“I think everyone kind of realized that the interception for a touchdown was my fault,” Thorson said. “Just try and weather the storm there for a little bit, and then we picked it up after that.”

Thorson was on the mark early in the second half, connecting with sophomore receiver Flynn Nagel for a 57-yard touchdown and running in another score to give NU a 33-17 third quarter lead.

The Spartans charged back, though, turning to previously benched quarterback Tyler O’Connor to lead their offense. He delivered two long touchdown passes over NU’s secondary to bring MSU within two points.

“We gave them Uncle Mo,” Fitzgerald said. “Momentum went over there to their sideline.”

But then the Cats took it right back — first with a 95-yard touchdown return from junior Solomon Vault on the ensuing drive and then with another long Jackson run six and a half minutes into the fourth quarter.

The touchdown trot from Jackson gave NU a 47-31 lead and Michigan State an insurmountable deficit. After the score, throngs of Spartans fans began to file out of the stadium.

“It’s nice to hear the silence,” Thorson said. “Silence is deafening for everyone else, but it feels good for us.”