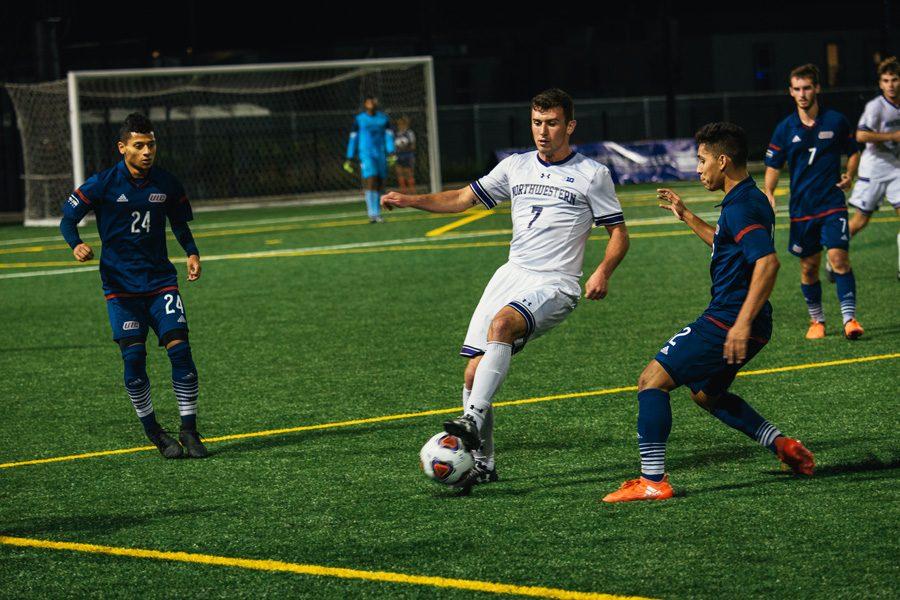 Sam Forsgren traps the ball in traffic. The junior attacker is a piece in a Northwestern offense that has been shut out in the last three games.

For the second time in two weeks, Northwestern will travel to the East Coast in search of a win when it heads to New Jersey to take on Rutgers on Friday.

To beat the Scarlet Knights (0-9-2, 0-4-2), the Wildcats (2-9-1, 1-3-1 Big Ten) will need to score — something they have not done in three games. The last time NU went this long without scoring was in October 2012, when it was shutout by Penn State, Northern Illinois and Wisconsin in consecutive games.

The scoring drought isn’t due to a lack of opportunities. Over the past three games the team has averaged nine shots a game, which is right on par with its season average of 8.9.

Although the Cats have had their chances, they simply have not been able to finish. Only 7.5 percent of all NU shots have found the back of the net, while the Cats’ opponents have converted nearly 10 percent of their shots.

Fortunately for NU, Rutgers is perhaps the one team in the Big Ten that has struggled more this season than Cats. The winless Scarlet Knights have been outscored by their opponents 29-9 in the process. Five of Rutgers’ nine goals came in a 6-5 loss to Florida Gulf Coast, a team the Cats beat.

NU will also benefit from the return of junior goalkeeper Francisco Tomasino, who was suspended against UIC due to a red card suspension.

“I thought Braden (Thuraisingham) did a good job, but (Tomasino’s) feet are a bit better, so we’re able to play out of the back more,” coach Tim Lenahan said.

With three Big Ten games left on their schedule, the Cats are seventh in the Big Ten. Although Rutgers sits in last, Lenahan said that the Cats can’t afford to underestimate the Scarlet Knights.

“They’ve played the second toughest schedule in the country,” Lenahan said. “So them not winning a game doesn’t change how we prepare for them.”