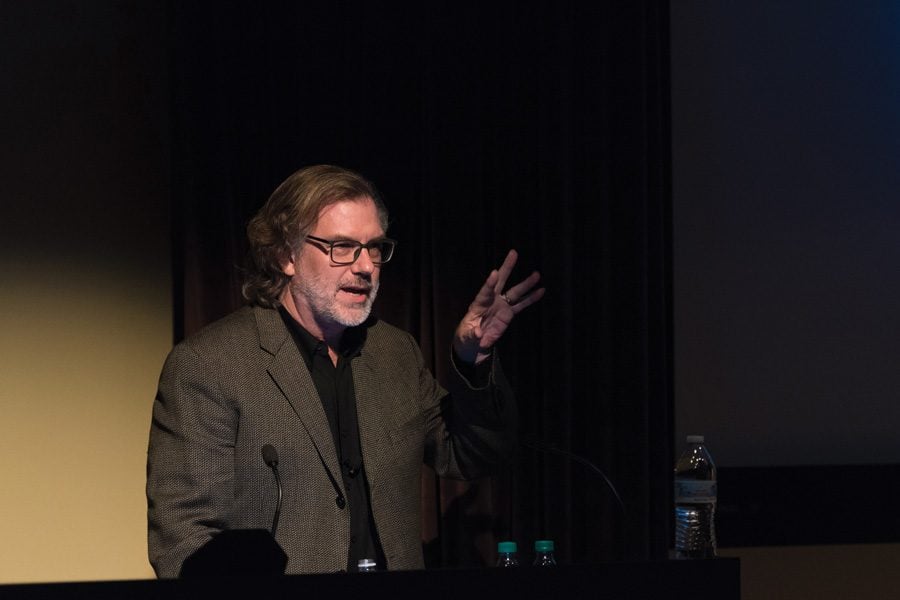 Seven-time Oscar winner Gary Rydstrom speaks to NU students and faculty about the importance of sound in storytelling. Rydstrom has created sound for movies such as Titanic and Jurassic Park.

Seven-time Oscar winner Gary Rydstrom stressed the importance of sound in storytelling, particularly in films, in a speech to students Thursday.

Rydstrom, who has designed and mixed sound for films such as “Jurassic Park” and “Toy Story,” addressed an audience of about 50 faculty and students at Annie May Swift Hall.

“Sound is a powerful emotional tool, and it is more powerful for the fact that people don’t realize that it’s there most of the time,” Rydstrom said. “This is the magic of sound, if you put sound against picture something magic happens.”

During the talk, Rydstrom remarked on the difficulties of sound editing and design, comparing it to “prospecting for gold.” He also played a series of clips from films with significant sound design, as well as a few of the sounds he created for Apple’s iOS 10.

“Rydstrom is one of the most influential sound designers of the past 20 years,” Radio Television and Film Prof. Jacob Smith said in his introduction to the speech. Smith is also the director of the new Masters of Arts in Sound Arts and Industries program, which put on the talk. The program is currently in its first year and has 12 graduate students.

Rydstrom was also the keynote speaker at Northwestern’s Sonic Boom Conference in 2014, which helped NU faculty and students connect with sound industry professionals.

“Not only did he inspire us at the Sonic Boom Conference, but he became an aspirational figure for us as we were designing this new program because he is someone who (thinks) about sound in terms of science, arts, technology and culture,” Smith said.

The MA students participated in a workshop with Rydstrom focusing on sound in filmmaking before the talk on Thursday, said Katherine Lelek, assistant director of External Programs, Internships and Career Services (EPICS) for the School of Communication. The students will also have an opportunity to network with Rydstrom on Friday.

Smith said the new MA program was inspired by conversations he had with Barbara O’Keefe, dean of the School of Communication, about the opportunity to connect students and professors across disciplines within sound studies.

“We are very excited about continuing to work in this area, using sound as a bridge across different areas of interest as a way to approach sound arts and industries in a new way that combines science, studies and production,” Smith said.

Patrick Hockberger, one of the 12 graduate students in the MA program, said the students in the program are just starting to transition from theoretical sound arts to working on concrete projects, so Rydstrom’s talk was “perfectly” timed.

Lelek said that Rydstrom’s talk was just one of many future events in the MA program.

“We’re really excited to welcome other guests throughout the academic year to help these students develop their professional voice and to impact other departments within the School of Communication,” she said.