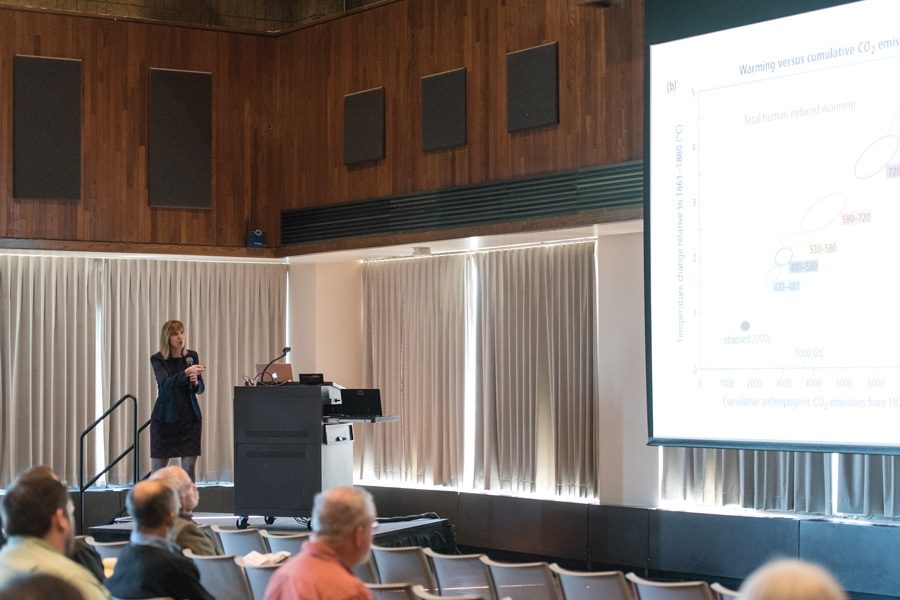 The University of Minnesota's Jessica Hellmann speaks at the annual Climate Change Symposium. She discussed international issues about climate change and greenhouse gases.

The goal of the annual event is to raise awareness about environmental issues. This year’s symposium, titled “Water-Energy-Climate Nexus,” was a collaborative effort between the Institute for Sustainability and Energy at Northwestern, the Department of Earth and Planetary Sciences and the Northwestern Center for Water Research.

“We got involved this year to develop this theme specifically relating water to climate,”
said Aaron Packman, director of the Northwestern Center of Water Research, in an interview with The Daily. “It’s been an annual event … to really explore different dimensions of the climate change problem from different perspectives.”

Jessica Hellmann, director of the University of Minnesota’s Institute on the Environment, discussed in her speech the 2015 Paris Agreement drafted at the COP21, an annual international conference about the environment. The agreement outlines a plan to cap the global temperature rise this century to below 2 degrees Celsius.

However, Hellmann said even a 2-degree change will have serious effects on the environment. Because cutting greenhouse gases alone will not be sufficient to deal with the effects of climate change, countries must create infrastructure such as wetland and irrigation to solve water issues caused by climate change, she said.

“We are working towards a 2 degrees goal that is about twice the amount of climate change that we have already,” Hellmann said. “We are essentially committing to continued greenhouse gas emissions for another decade. So if there was ever a time that adaptation was more solidified than ever, it’s coming out of Paris.”

Hydrologist Drew Gronewold spoke after Hellmann’s presentation about the effects of climate change on the Great Lakes. He said the Great Lakes’ water levels are declining as a result of global warming, a trend that is relevant to the Chicagoland area.

Gronewold said that, because climate change is a global issue, there is no one solution to address the problems it creates.

“There are a lot of important global and regional issues related to energy use and water use, and some of them are consistent across different regions, but there are also some very unique regional topics,” Gronewold told The Daily. “That makes it hard to create a consistent message on how we should respond to climate change and increase our efficiency of those uses.”

ISEN associate director Jeff Henderson told The Daily that the symposium was not intended to be an overly-academic event; rather, its goal was to be an accessible form of information for attendees.

Packman said organizers wanted to give audience members ideas on how to take action to combat climate change.

“I hope people have a clear idea what they can do with their personal lives and what we can do as a country to mitigate climate issues and to work more to solve these combined water-energy climate challenges,” Packman said. “One of the key messages is that personal action influences what we do in climate and that we know the political environment is very difficult, and we have to be active.”