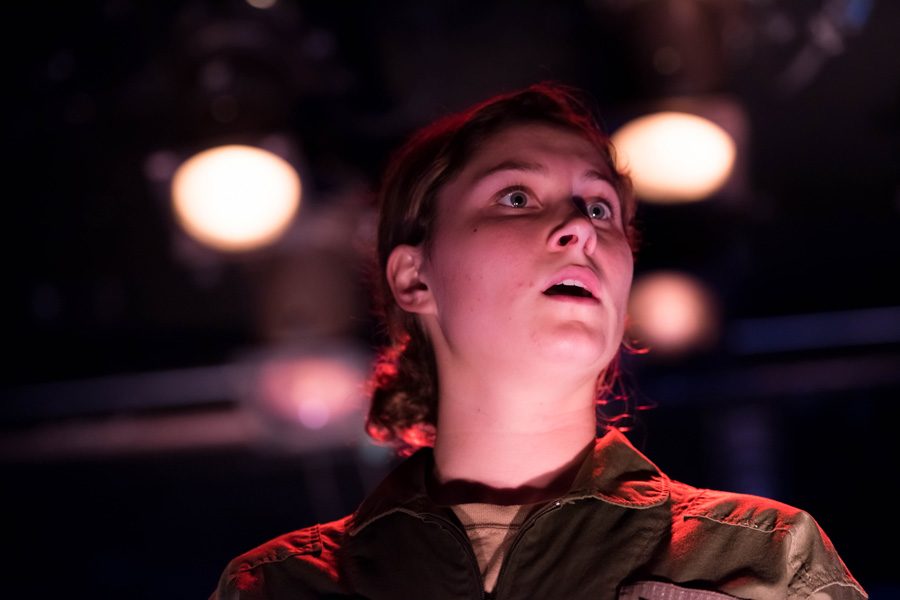 In The Jewish Theatre Ensemble’s fall mainstage production, all it takes is a single performer and a plexiglass box to tell a story about drone warfare, female empowerment, mental health and human empathy.

“Grounded” is a one-woman play that tells the story of a female fighter pilot who is demoted to a drone pilot and explores the challenges she faces in this new role.

Director Joan Sergay said she and producer Austin Manross chose “Grounded” because of its powerful storytelling, relevant messages and female-centric narrative. Manross, a Communication sophomore, said the duo wanted to do something “striking and monumental” but also relatable to the student population.

“It’s political but also personal,” said Sergay, a Communication senior. “I felt it was something a lot of people needed to see.”

“Grounded” takes place over the course of the Iraq and Afghanistan wars and examines drone warfare, terrorism and Middle Eastern involvement, said Tess Musky-Goldwyn, who plays the lead character in the show. She said her character’s narrative is complex as she struggles with mental health and post-traumatic stress disorder as well as motherhood and work-home balance.

The play, which premieres Thursday in Shanley Pavilion, is a one-woman show, which means the unnamed pilot is the only character on stage for the entire 75-minute run of the play.

“On a human level, this story is about a woman attempting to reconnect to what she has been most proud of in her life — what has made her most human,” said Musky-Goldwyn, a Communication senior. “I think that’s a universal thing.”

The military theme is not the sole focus of the production, and instead, there are “multiple entry points” for audiences to take interest in, Sergay said.

In the end, the play is most essentially about humanity, Musky-Goldwyn said. This was why she was able to connect with her character despite lacking first-hand experience with many of the pilot’s life circumstances. The underlying themes of love, power, sacrifice and empathy are all things she said she believes the audience will relate to and hopefully learn from as well.

In directing the production, Sergay said it was difficult to transition from directing multiple actors to focusing on just one. Musky-Goldwyn said the one-woman show was essentially an extended monologue, and memorizing her lines for the show was “a beast.”

But Manross said the single-actor format allows for deeper exploration of the pilot’s story and specifically highlights a woman’s voice. Both Manross and Sergay cited this focus on female storytelling as important to their selection of the work.

Musky-Goldwyn agreed that the female narrative was essential, especially coming from the military, which “has always been a place of male power and testosterone.” She sees parallels between her character and Hillary Clinton in that both are confident women breaking into traditionally male fields.

“Showcasing strong female characters like this in the theatrical world is important not only to the theater and to the modern American artist, but (it’s) important to spreading the significance of female power,” Musky-Goldwyn said.