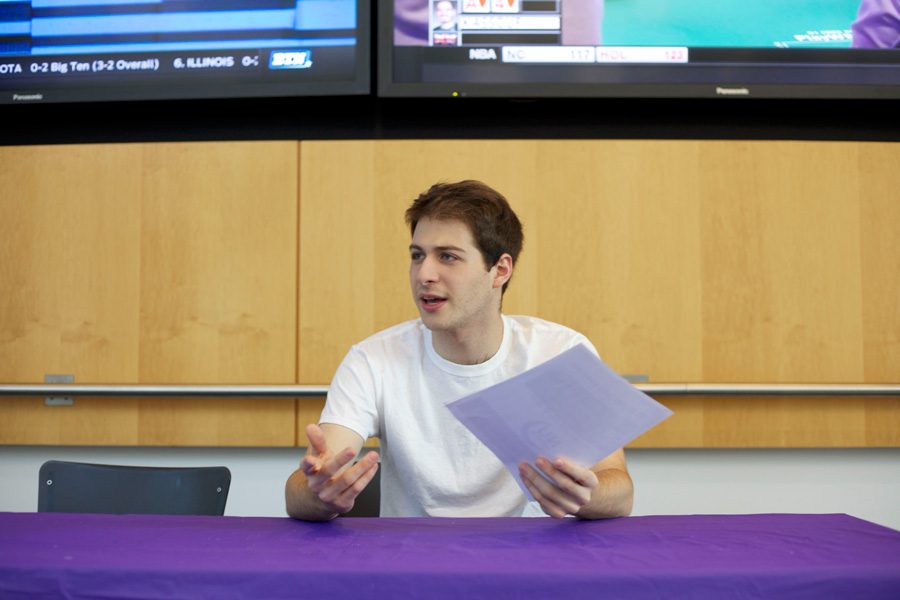 “Let’s talk about blacking out,” read the subject line of an email sent to Ryder Chasin from Liam Feroli. It wasn’t an invitation to a party, but a request for Chasin, a Medill junior, to be the new host of The Blackout, Northwestern’s first late night comedy talk show.

As an organization under a year old, The Blackout is still in the throes of self-definition, Communication junior Chelsea Jacobson said. Both stylistically and structurally, the show was based around Jacobson, who was the creator and original host.

When Jacobson started the show, part of the premise was that she was a female late-night talk show host, said talent scout Kathryn Karnaze. Now, the team is working to redefine The Blackout with Chasin as its frontman.

“They’re really giving me an amazing amount of creative direction and jurisdiction over what we’re actually doing and executing on the show,” said Chasin, who is also a staffer for The Daily’s video desk.

Jacobson said her biggest goal is to make The Blackout a core part of Northwestern’s comedy community, attracting a wider student audience.

This quarter, Jacobson is studying abroad in Paris. Her absence, along with the departure of former Executive Director Devon Kerr at the end of Spring Quarter, has forced the young organization to regroup and restructure the show.

Without Jacobson and Kerr, a Communication junior, the staff structure is morphing to fit the show’s demands. After more than 100 people signed up, Jacobson said they need a new system to accommodate the voices of all the people involved with the show.

“I took feedback from everyone and … people wanted to feel more that they could have a hands-on role,” she said.

Karnaze, a Medill sophomore, said Kerr’s former role as executive producer has been split into three positions for this quarter. She and Feroli, a Communication senior, find talent for the show and its sketches, Communication sophomore Max Kliman produces sketches, and Communication junior Peter Condie plans and coordinates the live show. Each producer works with a group of associate producers, allowing more direction for newer members than last year.

The host of the show was one critical role that remained vacant until this weekend. Now, Chasin, tapped by Feroli and Karnaze, is poised to fill the role starting later this fall.

“When we were looking at people for the fall, we wanted an established upperclassman who had a lot of experience in comedy and improv and acting,” Karnaze said. “His presence on stage was electrifying.”

Although Chasin had not previously been part of The Blackout, his involvement with other comedy organizations, including long-form improv group The Titanic Players, may bring new exposure to the show.

“Built into the talk show format is a way to get different people from different communities onto the show,” said Communication senior Ben Gauthier, who is also a member of The Titanic Players. “That brings different people to the audience and to the comedy scene in general, which can be pretty insular.”

The Blackout is scheduled to produce one live show this quarter.